Check out this sweet story about a high school football team's biggest fan: the coach's dad.

This high school football team's biggest fan may not be who you'd expect. 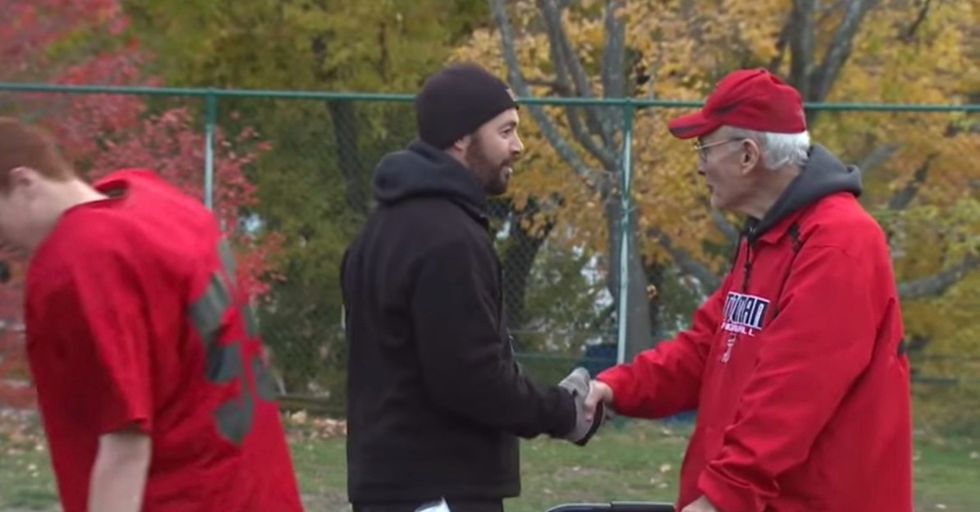 And he makes it to most of the high school football team's practices, too. He cheers on the team, builds awesome relationships with the teenage players, and shows support in any way he can.

Coach Dad chats with a student during practice. All images via WPRI.

They call him "Coach Dad" — he's the head coach's dad. And he happens to have Parkinson's.

76-year-old Phil "Coach Dad" Caito has had Parkinson's disease for 18 years. He says, "It's a chore to get through the day," but that's certainly not the only thing he wants to talk about in WPRI's report of his story.

"He comes to every game, and he always brings emotional support."

The players, including senior Nathan Gagnon, certainly love to have Coach Dad around. Dave Caito explains that he's glad his team gets to see firsthand the qualities he tries to nurture in them.

"If I could be half the man he is, I'd have an accomplishment."

"He's the best dad anyone could ever have. If I could be half the man he is, I'd have an accomplishment."

Coach Dad's role in the Tigers' team shows what it's like to have a truly amazing role model.

Having someone there to cheer you on during your best day doesn't even compare to having someone who's there with you through the hard days as well. And it's pretty darn awesome that he's normalizing living with Parkinson's at the same time.

To hear more from Coach Dad, check out WPRI's clip of the story, below: