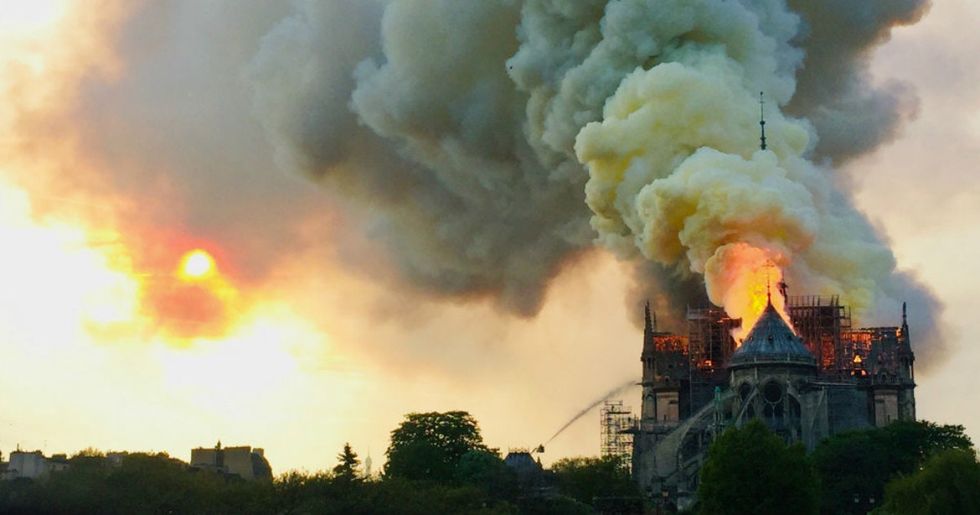 With events still rapidly unfolding in France, both President Trump and former President Barack Obama responded quickly to their millions of followers on Twitter.

Trump responded with a tweet offering some unsolicited advice on how first responders might best handle the tragic fire that quickly engulfed the historic structure:

So horrible to watch the massive fire at Notre Dame Cathedral in Paris. Perhaps flying water tankers could be used to put it out. Must act quickly!

It was a fairly typical tweet from Trump during a crisis moment. If you’re a fan of the president, it could be seen as the commander-in-chief offering some tactical advice on the global stage. He might not always be right but he’s always there, always present and always putting himself at the center of a moment. Of course, if you’re a critic of Trump, you could say all those same things but in a wildly different context.

And those critics have some extra ammunition at their disposal, as French officials sent out a tweet of their own, saying all options were on the table for saving the cathedral, literally except the solution suggested by America’s president:

"all means are being used, except for water-bombing aircrafts which, if used, could lead to the collapse of the entire structure of the cathedral."

Hundreds of firemen of the Paris Fire Brigade are doing everything they can to bring the terrible #NotreDame fire u… https://t.co/xxqVaExtiB
— Sécurité Civile Fr (@Sécurité Civile Fr) 1555357125.0

“God bless the people of France.”

In contrast, Obama sent out his own message to his 106 million followers just as the news of the tragic fire was gripping the world.

“Notre Dame is one of the world’s great treasures, and we’re thinking of the people of France in your time of grief. It’s in our nature to mourn when we see history lost – but it’s also in our nature to rebuild for tomorrow, as strong as we can.”

Notre Dame is one of the world’s great treasures, and we’re thinking of the people of France in your time of grief.… https://t.co/aXv1azpmof
— Barack Obama (@Barack Obama) 1555359932.0

Again, supporters of Obama will see an articulate, compassion and nuanced response from the former commander-in-chief offering support, vision and energy in the face of tragedy. While his critics Obama might see see a long-winded, empty gesture.

In their own way, both men were trying to offer support as the world grappled with a tragedy that’s almost impossible to immediately process.

So many of us see history as untouchable. Something that has survived for so long and endured through chapters of world changing history surely couldn’t succumb to a random accident. However, that’s exactly what happened. And how the world’s last two most powerful leaders responded is a prism through which we can interpret so much.