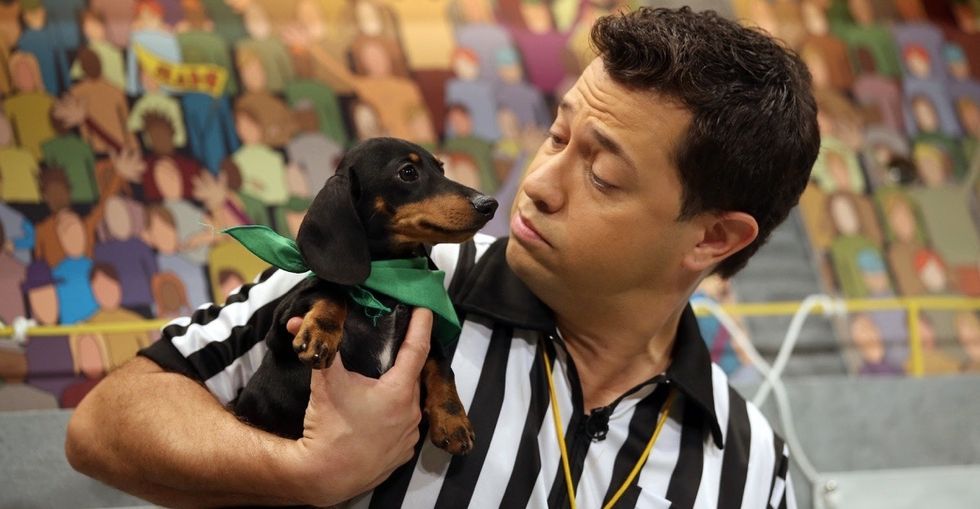 Halftime shows and mind-bogglingly expensive commercials have their place at the Super Bowl.

Your Super Bowl 50 halftime show performer, Chris Martin (and presumably the other guys in Coldplay). Photo by Timothy A. Clary/AFP/Getty Images.

But can we all just admit that this Super Bowl weekend, we're most excited about the puppies?

"I'm just here so I won't get fined." Photo by Amanda Edwards/Getty Images for Discovery Communications.

This Sunday is Puppy Bowl XII (that's 12 for those of you who don't speak football).

Puppy Bowl is Animal Planet's annual competition celebrating the agility, quickness, and strength of adolescent dogs. Alliances are formed and tested as "quarter-barks" and "wide-retreivers" leave it all on the gridiron for this, their one shot at glory.

It's two glorious hours of puppies in bandanas playing with assorted squeaky toys.

The Puppy Bowl is the very definition of carefree fun.

No ego, no poor sportsmanship, just lots of fierce competition.

There are even cameras under the water dish and so you don't have to miss a moment of the action.

Speaking of action, don't sleep through the kitten halftime show. Or the chicken cheerleaders.

Those little guys are ready for their 15 minutes of fame too.

I know what you're thinking: "But what about egregious puppy-related fouls?"

Don't worry, the Puppy Bowl has a "rufferee." He's human, but don't hold that against him.

His name is Dan Schachner and this is his fifth time officiating the game. According to his official Puppy Bowl biography (I know, this whole thing keeps getting better), Schachner's favorite penalties to call include“Ineligible Retriever Downfield,” "Paws Interference," and "Illegal Napping."

Dan Schachner hard at work on the best job ever. Photo via Discovery/Animal Planet, used with permission.

While Puppy Bowl is a carefree (and non-CTE-causing) way to enjoy the Super Bowl, it also supports pets in need of homes.

While the event is a fun and adorable tradition, first and foremost, it's a big adoption campaign.

The dogs and cats you'll see on Sunday come from 44 animal shelters across 25 different states and Puerto Rico. The dogs are all eligible for adoption, and given their athletic prowess (and major adorability), they should have no problem finding forever homes.

Puppies, with their sleepy faces and chubby little legs, are highly desirable candidates for adoption. Adult and senior dogs, on the other hand, often end up under the care of shelters when their caretaker moves, passes away, or can no longer afford medical care.

Older dogs have a more challenging time getting adopted, and many end up languishing in shelters, where their health often suffers.

An elderly dog takes a break at a pet store. Photo by Kazuhiro Nogi/AFP/Getty Images.

Puppy Bowl teamed up with the Pro Football Hall of Fame to encourage people to consider adopting these "veteran" dogs.

Think there aren't many perks to adopting an older dog? Think again.

"Some people think of senior dogs as lethargic and too set in their ways," Goodin said. "On the contrary, senior dogs do everything that younger dogs do, without the drama."

"Adult and senior dogs are past the chewing phase," she said. And "adult and senior dogs sleep when you sleep, they won’t keep you up all night. Many are already trained and housebroken, and they're usually a little bit calmer than their younger counterparts."

With those factors in mind, adult and senior pets are actually a better fit than puppies for many individuals and families. All they need is a moment in the spotlight, which a few lucky dogs will get this Sunday.

So this weekend, save your loudest cheers (and a little bit of that bean dip) for a few deserving dogs.

Because when animals in need find a safe place to call home, everybody wins.