Lately, friends are hard to come by. 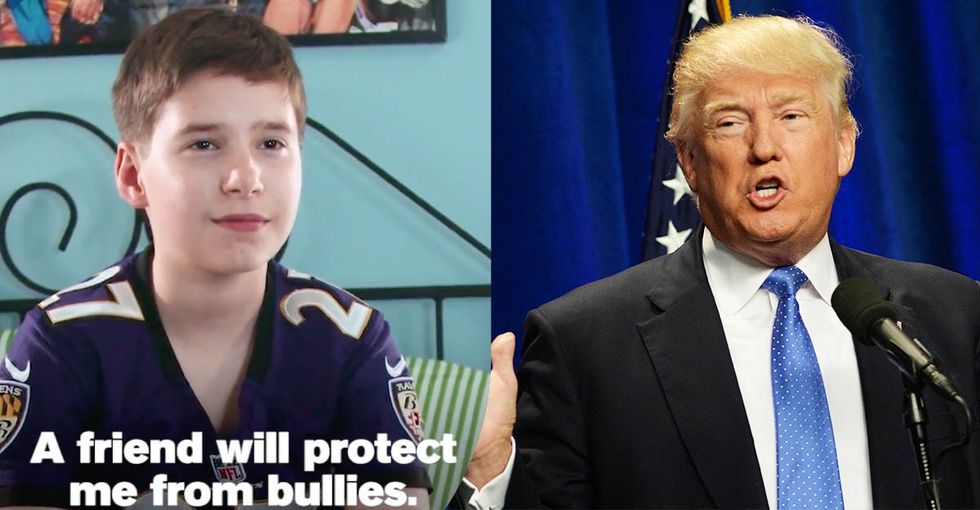 "Ask yourself who is really the friend of women and the LGBT community, Donald Trump with actions or Hillary Clinton with her words?" said Donald Trump during a June 13, 2016 speech.

The speech, which was recorded the morning after the shooting at Orlando's Pulse nightclub, features then presidential candidate Trump slamming his opponent over her support for Muslims and refugees, suggesting that he would be a true friend to lesbian, gay, bisexual, and transgender Americans.

Six months into Trump's presidency, the Human Rights Campaign revisited that promise to see if he is the friend to the LGBTQ he said he would be.

In a new video from HRC, trans kids share what it means to be a friend.

The running theme through the kids' responses is simple: They just want to be accepted, protected, loved, and allowed to live happy lives free from bullying.

That all seems pretty reasonable and really shouldn't be so much to ask.

By these standards and "with his actions," President Trump is not a friend to the LGBTQ community.

On February 22, Trump's Department of Justice and Department of Education rescinded a May 2016 letter of guidance instructing school districts around the country to protect trans kids from discrimination in schools. It was a major WTF moment for anyone who thought the administration would make good on its pro-LGBT promises; and for those who had their doubts, it was a confirmation of their worst fears.

That 2016 letter was the kind of thing Joe Biden might call a "big effing deal," making it clear that trans students have a right not to be bullied or discriminated against. In other words, it was a sign they had friends in the White House. Now? Not so much.

"From rescinding lifesaving guidance protecting transgender students to appointing anti-transgender officials and judges, Donald Trump has proven time and time again that he is no friend to our community. Quite the opposite," says Sarah McBride, HRC national press secretary.

The good news is that anti-LGBTQ attitudes in the White House aren't enough to undo all of the progress we've made.

Trump's administration has been pretty hostile to LGBTQ people, in general, but that's no reason to give up hope.

McBride dismisses Trump's offer of friendship as yet another one of his administration's "alternative facts," but she points to one victorious bright spot from 2016: North Carolina. The state, which earlier in the year had enacted one of the nation's most oppressively anti-LGBTQ laws, rejected its governor's reelection bid in favor of a challenger who ran on repealing it.

"We saw that when trans voices are heard and our allies stand up, we can still make the politics of discrimination and misinformation no longer effective," she says. "That power to effect transformation change remains."

McBride made history as the first transgender woman to address a major political party's convention when she spoke at the 2016 Democratic National Convention, and has been a tireless advocate for equality. GIF from PBS Newshour/YouTube.

Allies are an essential component of the path forward for the rights of trans kids, and there are some specific things we can all do to help out, such as speaking out if we see kids being bullied by teachers, classmates, or even the government. Additionally, we can support organizations like HRC in their fight for full equality and call our elected officials to ask them to reject efforts to discriminate.