13 ways Trump's been terrible for LGBTQ people during his first 5 months.

Has he really been that bad for LGBTQ people? Let's retrace our steps. 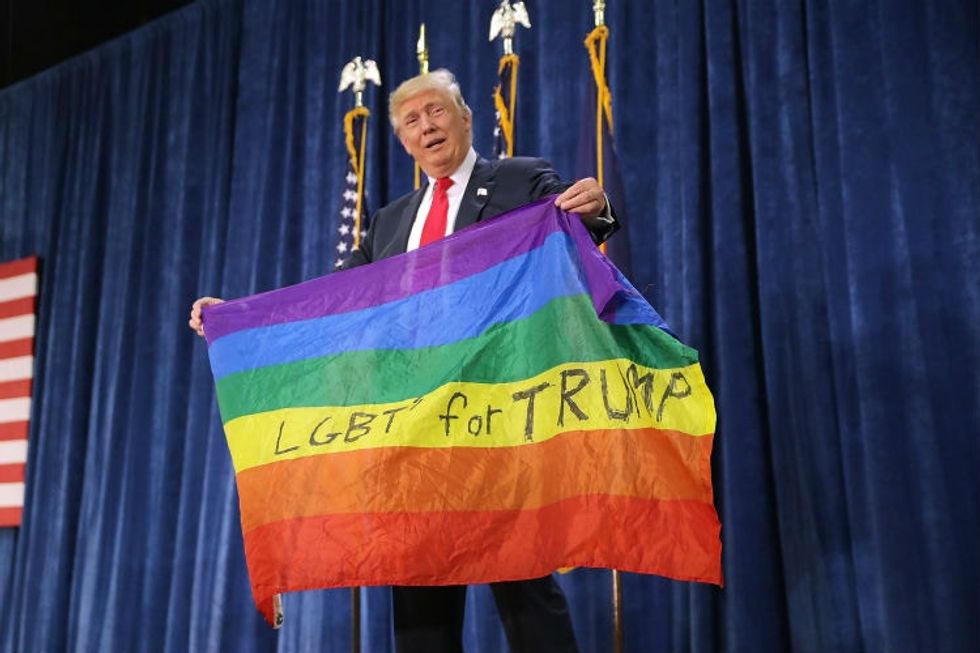 Donald Trump at a campaign rally in Colorado in 2016. Photo by Chip Somodevilla/Getty Images.

The assurance — seemingly the first time LGBTQ rights were acknowledged by a nominee at a Republican National Convention — came as a sigh of relief to some LGBTQ people and allies hoping for continued progress on queer rights, even in the event that Trump would win the election: Could lesbian, gay, bisexual, and transgender Americans finally have a Republican ally in the White House?

To find out if Trump's promise held up, let's recap the first five months of his presidency as it pertains to LGBTQ rights:

With Trump's approval, the Justice and Education Departments rejected guidelines suggested under President Barack Obama that allowed trans students across the country to use the bathroom that corresponds with their gender.

The reversal gives state and local officials more sway in forcing kids to use the bathroom that aligns with the sex they were assigned at birth — a move that puts them even more at risk of violence.

2. Trump stopped data collection on LGBTQ seniors, making it difficult to know if and how certain programs affect them.

The Trump administration pulled questions relating to sexual orientation and gender identity from an annual survey given to seniors by the Department of Health and Human Services.

The data collection is crucial in pinpointing where and how federal dollars should be spent on programs benefiting older Americans, NBC News reported, and could negatively affect services like transportation, caregiver support, and home-delivery meals for LGBTQ seniors.

3. Trump has surrounded himself with blatantly homophobic and transphobic officials with huge influence over policy.

Bringing years of abhorrent views on LGBTQ people and their rights to Washington, Trump's cabinet truly does showcase a remarkable collection of bigotry, Michelangelo Signorile reported in The Boston Globe.

While he was governor of Indiana, Vice President Mike Pence signed a bill into law allowing businesses to discriminate against LGBTQ patrons based on religious beliefs and supported conversion therapy — a form of child abuse — for LGBTQ children.

Unsurprisingly, none of these people have showed signs of changing their beliefs on LGBTQ rights since taking office.

4. Trump's messaging and America-first fiscal priorities are emboldening anti-LGBTQ movements around the world.

The "Trump Effect," as The Daily Beast coined it, is empowering hate groups worldwide — not only in regions like the Caribbean and Latin America, but in even the most LGBTQ-friendly countries, like the Netherlands and the U.K., according to OutRight International.

What's more, whatever budget passes through a GOP House and is signed by the president will likely slash tens of millions of dollars in funding for programs that prevent HIV transmission and protect LGBTQ people from persecution overseas.

5. Trump has done nothing to stop — or even condemn — the mass arrests and murders of gay, bisexual, and transgender men in Chechnya.

Since April, at least 100 LGBTQ men have been arrested, tortured, and even killed by law enforcement — all while the Chechen government refuses to acknowledge LGBTQ people even exist there.

Many world leaders have spoken out against the atrocities. Not Trump.

In early May, Trump signed an executive order that eased guidelines prohibiting churches from being politically active, Reuters reported. With the move, pastors and religious figures can more freely endorse political candidates without losing their tax-exempt status — a move that could result in more anti-LGBTQ political rhetoric being spewed from the pulpit.

And the order doesn't stop there.

7. Trump has allowed certain religious organizations to discriminate when it comes to health care provisions for LGBTQ employees.

Under the same executive order, religious groups can now more easily deny health insurance to employees when the care conflicts with their beliefs. A Christian charity group, for example, could legally refuse to cover certain drugs related to HIV prevention or the costs associated with gender confirmation surgery for a trans person.

That is, Rabbi Denise L. Eger wrote for NewNextNow, "private health decisions between an individual and their medical team will be affected by the religious views of their employer."

8. Trump is fighting for health care reform that would force thousands of HIV-positive people off their care.

LGBTQ Americans (particularly gay and bisexual men of color and trans women) have been disproportionately affected by the AIDS epidemic, which is why moves by the GOP to overhaul the Affordable Care Act is setting off alarm bells for advocates everywhere.

Behind closed doors, Republicans are drafting a health care bill that will likely reverse the bulk of key Obamacare provisions. Earlier legislative efforts suggest the bill, if passed, could decimate our progress on defeating HIV/AIDS by dismantling the Affordable Care Act's Medicaid expansion and making certain HIV drugs inaccessible to those who need them most.

Trump's complete disregard for prioritizing a national strategy on the issue is one big reason why a number of experts just resigned from the White House's HIV/AIDS advisory panel.

"As advocates for people living with HIV, we have dedicated our lives to combating this disease and no longer feel we can do so effectively within the confines of an advisory body to a president who simply does not care," the experts penned for Newsweek on June 16.

9. Trump's education department is scaling back civil rights investigations, hurting kids who are transgender in the process.

The Washington Post reported on June 17 that the Department of Education is dropping a consequential discrimination case involving a trans student in Ohio who was harassed by teachers and students and barred from using the bathroom that corresponds with her gender.

Because Trump rescinded federal guidelines protecting trans students in February (see #1 on this list), the department reversed its decision to deem the school's actions as discriminatory, officials said.

It may be just one case — but it's indicative of an even more worrying big picture. The move is part of a larger shift away from enforcing civil rights laws through the department, and that change in attitude and policy is one the Ohio student's advocates are calling "dangerous" for LGBTQ students nationwide.

10. Trump is quietly removing mentions of LGBTQ people and their rights on federal webpages.

The Obama White House's LGBTQ page has been replaced with this generic page.

Just as Trump was inaugurated into office, several White House pages on various issues temporarily disappeared as the new administration took over — not an uncommon hiccup during a presidential transition. Obama's page dedicated to LGBTQ matters, however, still hasn't been replaced.

On June 15, the Department of Commerce removed sexual orientation and gender identity from a list of protected groups in its equal employment opportunity statement, BuzzFeed News noticed. (After the report published —and the department faced swift backlash — the list was updated to include LGBTQ protections once again.)

A transgender refugee from Honduras who is temporarily staying in Mexico hopes to make it to the U.S. eventually. Photo by Guillermo Arias/AFP/Getty Images.

Trump's executive order on immigration served as a blanket ban on refugees coming from a handful of Muslim-majority countries. Among those fleeing their homelands for safety and security, though, are LGBTQ people escaping persecution based on their sexual orientation or gender identity.

Take Ramtin Zigorat. He's a 27-year-old LGBTQ activist and refugee stranded in Turkey after being sentenced to death in Iran for being gay. The UNHCR had granted him admission to the U.S., but that was put on hold after Trump's travel ban. He's one of many.

"Maybe they will kill me tomorrow," he told CNN back in March. "You always live with this fear."

12. Trump decided against including questions related to sexual orientation or gender identity on the 2020 census.

Questions on those matters have never been on the census. But a proposal to include them in the 2020 survey was rejected by the Census Bureau, leaving LGBTQ people invisible, yet again, in one of the most crucial collections of federal data we have.

If data doesn't exist on a marginalized population, it becomes impossibly more difficult to service their specific needs.

13. Trump nominated Neil Gorsuch — a right-leaning justice with a questionable track record on LGBTQ rights — to the Supreme Court.

Arguably one of the most lasting impacts Trump will have on civil rights is his picks for the Supreme Court — which is why his decision to nominate right-leaning Gorsuch has LGBTQ advocates on edge.

"For a conservative, he may stake out some admirably unorthodox positions on the bench," wrote Slate's Mark Joseph Stern after noting Gorsuch's bigoted stances on transgender equality and gay marriage. "But an embrace of LGBTQ rights will not be one of them."

So, to get back to the initial question: Do lesbian, gay, bisexual, and transgender Americans finally have a Republican ally in the White House?

The evidence speaks for itself.