An Australian man used a water polo team to propose to his boyfriend. It's darn cute. 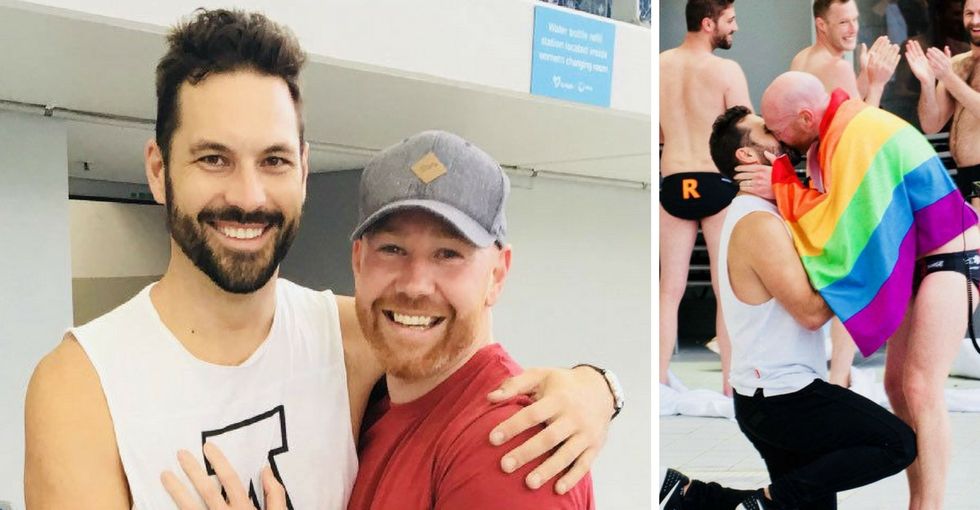 They didn't expect it, but Mark and Andrew's marriage proposal pics have made a big splash in Australia.

They're in the first wave of couples who have decided to tie the knot in the wake of Australia's vote on marriage equality. The way Mark went about pulling off his proposal to Andrew, however, stands out from the rest in a pretty adorable fashion.

The day after Australia's same-sex marriage survey results were announced, Andrew had a water polo match with his team, the Melbourne Surge. When the game ended, Mark approached Andrew poolside and wrapped him in a big rainbow towel as one of the couple's favorite songs, Jess Glynn’s "Hold My Hand," began playing.

"We wake up to that song every day," Mark told the Star Observer. "Wherever we go we always hold hands because we both love each other, and we’re proud of that."

Then, the couple's loved ones — who were waiting in the stands — began pulling out large photographs of Mark and Andrew.

And Andrew's teammates unveiled the cheekiest part of the proposal: swimsuit bottoms that spelled out "Marry me?"

"Waterpolo is [Andrew's] life, and the mates that play are his pseudo-family considering his immediate family live in New Zealand," Mark says. "I knew I had to involve them."

That's when Mark got down on one knee and asked the big question.

The charming proposal has gone global in large part because of its timing.

While Mark and Andrew knew they wanted to get hitched — and they technically could have in Andrew's home country of New Zealand, where marriage equality has existed legally since 2013 — the proposal was particularly special having happened on Nov. 16, 2017, in Australia, the day after the country voted overwhelmingly in favor of marriage equality in a mail-in survey.

The vote itself doesn't legalize same-sex marriage, but the results pave the way; Prime Minister Malcolm Turnbull said a parliamentary vote should decide the matter by Christmas.

"We both shed a tear during the marriage equality announcement as it was such a relief that we all can, pending the government's commitment to legislating change, now marry the person we love," Mark says.

He understands their engagement doesn't just mark a personal moment of love; it reflects a larger societal shift that's worth celebrating: "We're more than happy for the attention if it helps tell the story of Australia's acceptance and validation of marriage equality." ❤️