Alan Alda just revealed he has Parkinson's Disease. Here's how he wants to help others. 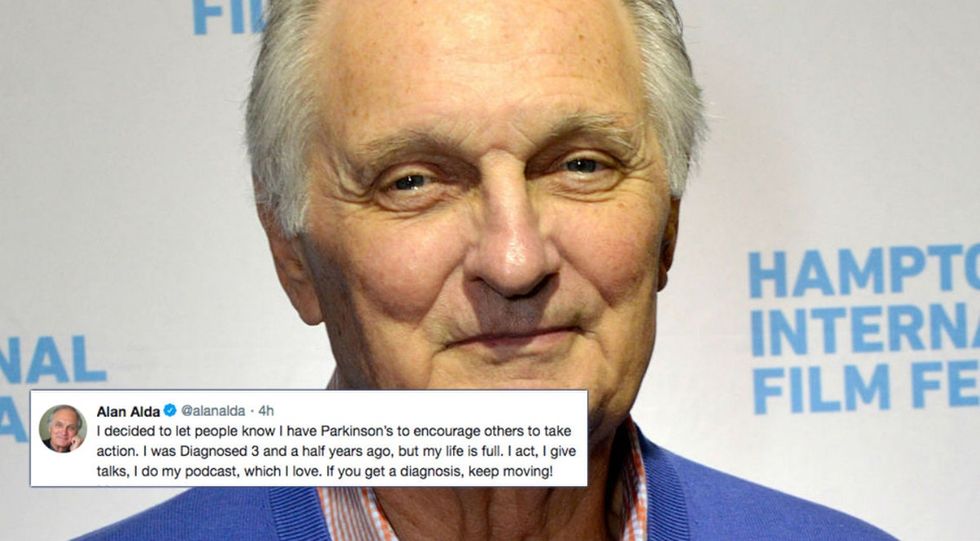 Alan Alda received a scary diagnosis but he‘s choosing to face it with courage and service.

To an entire generation, he was “Hawkeye,” the peace-loving soldier on “M*A*S*H."

But the 82-year-old actor is creating a new legacy for himself as he opens up about living with Parkinson’s disease.

During an interview on July 31, Alda revealed he was diagnosed three years ago. “I think because I'm sort of well-known, it might be helpful to people to hear the message that there are things you can do,” he said. “You can learn about things and not follow quackery, but find out what real science is coming up with. That helps.”

NEW: Actor @AlanAlda just revealed he has Parkinson's disease. The award-winning actor says he was diagnosed with t… https://t.co/RhXrbT2gc2
— CBS This Morning (@CBS This Morning)1533039579.0

He knew the story would come out but he’s choosing to define the narrative.

Alda has continued to act since his diagnosis, deciding when to reveal the news publicly.

“I could see my thumb twitch in some shots, and I thought, ‘it's probably only a matter of time before somebody does a story about this from a sad point of view,‘ but that's not where I am," he said. “I've had a richer life than I've had up until now."

"This is not to short change people who are suffering with real severe symptoms," he added. But for those who can still remain active, Alda is letting people know they are not alone and even offering some of delightful — and impressive — tips for staying active.

"I'm taking boxing lessons three times a week,” he said. “I do singles tennis a couple of times a week. I march to Sousa music because marching to music is good for Parkinson's."

Not surprisingly, Alda hasn’t stopped entertaining and informing audiences around the globe. He hosts a podcast on communication and used to host a long-running show on science.

Now, he’s taking the stage in an act of public service to bring hope and comfort to others facing Parkinson’s disease — and that’s a role worth celebrating.