After Trump won, they decided to get married. And invited 3 million people to join them. 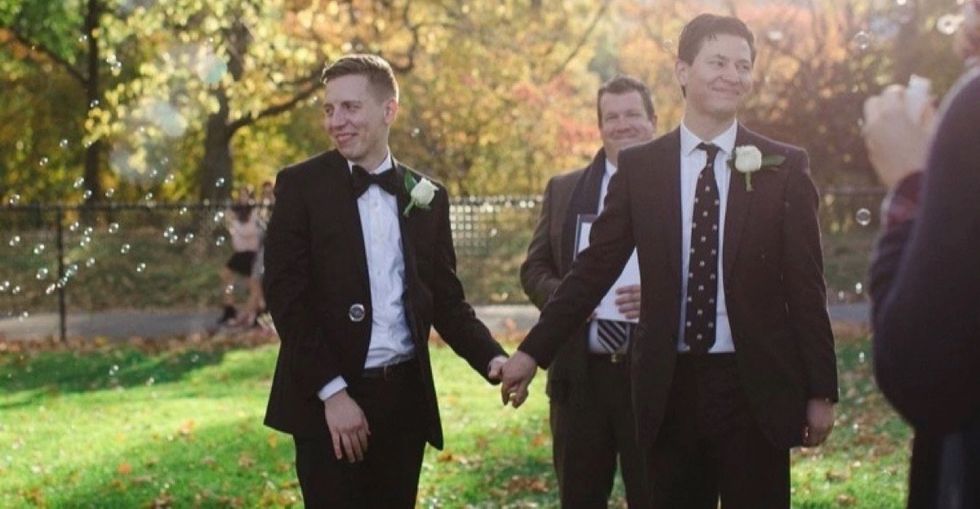 The afternoon was colder than usual, but the couple smiled, warmed by the occasional sunbeam and the confidence that things were about to change for the better. Sure, they'd been engaged for a year, but this day, their wedding day, happened like a goodnight kiss: slow at first, then all at once.

Just days prior, the couple had no clue they'd be getting married so soon. Their quick wedding had everything to do with Donald Trump.

"We were big Clinton supporters so [the election] hit us very hard," Sanders wrote in an email. "We had been considering getting married sometime soon, but I don't want anyone to get the impression that we got married last Saturday out of fear. "

Instead, they say they wed as tribute to an era of almost unimaginable positive steps for the LGBTQ community, diversity, and inclusion: from the election of the country's first black president and the repeal of Don't Ask Don't Tell to marriage equality reaching all 50 states. The happy couple wanted to be a part of it, especially with the future looking so uncertain.

"We don't know what the next historical era holds but so far, it is looking to be unsettling," he said.

After proposing one more time to Seifert, Sanders sent an invite to his friends and 3 million strangers to their wedding, which suddenly was just three days away.

Sanders, a member of the private Clinton fan group Pantsuit Nation, shared news of his impending wedding with the groups more than 3 million members. His post received thousands of likes and shares. When complete strangers started asking for an invite, Sanders went with it and invited the well-wishers to join him and Seifert at Sheep Meadow in Central Park.

"My husband is self-admittedly quite shy so when I had to break it to him that I might have accidentally invited 3 million people to our wedding, he was a bit shocked," Sanders said. "Once he started reading all of the love, his eyes welled up too and he couldn't say 'no' to inviting these strangers who wanted to share in our happiness. "

The day arrived and Josh, Jesse, their friends, and a few joyful strangers from across the northeast came out to celebrate in Central Park.

There were hugs, well wishes, presents, and even a handmade sign. One guest from Pantsuit Nation, Karen Seifert (no relation to Josh) is a photographer. She volunteered to take their wedding photos.

"The combination of friends and family we had known for such a long time and strangers who had simply been touched by our story gathered around me and the love of my life, watching us consecrate our union was the single most incredibly profound event I have ever experienced," Sanders said.

Of course, Jesse and Josh aren't the only folks from the LGBTQ community reacting with love and hope in the wake of this life-changing election.

Bethany Johnson of Springfield, Missouri, woke up on Nov. 10 with a knot in her stomach following the election. Johnson, a 37-year-old transgender woman, had recently moved back to Springfield, Missouri, and decided to take a small but hopeful step by sprucing up her white picket fence and painting her gate rainbow colors.

She started her project with gusto, but after a run-in with Trump supporters at the hardware store, Johnson got discouraged. She even considered dropping everything and moving to Canada. But after talking to some of her friends, she decided to stay and fight — not with fists, but with kindness.

"I realized that it is wrong to leave people here who will be doing the work for the society I want," Johnson said in an email.

She got up and met her neighbors, handing out homemade biscuits and telling them how fearful she was. But reaching out and meeting people face-to-face helped.

"I came home after talking to all of those people and I painted my fence and my gate," she said.

But for every story of love, hope, and kindness in the wake of the election — like this wedding or the rainbow fence — there is also a story of fear and concern.

Following Trump's victory, Jessica (who preferred not to use her last name) in Georgia is frightened and feverishly scraping together money and legal counsel so her wife can legally adopt their son in case their marriage is thrown out in the courts.

"We're legitimately scared for our family," she said.

It's unknown what Trump, Congress, or the Supreme Court will or won't do for LGBTQ citizens. But if the Republican platform is any indication, representatives at every level and branch may try to roll back the clock on civil rights.

These weddings, fears, and fences prove that we need to turn our emotions into action this year.

"We can be mad about the election or mad about things that have been said by people on both sides," Johnson said. "But that anger has to turn into some kind of positive action for all of us eventually."

It might be meeting your neighbors. It might be attending a stranger's wedding. It might be painting a fence, or volunteering in the community, or making preparations for the months to come to protect yourself and others. But mostly, it will be listening — really listening — to people who feel marginalized and left behind by the new administration.

But what I hope we don't forget as we walk forward is the possibility of this moment in the sun.

The possibility that exists between these two men, hand in hand with the one they love most.

"Channel the negative emotions into positive change," Sanders said. "Look at your fellow man with compassion and look for every way you can help."