A viral video about one gun owner's response to Parkland comes with a powerful message.

Scott Pappalardo of Middleton, New York, has always loved guns, but now he's having a change of heart. 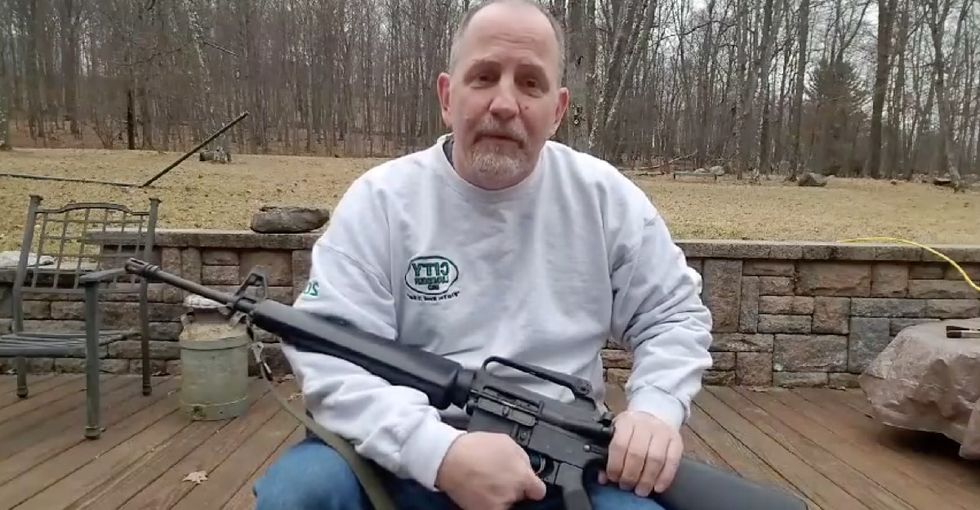 Scott Pappalardo loves guns and his right to own them so much that he has the Second Amendment tattooed on his body — but now he's having a a change of heart.

In a video, now seen more than 17 million times, New York-based Pappalardo discusses why he felt a moral responsibility to get rid of his AR-15, a gun he's had for more than 30 years. He talks about how after the Sandy Hook massacre, he would have gladly traded in his weapon if it meant saving even one life and how the lack of action taken by both himself and the government made him feel as though like he needed to do something — now.

"I guess my words [after Sandy Hook] were just empty words in the spur of the moment and now here we are, 17 more lives lost," he says, referencing the recent Florida school massacre.

He decided to not only get rid of his AR-15, but to ensure that it could never be used to take someone's life.

"I’ve decided today, I’m going to make sure this weapon will never be able to take a life. The barrel of this gun will never be pointed at someone. I mean, think about it. Is the right to own this weapon more important than someone’s life?" he says before taking a power saw to the gun, effectively destroying it.

Sure, he could have probably gotten $600 to $800, he estimates, for his gun. It's even likely the buyer would have been a responsible gun owner, like he was. Still, there was the off chance that his weapon could find its way into the hands of a child or someone set on committing a crime, and he didn't want to have that on his conscience.

Pappalardo captioned the video, "My drop in a very large bucket #oneless."

My drop in a very large bucket#oneless

Others, like Ben Dickmann, were also inspired to take their weapons out of circulation and did that in a number of ways.

Dickmann documented his decision to surrender his AR-57 to the Broward County Sheriff on Facebook, saying, "I'm putting my money where my mouth is." The day earlier, in a separate Facebook post, he called on others to take similar action.

"No one without a law enforcement badge needs this rifle," he continues. "This rifle is not a 'tool' I have use for. A tool, by definition makes a job/work easier. Any 'job' i can think of legally needing doing can be done better by a different firearm. I enjoyed shooting this rifle immensely but I don’t need it, I have other types I can shoot for the same enjoyment. I have surrendered this rifle to the Broward Sheriff at the Tamarac Post. I could have easily sold this rifle, but no person needs this. I will be the change I want to see in this world. If our law makers will continue to close their eyes and open their wallets, I will lead by example."

I’m putting my money where my mouth is (from yesterday’s FB post). This is an AR-FiveSeven, I own this rifle. It’s a...

These actions may be, as Pappalardo says, just a "drop in a very large bucket," but it's a start. Taking guns out of circulation helps prevent them from falling into the wrong hands.

There are hundreds of millions of guns across the country. Of course it's not realistic to suggest that each and every one be confiscated and eliminated. What's realistic asking people — the good, responsible gun owners — what possible use they have for AR-style semiautomatic weapons. Both Dickmann and Pappalardo admit the guns are really fun to fire, but it's worth examining what the actual practical uses of these weapons are.

Good on Dickmann and Pappalardo for making decisions they feel personally comfortable with, and hopefully they'll help inspire others to reflect on their own gun collections.