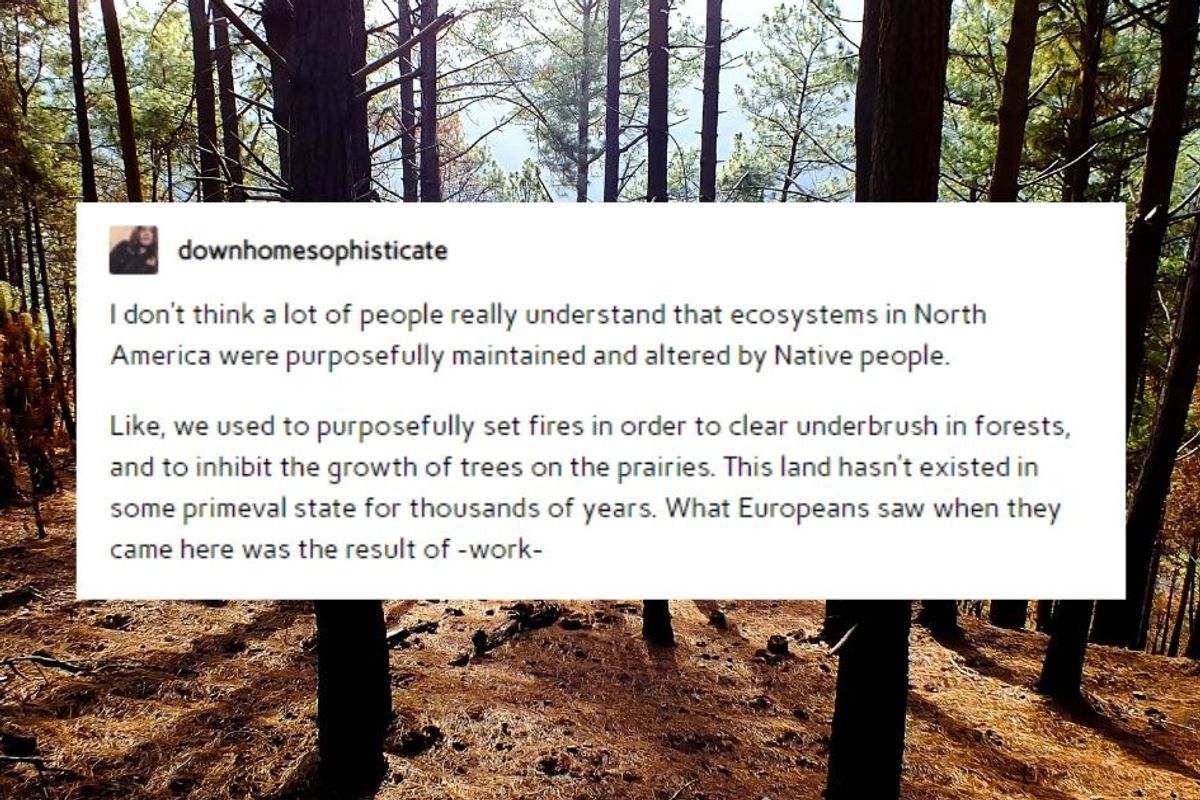 Photo by Anthony Gotter on Unsplash, Screenshot from tumbler

Environmental catastrophes like the recent Australian bushfires and ecological travesties like plastic-filled whale stomachs serve as stark reminders of our precarious relationship with our planet. While many of us call for greater sustainability in all areas of life, we don't really know what that looks like—which is why we should listen to those who do.

Unfortunately, ignorance about Native cultures and history prevents many people from looking toward indigenous wisdom when it comes to environmental issues. Many of us tend to think of sustainability as something new and innovative rather than a way of life that has already been accomplished in multiple places by multiple peoples.

A viral Facebook post from The Audacity of the Caucasity illustrates this point beautifully. A screenshot of a post on tumblr shows three people's posts about how Native people didn't just live in harmony with nature, but actively and purposefully managed the land to meet their own needs while also maintaining healthy ecosystems.

The first, from @downhomesophisticate, reads:

"I don't think a lot of people really understand that ecosystems in North America were purposefully maintained and altered by Native people.

Like, we used to purposefully set fires in order to clear underbrush in forests, and to inhibit the growth of trees on the prairies. This land hasn't existed in some primeval state for thousands of years. What Europeans saw when they came here was the result of -work-"

Then @feministdragon explained in more detail what that work entailed:

"The east coast was all mature and maintained food forests. Decades if not centuries of nurturing and maintenance. When the British arrived, they were amazed that there were paths through the forest just 'naturally' lined with berries and edible plants, like a Garden of Eden. Then they tore that shit down to grow wheat."

Finally, @worriedaboutmyfern shared what they'd learned from their mom, who happens to be an ethnobotanist.

"My mom is an ethnobotanist and getting people to understand this is literally her life's work. A lot of native tribes just had a whole different way of looking at agriculture. Instead of planting orchards in tidy rows near their villages, they went to where the trees were already growing and tended them there. They would girdle trees by stripping the bark in order to stop the spread of disease or thin out badly placed saplings. And they would encourage the companion plants they wanted and weed out the ones they didn't, so that in the end the whole forest would be productive while remaining an ecosystem and not a monoculture. It is still agriculture, but it is a form of agriculture that is so much gentler on the landscape that, as the OP says, the European settlers could not recognize what they were seeing. To them the natives must have seemed to magically live in abundance while they starved."

(The tumblr post also includes many more details about how Native peoples managed the land.)

While it's clear that modern life makes a total return to Native land management practices impractical, that doesn't mean we can't learn from indigenous wisdom. All of us will be impacted by an unhealthy planet, and it only makes sense to consult the historical experts on sustainable living to find solutions.

At the same time, we need to acknowledge that Native communities are disproportionally impacted by environmental issues. Oil pipelines are being built through Native lands. Indigenous people in the Pacific islands are having to navigate rising sea levels. Inuit communities are having to figure out how to move entire villages due to melting Arctic ice. Native environmental leaders not only have generational wisdom to offer, but an urgent need for all of us to take meaningful action.

RELATED: Laws and climate change are harming this tribe's foodways. Here's how they survive.

When prominent activists like Greta Thunberg tell the world to listen to indigenous leaders, we should share and heed that advice. We can learn about and support young indigenous activists on the front line of environmental issues. We can check out the initiatives of organizations like Indigenous Environmental Network and their allies like Climate Justice Alliance.

When we have a collective problem, we look to experts to help solve it. And when it comes to protecting the environment and maintaining a sustainable relationship with the earth, indigenous people are some of the most experienced experts we have.