A dead whale just washed ashore with 88 pounds of plastic waste in its stomach. This needs to stop. 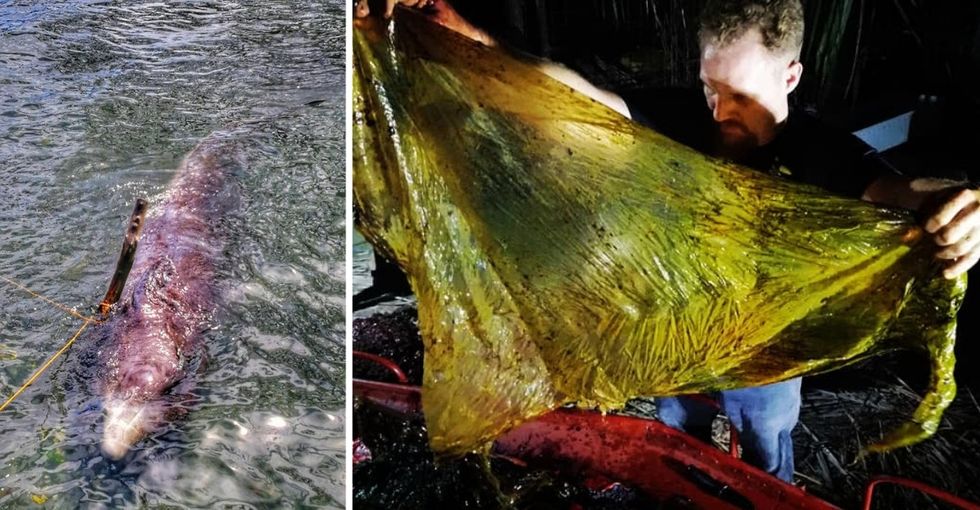 A whale has washed ashore in the Philippines, its stomach so full of plastic it died of starvation and dehydration.

The juvenile male curvier beaked whale was examined by scientists at the D'Bone Collector Museum, a non-governmental organization that specializes in animal preservation and education.

The museum shared the story and photos of what they found in the whale's stomach on Facebook, and it's devastating. 40 kilos (about 88 pounds) of plastic bags including rice sacks, banana bags, and "multiple shopping bags" were pulled from the whale's stomach. Scientists say that the copious amounts of plastic made it impossible for the whale's digestive system to function properly.

"This whale had the most plastic we have ever seen in a whale," the museum posted. "It's disgusting. Action must be taken by the government against those who continue to treat the waterways and ocean as dumpsters."

Most plastic pollution in the ocean comes from five Southeast Asian countries. But guess where the U.S. sends its plastic waste.

According to a 2017 report from the Ocean Conservancy, the five countries that contribute the most plastic ocean pollution are China, Indonesia, the Philippines, Thailand, and Vietnam.

"These countries have recently benefited from significant increases in GDP, reduced poverty, and improved quality of life," the report states. "However, increasing economic power has also generated exploding demand for consumer products that has not yet been met with a commensurate waste-management infrastructure."

The U.S. and other Western nations may take that to mean this whale's death and others are not really our problem, but that's far from the case. For more than two decades, we have been sending a significant portion of our plastic waste to China.

But since China placed a ban on plastic waste imports in 2018, we've been shipping more of our plastic to other developing nations in Southeast Asia, including Thailand and Vietnam. And according to Unearthed, the investigative arm of Greenpeace, we've been doing so without due regard for whether those countries have the environmental infrastructure to handle that waste responsibly.

In other words, some of the plastic they pulled out of that whale could very well be ours.

To stem this global crisis, we need to move away from plastics and stop thinking we can recycle everything.

Stories like this put the impact of our plastic dependence right in our faces, and leave many of us asking what we can do. Naturally, we need to push our governments to regulate industries that produce waste to make sure they are operating sustainably. But how can we make a difference individually?

The answer—at least at this point—isn't recycling. Those of us who grew up having the three R's (Reduce! Reuse! Recycle!) drilled into our heads may have fooled ourselves into believing that plastic was okay as long as we find a recycling bin to toss it into. But as we are learning, what we think is being recycled often isn't. Much of it is being shipped across the world to maybe be recycled or maybe end up being dumped into the ocean.

And of course, we still have far too much plastic that can't be recycled. Our reliance on convenience and our penchant for sterile packaging has created a demand that manufacturers continue to meet, Earth be damned. Until we change our consumption habits and demand differently with our dollars, we're going to continue to struggle with excess plastic waste, and keep watching majestic creatures die from bellies full of our bad choices.

Keep ReadingShow less
community
Get stories worth sharing delivered to your inbox
By signing up you agree to Upworthy's privacy policy.
Trending Stories
art
popular