For a decade, a man's last tweet was a joke about a girl. 10 years later, he shared a happy ending. 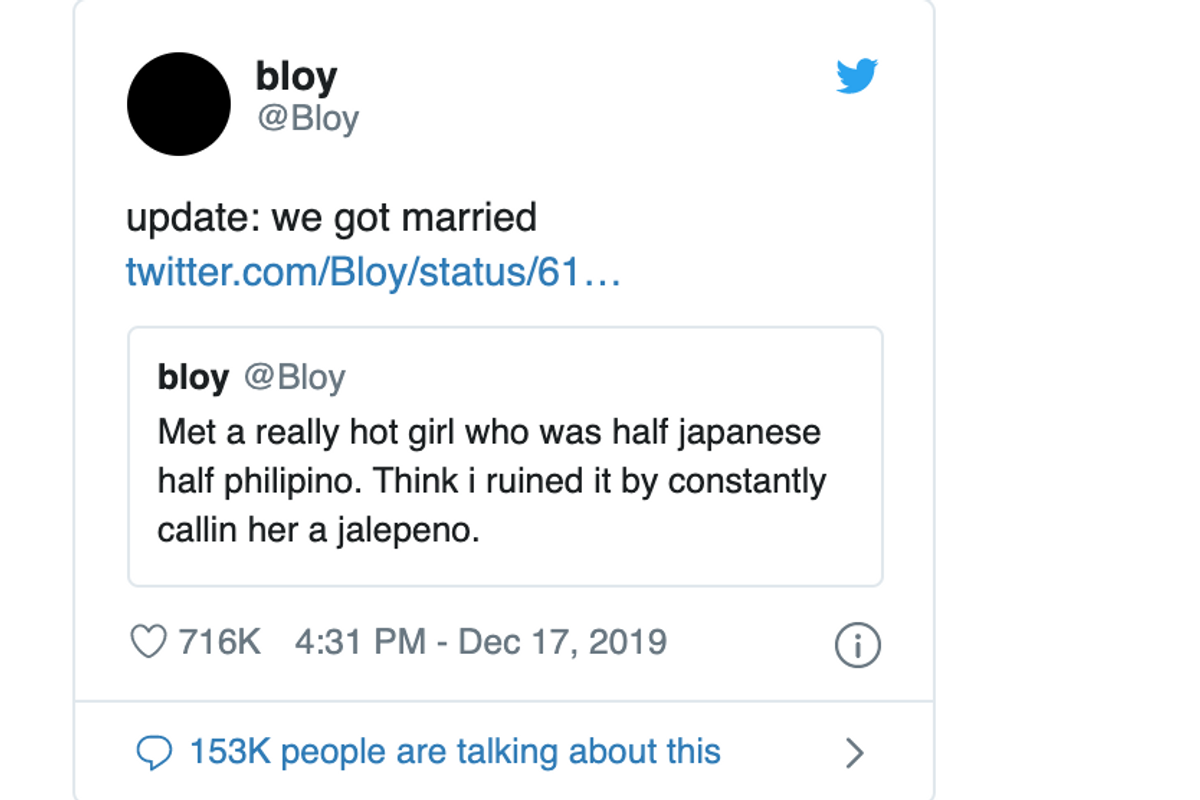 The decade is coming to a close, and people are sharing photos of how they've changed in the past ten years on Twitter. The challenge is going viral, but you don't always need a photo to remind yourself of how different your life is. Sometimes it can be something as simple as one tweet. For a decade, the Twitter account @bloy only had three tweets, all made in 2009. One saying he was joining the platform, one saying he was leaving the platform, and one pondering if he lost his chance with a "hot girl" he met at a bar in Las Vegas by making a dumb joke.

RELATED: Anyone with a slightly sick sense of humor will be enchanted by this twisted love story.

The account belonged to Jared Matthews. "I'm not going to lie to you, I was getting a little drunk, and when she told me she was half Japanese, half Filipino, I just made the joke," Matthews told BuzzFeed News.

It turns out, he didn't lose his chance with the girl after all. Analyn, the woman at the bar, thought the joke was funny, and the two exchanged phone numbers. They wound up dating. "I knew exchanging numbers that night had been the best decision of my life," Matthews told BuzzFeed News.

Ten years later, Matthews went back on Twitter. "I wanna skip the reasoning behind stepping away from Twitter, but the reason I came back was because I had seen how much it changed from then," he told BuzzFeed News.

Matthews saw his tweet about Analyn, and added a romantic update. Matthews proposed to Analyn three years after they started dating, and they're now married.

The original tweet didn't get any attention in 2009, but it went viral in 2019. It's a nice reminder that Twitter isn't just a place where people share outrage over current events. Sometimes, it's a place where we can witness some of the more human moments in the world.

The couple is surprised at the response. "I told [Analyn] about my new viral tweet and she said, while laughing, 'Don't you think the update is a little outdated?'" Matthews said.

Matthews also had a little advice for all of the hopeless romantics out there, encouraging others to take that leap of faith.

Matthews tweets also remind us just how long social media has been in our lives. But more than that, it's the moments that occur between the tweets that are what matters.