A Hollywood film about disability has a lot of people feeling left out.

Some spoilers for the book/film 'Me Before You' ahead. 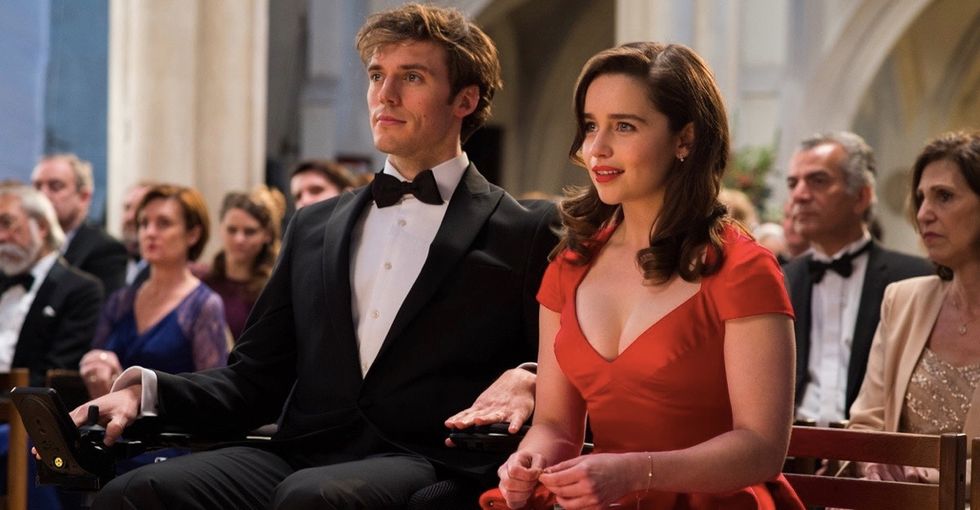 The trailer for the upcoming romance film "Me Before You" promises everything you expect from a good love story.

"Me Before You" stars Emilia Clarke ("Game of Thrones") and Sam Claflin ("The Hunger Games") and is an adaptation of the 2012 book of the same name. The trailer promises an epic love story between Will, a quadriplegic man (played by the able-bodied Claflin) and his caretaker Louisa (Clarke).

It has everything you expect from the genre — conventionally attractive people, hair that somehow doesn't look horrible in the rain, lots of crying, remarkably well-lit bedrooms, and so many feelings and grandiose declarations of love.

What the trailer dances around, however, is that much of the driving force of the film is Will's belief that he'd be better off dead than alive and paralyzed. His parents, desperate to save him, hire Louisa as a caretaker. Will agrees to wait six months before seeking an assisted suicide, and Louisa spends that time trying to encourage him to keep on living.

In the end (spoiler alert), Will chooses death over life as a quadriplegic, and Louisa is able to better appreciate and live her own life as a result of having known him.

According to many in the disabled community, the film pushes some harmful messages about people with disabilities and the kinds of lives they lead.

Disability rights blogger Kim Sauder addresses some of the issues at The Huffington Post, writing, "It’s a film about disability and assisted suicide which is troubling enough, but is made worse by the fact that it uses a non-disabled actor in the role of a quadriplegic."

It certainly doesn't help that Will's character was not born quadriplegic. His character was paralyzed as the result of a car accident and decides that life with a disability is not a life worth living. If Will were a real, living person, this is certainly Will's decision to make. But Will is not a real person. Will is a character whose story and decisions are controlled by a screenwriter and director, both of whom in this case are able-bodied.

Quadriplegic people are perfectly capable of leading rich, full lives. According to "Me Before You," however, living a life in paralysis is not a life worth living very long.

"The non-disabled media heavily over-represents disability discourses that fit into ableist stereotypes, which makes it harder for the viewer to differentiate between the feelings of individuals and the experiences and feelings of all disabled people," Sauder writes.

On May 23, Clafin was scheduled to do a live chat to promote the film. Twitter users flooded the hashtag, eager to make their voices heard.

For an hour, fans were going to have a chance to engage Claflin in real time using the hashtag #AskSam. People with disabilities — who were already frustrated with the painfully-ironic #LiveBoldly hashtag the film was promoting — used the opportunity to make themselves heard:

Unfortunately, the #AskSam Twitter chat was brought to an abrupt and early ending 20 minutes before it was slated to begin ... without Claflin answering a single question.

It's not clear whether this was Claflin's call or a decision made by a PR rep or just a terribly unfortunate accident. Whichever way, it reinforced the erasure of actual people with disabilities — which was exactly the problem in the first place.

Their questions unanswered, a group of activists hijacked the film's #LiveBoldly hashtag, using it to share their own stories.

"To paint a movie with such a tragic outcome as a love story and the choice of assisted suicide as rational … reinforces the stereotype that disabled people have such awful lives that death is preferable," actor/writer Mik Scarlet told Upworthy. "My life turned out to be more amazingly wonderful than any of my non-disabled friends might have dreamed of, let alone a paralyzed wheelchair user. Where is that story?"

As it turns out, there are a lot stories just like it — and plenty of people with disabilities willing to share their stories with anyone open to listening:

Including people who are part of the community whose story is being told can only serve to make the story stronger.

Whether that means making sure they're consulting on the script, on set, or — better yet — getting opportunities to tell their own stories on screen or casting an actual quadriplegic to star in the film, taking steps to make sure the story respects the lived experiences of the people who will be affected by the way characters like them are represented is a good thing.

"The media needs to find a way to talk about disability in a way that does not make disabled people look like they are burdens," said activist and filmmaker Dominick Evans. "My disability requires a similar level of care to the protagonist in this film, so it's hard to see a movie where my life, essentially, is devalued on-screen."

Nobody's perfect, and Hollywood will certainly make similar mistakes and tell similar stories again. Hopefully, the backlash to "Me Before You" will inspire other authors and filmmakers to take a different approach when telling the stories of people with disabilities in the future.