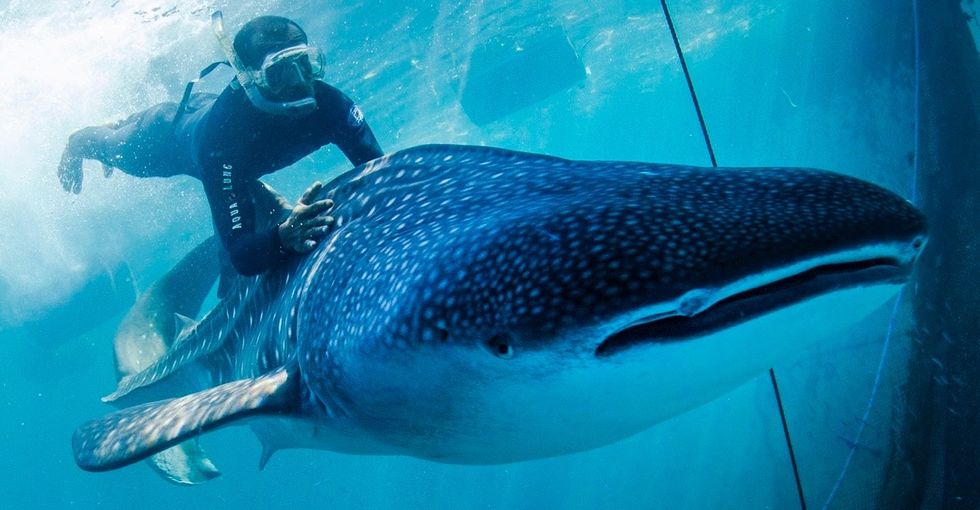 The Indonesian government just busted a high-level criminal ring in a story that reads like some sort of awesome Hollywood spy thriller.

It began with a tip-off that something was amiss back in late 2014; the cast was an international coalition of crime-busters; the plot follows an 18-month investigation; and it ended with an epic conclusion: a bust and the recovery of stolen goods.

What stolen goods were being recovered, exactly? It wasn't famous paintings, diamonds, sunken treasure, or even a certain golden falcon statue.

The two whale sharks were being kept in a pen when the Indonesian agencies found them. All photos by Paul Hilton/Wildlife Conservation Society.

On May 27, 2016, Indonesia's Ministry of Marine Affairs and Fisheries, with support from the Wildlife Conservation Society's Wildlife Crimes Unit, busted up an operation that had captured the two marine leviathans.

The captured sharks had been destined for the illegal wildlife trade.

One of the whale sharks in a darkened holding pen.

A company known as PT. Air Biru Maluku captured the sharks off the coast of Indonesia. It had previously received government permission to collect and breed ornamental fish.

But whale sharks are not ornamental fish. They are 40-foot-long megafauna. And PT. Air Biru Maluku had no permission to do anything with those.

The company's plans to sell the gigantic fish was nothing short of illegal.

The illegal wildlife trade is a multibillion-dollar industry that turns wild plants and animals into souvenirs, status symbols, pets, and medicine.

Rhinos, elephants, and tigers are some of the most famous victims of the illegal wildlife trade, killed for their horns, ivory, and pelts. But thousands of different wildlife species are threatened by the illegal trade, including whale sharks.

Whale sharks can be kept in large aquariums successfully and responsibly; there are places in the United States accredited by the Association of Zoos & Aquariums that whale sharks call home. But given the criminal nature of this particular operation, these sharks were probably not destined for anywhere quite so nice.

The whale shark is the largest fish in the world, listed as a vulnerable species by the IUCN, and a protected species in Indonesia.

One of the captured whale sharks swims in its pen while authorities confront the suspects.

These aquatic behemoths can weigh more than 20 tons. Imagine a giant fish the size and weight of a yellow school bus swimming through the ocean and you'll get a good idea of what getting up close and personal with one would be like.

In fact, swimmers can often approach the giant fish. Though whale sharks are big and have "shark" in their name, their temperament is more like the "whale" part — they're pretty docile. Like their mammalian rivals for the heavyweight title, baleen whales, whale sharks only eat the tiny floating plants and animals known as plankton.

The good news: Thanks to the heroics of the rescue crew, the two captive whale sharks have been returned to the wild.

Divers escorted the giant fish back into the ocean unharmed. We still don't know a lot about the whale shark's life cycle, but it's thought that they might live more than a century, meaning these two may have a long lives ahead of them back in the ocean.

A diver escorting the sharks back into the ocean.

As for the criminals, as of May 27, nobody had been arrested ... yet. But anyone found guilty could face up to six years in prison and over $100,000 in fines.

Thanks to agencies like the Wildlife Conservation Society and governments like Indonesia's, we can help give these magnificent animals a good home and keep them out of criminal hands.