A cartoon rap flips the script on what it means to 'do well' in school.

We can fix this. 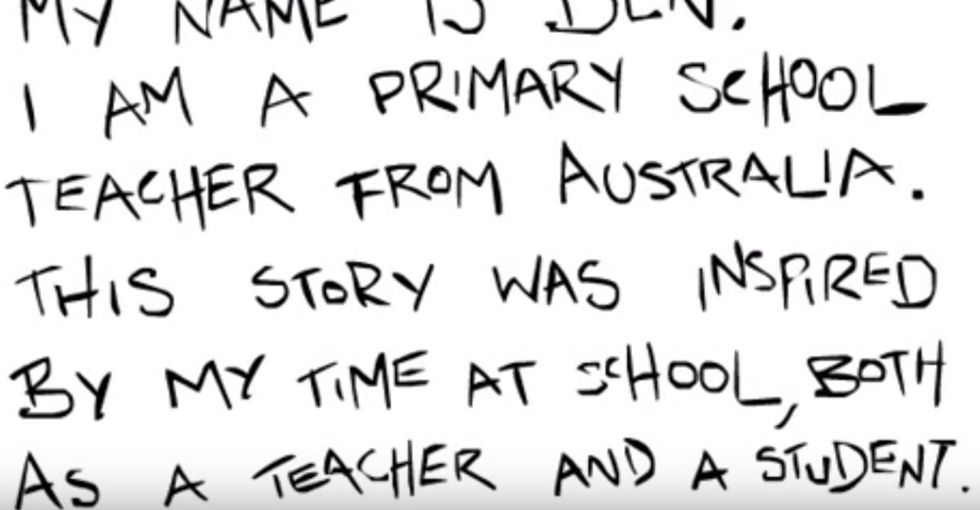 Ben Knight taught school in Australia, and he couldn't help but notice something a little bit backward.

So he made some art about it...

...to illustrate — literally — a huge problem he saw.

That problem? The most radical, creative "out-there" square pegs of kids were being forced into round holes in the name of "doing well" in school.

All GIFs via Ben Knight.

The rap he wrote is called "Little Jimmy." In the creative rap and cartoon, Little Jimmy gets shut down by his teachers when he has a "different" and more creative approach to learning.

It's not wrong. He still writes his name.

Some teachers do take a positivity approach to teaching and try very hard to avoid ever telling kids they're "wrong" and instead say, "That's great! Now let's try it the way I asked." And those educators should be rewarded royally. I had some teachers like that!

But Little Jimmy was not so lucky. To do well, he had to ignore his natural gifts and conform. As the creator of this rap recites,

"Year by year, teacher by teacher, Jimmy's love of art, his most distinctive feature, was beaten out ... or whatever better word. He put his colors down and knuckled down with his work. "

The story explains that Jimmy got better in school. But in order to do that, he had to trade out his creativity.

To "do well" in academics, "he just had to lower his artistic anima."

Until finally one day at work as an adult, he sees a problem that he just can't solve and he remembers something.

He remembers that spark of creativity.

No one's going to deny that doing well in school is important. But our idea of "good" might be on the way out.

Using logic is good. Using out-there creativity is also good. Using them together? Who knows what could happen if we truly valued both?

If we make school a place for all minds to truly thrive, all might do better. We might move even further forward.