A bit of bisexual mythbusting inspired by Halsey. 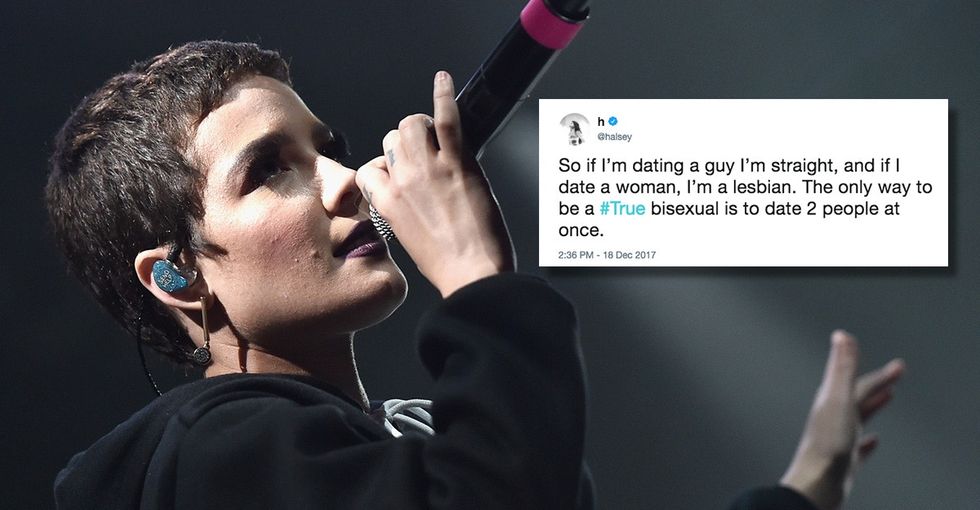 People seem to have a lot of misconceptions about what it means to be bisexual. Thankfully, pop star Halsey is here to clear things up.

On Twitter, the "Bad at Love" singer joked, "So if I'm dating a guy, I'm straight, and if I date a woman, I'm a lesbian. The only way to be a #True bisexual is to date two people at once."

Fellow bi icon ("bi-con?"), actor Evan Rachel Wood, jumped in with another joke rolling her eyes at some of the totally frustrating misconceptions people have about bisexuals.

@halsey To eveyone except your partners. Then you are too gay or too straight. And when you have 2 partners people… https://t.co/7SIHgYa3Zm
— #EvanRachelWould (@#EvanRachelWould)1513637657.0

Since there seems to be a bit of confusion about the B in LGBTQ, let's break down seven other majorly common myths people have on the topic.

1. "There's no such thing as bisexuality."

This is silly. In fact, a 2011 study by the Williams Institute found there are actually more bisexual people than there are gay and lesbian individuals combined. If you believe gay and lesbian people exist (which, yeah, of course they do), there's really no reason to doubt the existence of the bi folks of the world.

2. "Bisexuals have it easy compared with gay men and lesbian women."

It's easy to understand where this line of thinking comes from. In theory, bisexual people can just "blend in" as straight if and when it's convenient for them. The truth is a lot more complicated than that. A 2011 Centers for Disease Control report of high school students found that bisexual individuals are more likely to be victims of intimate partner violence (23% of bi people surveyed) than their gay and lesbian counterparts (20% of those surveyed). Much like other members of the LGBTQ community, bi individuals experience high levels of discrimination in  health care, employment, and housing.

Halsey performs at Coachella in 2016. Photo by Frazer Harrison/Getty Images for Coachella.

3. "Bisexuals are just gay or lesbian but don't want to admit it."

This line is pretty easily debunked by looking at a 2013 Pew Research Center report that found that out of self-identified bisexual individuals in committed relationships, 84% were paired with someone of the opposite sex and just 9% were in a same-sex relationship. Some might conclude from this data that bisexuals are actually straight and not bi at all, but that's also flawed. What's likely is that bi individuals tend to be in opposite-sex relationships simply because the dating pool is larger.

4. "Bisexuals are more likely to cheat in monogamous relationships."

The bi-person-as-greedy-sex-fiend myth goes way back, but there's never been any firm data to support that nor is there much in the way of supporting this idea that bisexuals are anti-monogamy as a whole.

This isn't necessarily true. While some people prefer the term "pansexual" as a way of describing attraction to people of all genders, plenty of bisexual people are perfectly accepting of trans people. The idea behind this is that since the word "bisexual" has "bi" in it, that it's an attraction to two options: men and women. There's another way of looking at it, however. Here's how the American Institute of Bisexuality defines the term (emphasis added):

"Bisexuality describes anyone whose attractions are not limited to one sex. The term comes to us from the world of science and describes a person with both homosexual (lit. same sex) and heterosexual (lit. different sex) attractions."

6. "You're not bisexual unless you're equally attracted to men and women."

While it's true that some bi people are equally attracted to men and women (and, taking a cue from point #5, non-binary people), it's not true for all. It's not always a 50-50 split; some might lean 90-10 toward men or 75-25 toward women, and for some people, it might be a constantly changing and shifting ratio. If you're attracted to people of the same and different genders as you, the bisexual label is yours to claim (if you want it).

7. "You're not bisexual unless you've dated men and women."

The truth is that you don't need to have dated or been physically intimate with anyone. Most straight people know they're straight before they're ever in a straight relationship; certainly, there are gay people who know they're gay before they've ever been intimate with someone else; so why would it be any different for bi folks? Your identity is yours alone, and anyone who tries to tell you otherwise can take a hike.

Hopefully, the ever-increasing visibility of bi people in the public spotlight will lead to a drop in some of these misconceptions and harmful stereotypes. It's been great seeing shows like "Crazy Ex-Girlfriend" and "Brooklyn 99" include some myth-busting and accurate depictions of bi characters, but there's certainly a long way to go before "So, like, are you really just gay?" questions become a thing of the past.

One day, the myths will all be busted. Until then, Evan Rachel Wood, Halsey, and the rest of us bi folks will have to commiserate over a few snarky tweets.