8 of the most fascinating places on Earth you'll probably never see in person.

There are plenty of beautiful and accessible places where you can go interact with our natural world. These aren't them. 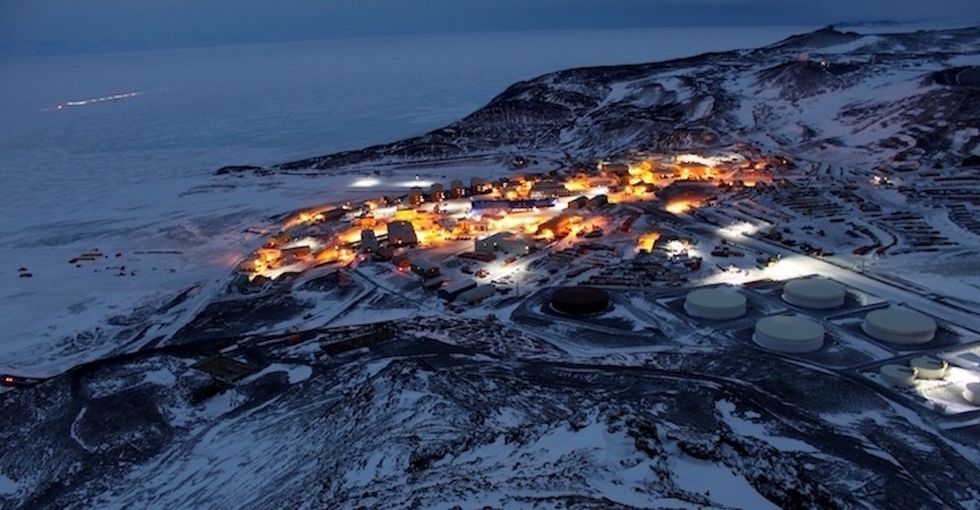 Technology is making our planet — all 197 million square miles of it — feel smaller every day. We can use digital underwater maps to explore the Great Barrier Reef, drones to fly over pods of Belugas in the Arctic, and high-resolution satellite footage to explore almost every spot on Earth.

It can be hard to imagine there are still places on Earth where most human feet have never stepped, remote wild worlds we've never seen with our own eyes. But they do exist, and they're pretty darn magical. Here are just a few.

Aside from scientists, not a lot of mammals make their home in Antarctica. There are plenty of reasons for this.

First, it’s located at the South Pole in the middle of a world park where no country is allowed to claim ownership, build settlements, or extract resources. Second, it can get extremely cold. Like, -58 degrees Fahrenheit (-50 degrees Celsius) cold. That's right. 58 degrees BELOW ZERO.

Because sometimes even penguins can't even.

McMurdo Station is accessible via an airstrip in the summertime, and about 1,000 personnel from around the world work and live there. Before winter sets in, almost all of them will leave. At the Amundsen-Scott South Pole Station, one resident very famously had to self-administer chemotherapy drugs to herself after she discovered she had breast cancer since there was no other doctor on site all winter.

2. Fewer than 10 people on Earth know where to find the world’s oldest tree.

For hundreds of years, a solitary Acacia tree named Ténéré grew in the middle of the Sahara desert. It was the most isolated tree in the world, with roots stretching 118 feet below the surface. That is, until 1973, when a drunk truck driver plowed into it and killed it.

Any of these trees could be the oldest in the world. Image via Dcrjsr/Wikimedia Commons.

That sad story — coupled with the human tendency to want to touch and take selfies with everything cool — means it's not surprising that biologists have decided to keep the location of the world’s oldest remaining tree a closely-guarded secret.

Here’s what we do know: Methuselah is a bristlecone pine tree located somewhere in California’s White Mountains. Scientists have dated it at about 5,000 years, meaning it started growing before the ancient Egyptians built the pyramids. Another tree, Prometheus, was discovered in 1964 and may have been even older than Methuselah. Except that was only discovered after a scientist cut it down.

Humans: We can’t be trusted with anything.

3. Only three people have ever been inside the Mariana Trench, and one of them is James Cameron, because of course it is.

Some hipsters would have you believe the deepest place on Earth is the second-to-last page of a David Foster Wallace novel, but they’d be wrong.

Welcome to Challenger Deep, site of your next nightmare. Image via Wikimedia Commons.

That honor really belongs to Challenger Deep, a crevasse inside the Mariana Trench. This underwater trough 1,500 miles long and about 40 miles wide is located in the deep Pacific ocean at a point east of the Philippines and south of Japan near the island of Guam. And when we say "deep," we really mean it. Challenger Deep is nearly seven miles underwater. As National Geographic pointed out: "If Mount Everest were dropped into the Marianas Trench, its peak would still be more than a mile underwater."

Only three people have been inside Challenger Deep: Navy Lt. Dan Walsh and Jacques Piccard descended into it in 1960, and director James Cameron traveled there in 2012. If you want to repeat their feat, good luck. There’s no natural light inside the depths of the Mariana Trench, the water temperature is barely above freezing, and the water pressure is about 8 tons per square inch, or about 1,000 times what we experience at sea level.

Tristan da Cunha is the most remote place on the planet where people still live. Not a lot of people, mind you. The current population is about 270 people, and most of those are descendants of the original families who settled there in the 1800s.

Tristan da Cunha is a tiny archipelago of islands in the south Atlantic with South Africa about 1,700 miles away and South America about 2,000 miles away. It’s so remote that some people think it inspired the mysterious island in "Lost."

There are no smoke monsters on Tristan da Cunha ... that we know of. GIF via "Lost."

Tristan da Cunha was discovered in the 1500s and annexed by the British in the 1800s as a means of keeping an eye on Napoleon (who was exiled to the nearby island of St. Helena). If you want to go there today, it is only accessible by boat.

5. Before 2010, the only way into Mêdog County was over a suspension bridge.

Mêdog County is one of China’s wild natural treasures. Located in the mountains of the Tibet Autonomous Region (occupied Tibet adjacent to Mainland China), it is home to dozens of rare animals and thousands native plants.

It’s also China’s least populated county. Of the 1.35 billion people living in China, only 12,000 people make their home in Mêdog County, mostly working as farmers. Part of that comes from Mêdog’s remoteness. For decades, the Chinese government tried and failed to build a reliable road into the county. Their efforts were thwarted by mudslides, avalanches, and extreme winter weather. Until five years ago, the only way into Mêdog County was through an overland mountain path and across a 650-foot suspension bridge. An all-weather road was completed in 2013. And "all-weather" means "passable by all-terrain vehicle for nine months of the year." Unless you're a yeti, in which case, you do you.

If you can’t imagine a day without your down-filled parka, then the Svalbard islands are your 24,000-square-mile Arctic paradise. Located above the Arctic Circle, this Norwegian territory doesn’t experience days and nights like the world at lower latitudes. Instead it will go through months of complete darkness followed by months of endless daylight.

If your circadian rhythms can handle it, you can visit Svalbard by catching one of the daily flights from Oslo and then join the 2,700 residents in the town of Longyearbyen for a plate of kjøttboller and a glass of akevitt.

The Global Seed Vault is built into the side of a frozen mountain. Image via Martyn Smith/Flickr.

Or check out the Global Seed Vault, an underground bunker storing most of the world’s plant and food seeds in case of an extinction-level catastrophe. Svalbard was chosen as the location due to its remoteness and its protective layer of permafrost. More than 720,000 seeds are kept in the Global Seed Vault from more than 4,000 plant species.

7. SGang Gwaay is visited so rarely, iStock doesn’t have photos of it.

SGang Gwaay is a tiny island tucked into the southwest corner of the lower part of Moresby Island in Haida Gwaii, Canada. Occupied by the Indigenous Haida people until the late 1880s, it is of great cultural significance to the Haida and was recognized as a UNESCO world heritage site in 1991.

The village of SG̱ang Gwaay Llnagaay (Nan Sdins or, formerly, Ninstints) was the primary settlement on the tiny island. Its beaches are dotted with cedar mortuary poles and totems along with the remains of several longhouses.

Orcas are often spotted off the coast of Haida Gwaii.

Getting to SGang Gwaay includes a short plane ride from Vancouver or a two-day drive from Vancouver to Prince Rupert, plus a six-hour ferry ride to Haida Gwaii. Once there, travelers must purchase a permit to enter Gwaii Hanaas National Marine Park by sea kayak or boat then take a short course on responsible tourism. After that, it’s just a few lovely days' journey to reach this remote and magical place.

Mountain climbers of the world rejoice: There are still peaks to conquer, and Gangkhar Puensum is one of them. Located in the tiny Himalayan nation of Bhutan at its border with China, Gangkhar Puensum reaches 24,836 feet (by comparison, Mount Everest is 29,029 feet). Perpetually cloaked in snow, its name in Bhutanese means "white peak of the three spiritual brothers."

Four separate expeditions in 1985 and 1986 failed to reach the summit. No one has tried since.

Sadly, if climbing Gangkhar Puensum is your dream, it must remain unfulfilled. The Bhutan government has prohibited mountain climbing (at heights greater than 6,000 meters since 1994 and then altogether in 2003) out of respect for the spirits and gods that locals believe dwell in and around the mountains. It is an aggressive move, but one the government believes is necessary to protect the Bhutanese society, religion, and environment from external forces.

In the meantime, the view in photos alone is pretty darn spectacular.

How many had you heard of? Think your friends will have heard of more?