Malala Yousafzai is an ordinary girl with extraordinary bravery. 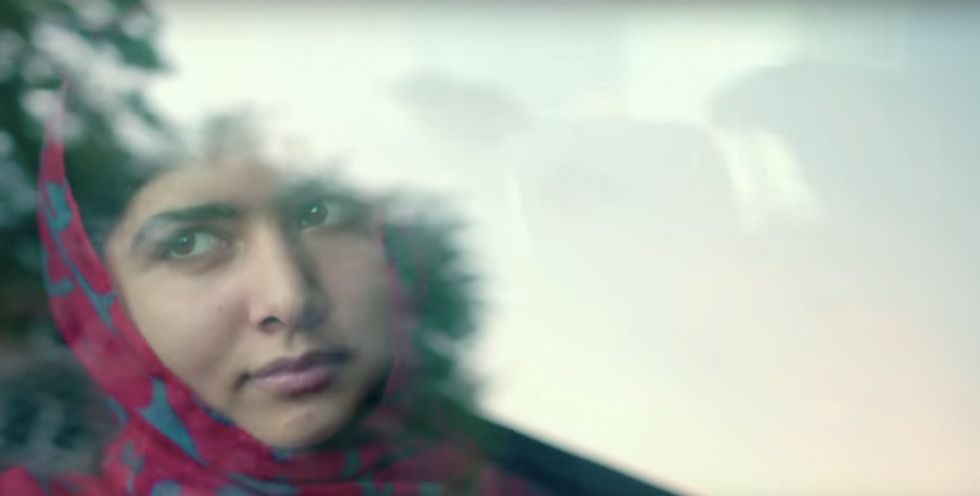 If you didn't know any better, you might mistake Malala Yousafzai for a normal teenager.

She can't keep the grin off her face when Googling photos of Roger Federer — giggling when saying she likes his haircut — and she has strong opinions about both pizza and Bella from "Twilight." She patiently teaches her digitally-challenged dad how to use "the Twitter," but gets under his skin when she's late for breakfast, too.

"Come, Malala, come!" he yells from the kitchen. "What's the problem?"

In fact, if you aren't aware of Malala's backstory before watching the new documentary, "He Named Me Malala," which is all about her amazing life, I'd guess you'd even mistake her for an everyday 18-year-old — not a human rights leader championing her cause on the world stage.

In case you don't know much about the girl who stood up against the Taliban (and won), here's a quick explainer.

Malala was shot in the head by a member of the Taliban in 2012 while riding a bus to school in Pakistan's Swat Valley. Why? Because she was a girl who was outspoken about why she, and girls like her, deserved access to education. It's really that simple.

Remarkably, she survived the attack. And now, she's become an even bigger nightmare for the religious extremists, having created the Malala Fund — an organization that advocates for girls' education around the world — and continuing to draw global attention to her cause. (Reminder: She's 18.)

While the film explores several aspects of her life, I thought the most compelling takeaway was how Malala could be both so seemingly ordinary, yet say and do such extraordinary things.

Here are eight quotes from the movie "He Named Me Malala" that prove just how much of an iconic, heroic badass she is.

1. The Taliban can try, but they won't silence her.

If actual bullets couldn't stop her, can you expect scare tactics to? Despite the Taliban's threats to kill Malala one day (her family moved to the U.K. to help protect her in the shooting's aftermath), one consistent theme throughout the film is Malala's fearlessness in promoting children's access to education. The Taliban can say and do whatever they want — they won't silence her.

2. She's on the Yousafzai family tree. And that's a big deal.

"No woman was mentioned. Only men were there. I took the pen, [drew] a line, and [wrote] 'Malala.'" — Ziauddin Yousafzai, on including Malala's name on the family tree

Malala's father, Ziauddin, was an educator and vocal advocate for women's rights in his native country long before Malala was shot in 2012. In the film, he explains how he wrote Malala's name on the family tree, which dates back about 300 years. No other woman's name was included before that — a symbolic reflection of how women are valued in many regions of the world.

3. She refuses to let anger get the best of her.

If you're a member of the Taliban, your ego must be hurting by this point. Because Malala not only doesn't fear you, she doesn't care enough to be angry with you either.

When asked by an interviewer in the film if she's ever been upset with the Taliban for their attempt to killer her, she responded "no" without hesitation and explained that her Muslim faith has taught her "humanity, equality, [and] forgivingness."

It becomes evident in the film that Malala's mother, Toorpekai Yousafzai, has more traditional Islamic values when it comes to gender than her daughter does. But it hasn't stopped Malala from questioning why one gender should be treated as if they're less than the other.

Although it's easy to praise Malala's progressiveness and frown upon Toorpekai's old school ways, it's also worth noting that Toorpekai has been loving and supportive of her daughter's mission to promote girls' education. She even made the commitment to learn how to read and write herself as an adult.

5. She hangs around with A-listers ... but still has to study.

"Some people think, 'Malala is lucky — she's now with Hillary Clinton, she's with Bono, she's with rock stars.' But on the other side, I get homework as well." — Malala

The fact Malala has remained committed to her own schoolwork (did you see her GCSE test scores?!) even while palling around with world leaders proves she clearly walks the walk when it comes to learning.

6. She refuses to give up — especially when times get tough.

"It is so hard to get things done in this world. You try and too often it doesn't work. But you have to continue. And you never give up." — Malala

One of Malala's more sobering remarks came amid the film's coverage of Boko Haram's kidnapping of Nigerian school girls and the children refugee crisis in Syria — two world events Malala helped shine a light on.

But, despite the overwhelmingly tragic circumstances, she's committed to fighting for justice. The cameras follow her to West Africa, where she meets with the Nigerian president to pressure him into prioritizing the kidnapped girls' protection, and she travels to the Syrian-Jordan border, where she aids refugees to safety.

7. She has great admiration for her father.

"One thing that I notice in my father — even if he stammers for one minute, he will try to say that word. He never stops. If you have a stammer, you can just stop it, and you can say another word instead. But my father never does that." — Malala

The special bond between Malala and her father is clear throughout the entire film. When questioned about his stammer — which hasn't prevented him from giving speeches publicly — Malala explains how his refusal to let his speech affect his activism has been a source of inspiration to her.

8. Not everyone loves her name. But she does.

"When I was little, many people would say, 'Change Malala's name. It's a bad name. It means sad.' But my father would always say, 'No, it has another meaning — bravery.'" — Malala

Malala is named after Malalai of Maiwand — a 19th century Anglo-Afghan war hero who inspired Afghan troops during a battle against the British. To some, the name conjures negative connotations. But Ziauddin Yousafzai always had a different take on the name, and it couldn't be a more accurate description of his heroic daughter.

Are you inspired by Malala? Here's how you can support her work.

Stand #WithMalala by spreading her message on social media using the hashtag, and learn more about how you can promote education in Kenya, Nigeria, Pakistan, and beyond on the The Malala Fund's website.

"He Named Me Malala" is now playing in theaters nationwide. Check out the film's trailer below.