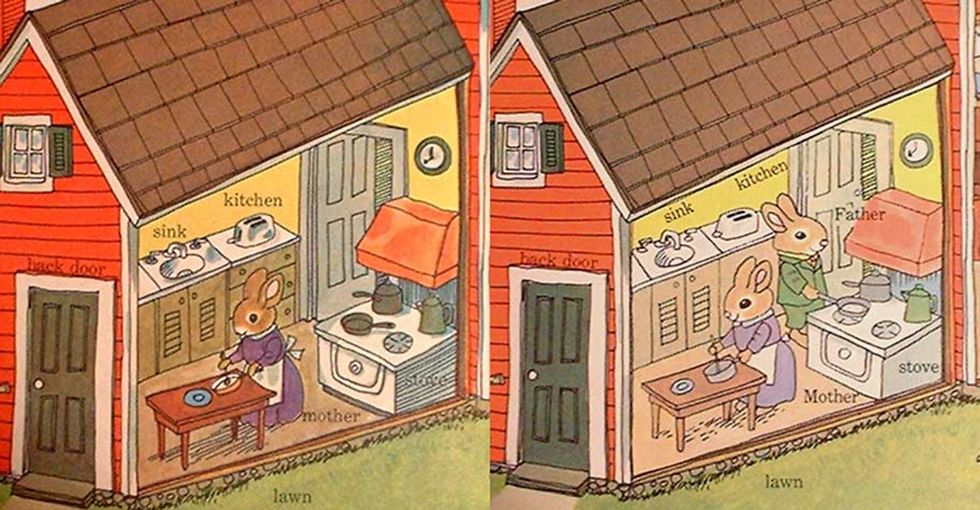 Scarry started publishing books in the 1950s, when times were, well, a little different. So some of the details were quietly updated.

Alan Taylor, a senior editor for the photo section of The Atlantic, noticed differences back in 2005 and decided to photograph them. From his Flickr album:

"The 1963 edition is my own, bought for me in the late 60's when I was a toddler, and read to tatters. The 1991 edition belongs to my kids today. I was so familiar with the older one that I immediately started noticing a few differences, and so have catalogued 14 of the more interesting differences here in this collection."

Taylor found 14 pages with differences between the original and updated versions.

Here are eight changes that reflect some of the progress society has made:

1. First up: The cover got a makeover. It might seem subtle at first glance, but look closely.

The original has a woman (bunny) in the kitchen, while the updated cover has both a man and a woman (still bunnies) in the kitchen. Also: The "policeman" bear changed to a woman, and the label changed to "police officer." The word "mailman" became "letter carrier," and a female farmer was added. Oh, and we went from a cat-mom pushing the stroller to cat-dad! Progress!

(The bunny brushing its teeth in the house was changed from a boy to a girl, but I'm not gonna read into that because hopefully all bunny-kids brush their teeth, right? I mean, for the sake of their little bunny teefs!)

2. Men can be flight attendants and women can be pilots. And, you know, they don't have to be hot.

While the gender of each role remained the same in the newer version (which is, unfortunately, pretty legit, given the glaring lack of female pilots in real life), the stereotyping was eliminated by making the "handsome pilot" more of an everyday "pilot" (raccoon?) and by turning the "pretty stewardess" into a regular flight attendant.

Shhhh: Don't tell the Starbucks Christmas cup haters this, but there are a lot more winter holidays than just Christmas. The newer version of the book included a menorah in the blank space to recognize those who celebrate Hanukkah.

4. Mommy Bears are no longer expected to have breakfast prepared for Daddy Bears...

...and the subtle change from "called to breakfast" to "goes to the kitchen to eat his breakfast" reflects that.

(Side note: Do Daddy Bears realllllly want to be treated like Kid Bears by being called to a meal, where they must promptly appear? I'm thinking not.)

And Richard Scarry's book was updated to reflect the late-20th-century realization that everyone belongs in the kitchen!

The updated version recognized that fact by changing "policeman" to "police officer" and "fireman" to "fire fighter." The ever-important job of cowboy was eliminated ( sigh ... how many career hopes and dreams were squashed?), replaced with a gardener and a scientist, both of which are filled by female characters. Three cheers for women in STEM! Also: The milkman was replaced by a taxi driver, but I'm pretty sure that was had to do with the fact that milkman (or woman) isn't a growing occupation any longer.

The newer version did away with the "beautiful screaming lady" (sigh... how many career hopes and dreams ... oh, wait — none) and replaced her with a regular "cat in danger." The "jumping gentleman" label was removed altogether, and the "fireman" became a "fire fighter" again.

8. "I" is for "ice cream" — and not stereotypical depictions of Native Americans.

We're still waiting for our football teams to get with the times, but the folks behind the Richard Scarry book update eliminated the "Indian" character that was wearing stereotypical clothing.

Yay, progress! And before you shrug and say "It's just a book," listen to this:

Florida State University recently led "the most comprehensive study of 20th century children's books ever undertaken in the United States." As you can surely guess, they found a gender bias toward male lead characters, even in books about animals — books like those by Richard Scarry.

Janice McCabe, the assistant professor of sociology who led the study, wrote:

"The widespread pattern of underrepresentation of females that we find supports the belief that female characters are less important and interesting than male characters. This may contribute to a sense of unimportance among girls and privilege among boys. The gender inequalities we found may be particularly powerful because they are reinforced by patterns of male-dominated characters in many other aspects of children's media, including cartoons, G-rated films, video games and even coloring books."

It's kind of cool to think these changes were made at least two and a half decades ago! That's something.

And we need changes to keep happening! Kids should be able to read books with same-sex couples and characters who have disabilities, for example, because those are everyday occurrences and books are a great intro to the world for kids.

Anyone else up for modernizing other classic kids' books so we can feel good about sharing them with our kids?

Tea time: how this boutique blends cultures from around the world

The Tea Collection combines philanthropic efforts with a deep rooted sense of multiculturalism into each of their designs so that kids can grow up with global sensibilities. They make clothes built to last with practicality and adventure in mind. But why "Tea"?

Let's spill it. Tea is a drink shared around the world with people from all different cultures. It is a common thread that weaves the world together. The Tea Collection was born from a love of travel and a love of sharing tea with different people in different places. Inspired by patterns from around the world, these clothes help children develop a familiarity with global communities.

Tea sources their materials ethically and ensures that each of their partners abide to strict codes of conduct. They have a zero-tolerance policy for anything "even slightly questionable" and make sure that they regularly visit their manufacturing partners to ensure that they're supporting positive working conditions.

Since 2003, The Tea Collection has partnered with the Global Fund for Children and has invested in different grassroots organizations that create community empowered programs to uplift kids in need. They donate 10% of their proceeds and have already contributed over $500,000 to different organizations such as: The Homeless Prenatal Program (San Francisco, CA, USA), Door of Faith Orphanage (Baja California, Mexico), Little Sisters Fund (Nepal) and others in Peru, Sri Lanka, India, Italy and Haiti.

But the best part about the Tea Collection? They're also an official member of the Kidizen Rewear Collective, which believes that clothes should stretch far beyond one child's use. They have their own external site for their preloved clothes that makes rewearing affordable. Families can trade in gently used Tea clothes and receive discounts for future products. Shopping the site helps keep clothes out of land fills and reduces the environmental impact of the fashion industry.

By creating heirloom style clothing made to last families can buy, sell, and trade clothes that can be reworn again and again. Because "new to you" doesn't always have to mean never been worn. And let's be honest, we all know how fast kids grow! Shopping preloved clothes is a great way to keep styles fresh without harming the environment or feeling guilty about not getting the most out of certain styles.

But don't just take our word for it! Head over to the Tea Collection and see for yourself!

Upworthy has earned revenue through a partnership and/or may earn a portion of sales revenue from purchases made through links on our site.