17 times Carrie Fisher handled the world with eloquence and bluntness. 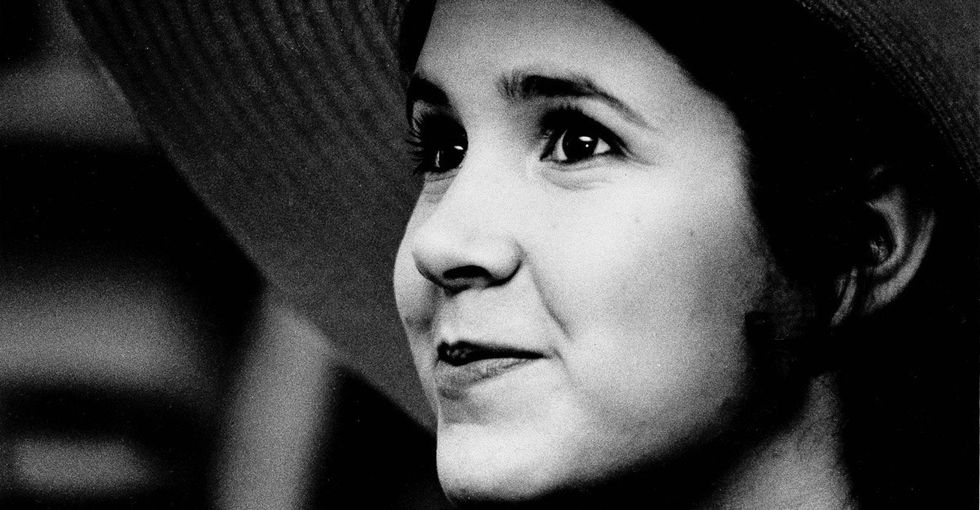 Fisher was rushed to the hospital on Dec. 23, 2016, after a cardiac episode on a flight. A family spokesperson confirmed her passing just four days later, on Tuesday, Dec. 27.

As we mourn her loss, we should also remember her for the one thing she was above all: an icon of resilience who inspired the world in more ways than most of us could ever aspire to.

It wasn't just any one role of hers that touched our lives — it was the sum total of her whole glorious existence, with all its ups and downs.

1. Fisher was born to celebrity parents who divorced after her father's very-public affair when she was barely three years old.

Singers Debbie Reynolds and Eddie Fisher were married in 1955, with the birth of Carrie Frances to follow on Oct. 21, 1956. Then Eddie Fisher hooked up with Elizabeth Taylor in just one of his many highly-publicized sexual exploits. Divorce is never fun for the kids, but even less so when it's all over the tabloids.

2. She was raised in the spotlight and dropped out of both high school and college for her acting career. But still, she never stopped pursuing an education.

She attended the Central School of Speech and Drama in London for a time, followed by Sarah Lawrence College, although she didn't complete either curriculum. Her interest in, and commitment to, literature and the arts never wavered, however, and she certainly kept on learning throughout her life.

3. No one thought that "Star Wars" would explode the way it did. Still, Fisher refused to let her acting career ride on its coattails.

Perhaps her most famous appearance was in "When Harry Met Sally," although she did make countless other cameos over the decades and was also one of the only actresses to appear on screen with both John and Jim Belushi. She even found several roles on Broadway.

4. Of course, it wasn't easy to be followed through life by that golden bikini, among other things. But eventually, she learned how to put that in its place.

As objectifying as that iconic outfit may have been, Fisher says she also found some pleasure in it. "I had a lot of fun killing Jabba the Hutt," she told The Guardian once. "The only reason to go into acting is if you can kill a giant monster."

Later, in response to a non-controversy about parents who thought the costume was too scandalous, she told the Wall Street Journal: "The father who flipped out about it, 'What am I going to tell my kid about why she’s in that outfit?' Tell them that a giant slug captured me and forced me to wear that stupid outfit, and then I killed him because I didn’t like it. And then I took it off. Backstage."

Photo by Araya Diaz/Getty Images for The Midnight Mission.

5. Fisher did a lot of drugs. Then she sobered up, and relapsed, and sobered up again. But most importantly, she talked about it.

She openly admitted to doing cocaine on the set of "Empire Strikes Back."

"I didn’t even like coke that much, it was just a case of getting on whatever train I needed to take to get high," she told the Associated Press. But she slowly realized that getting high was no longer her own choice but a necessary compulsion, and that was a problem.

6. She even survived an overdose, which is more than can be said for some of her friends.

Fisher had been clean for three months when she accidentally overdosed on sleeping pills. Luckily, her friends rushed her to the hospital and saved her life. Eventually, she got heavily involved in recruiting and publicity for 12-step programs.

7. Fisher's addictions exacerbated her mental health problems too. She publicly struggled with bipolar disorder — and talked about that too.

She spoke candidly about her psychotic episodes and about the times she took upward of two dozen pills to find mental stability. It's not clear whether her openness came about as part of her own coping process or if it was just a side effect of celebrity. Either way, her outspokenness helped many of her fans fight mental health stigma.

8. Yes, she spent some time in a psychiatric hospital as well. But she refused to give in to the shame around that either.

"There is a part of this illness that is funny," she told the L.A. Times. "Because I have the sense of humor I have, things don't prey on me long. And that's why I have it. If I didn't, I would be ... in pain. If my life weren't funny, it would just be true, and that would be unacceptable."

9. Eventually, Fisher stepped away from acting and turned her attention to writing instead.

Her pseudo-autobiographical novel, "Postcards from the Edge," came out in 1987. It was soon turned into a movie largely based on her own experiences with mental health and drug addiction. She followed it with four other novels and several nonfiction books too.

10. Soon, she became one of the most sought-after "script doctors" in Hollywood and was brought in to fix the screenplays of films from "Hook" to "Sister Act" to "Lethal Weapon III" and "The Wedding Singer."

You won't find her name on any of them, as is the case with most script doctor work. But even through it's hard to identify her exact contributions, it's still pretty impressive. George Lucas even asked her to help touch up the "Star Wars" prequels.

11. Fisher even wrote an episode of the popular TV show "Roseanne" that dealt explicitly with psychiatric struggles.

The episode centers on the mental state of Dan's mom, played by Fisher's own mother, Debbie Reynolds.

12. Throughout all of this, Fisher was involved with plenty of famous men. But she owned her sex life and never let those men overshadow her.

She had an on-again, off-again relationship with Dan Aykroyd, and even married Paul Simon for a time — and, yes, she had an affair with Harrison Ford during filming too. These might seem like the kind of things meant for gossip columns, but Fisher owned her involvement in them all with style.

13. She even became the proud mother to a remarkable daughter, who's built a career of her own.

The now-24-year-old Billie Lourd can be seen on the show "Scream Queens," among other things. Lourd's father, Bryan, was a famous powerhouse casting agent who broke up with Fisher and became involved with another man — another emotional devastation that Fisher persevered through.

"People ask if it lessens the blow that he left me for a man, because it’s a rejection of my gender and so isn’t personal. But I don’t care what people say — I was humiliated and betrayed and I believed I’d somehow messed up," she told the Daily Mail.

Eventually, Fisher began to keep a photo of Bryan's husband on her piano. "Because it’s something I made it through. It’s a failure I learnt from. Also, it’s funny. Hollywood weirdness at its best."

14. Fisher found an intimate understanding of all of life's roller coasters — having lived through so many of them.  The more she understood herself and her own struggles, the more she helped out others too.

Musician James Blunt moved in with Fisher for a while in the early-2000s, for example, and she told Vanity Fair in 2006 that they had a strictly therapeutic and non-sexual relationship. "He was a soldier. This boy has seen awful stuff. [...] He would tell me these horrible stories. I became James’s therapist. So it would have been unethical to sleep with my patient," she said.

15. Fisher's writing career soon turned to memoir, where she recapped the ups-and-downs of her life with brutal but hilarious honesty.

Later, she turned her memoir "Wishful Drinking" into a tremendously successful Broadway play, as well as an HBO documentary. Then she followed it up with two more memoirs — because one simply wasn't enough for her whole wild life.

16. All the while, she kept getting older, in public. But she took on the aging process with pride too.

Fisher wasn't always the gold bikinied sex icon that she was when she was younger — no one is. But that's natural, and totally OK. At one point, she became a spokesperson for Jenny Craig to help her gracefully age into the acceptance of older age, and she wasn't afraid to shoot down body-shamers either.

17. The year she died, Fisher won a Lifetime Achievement Award in Cultural Humanism from Harvard.

"Her forthright activism and outspokenness about addiction, mental illness, and agnosticism have advanced public discourse on these issues with creativity and empathy," they said.

Carrie Fisher has played many different roles throughout her life, both on-screen and off. But her strength as a survivor has shone through them all.

Thank you, Carrie, for showing us that it's possible to get through the roller coaster that is life with humor, grace, and perseverance.