Sandra Bullock nailed why we should stop saying 'adopted child' 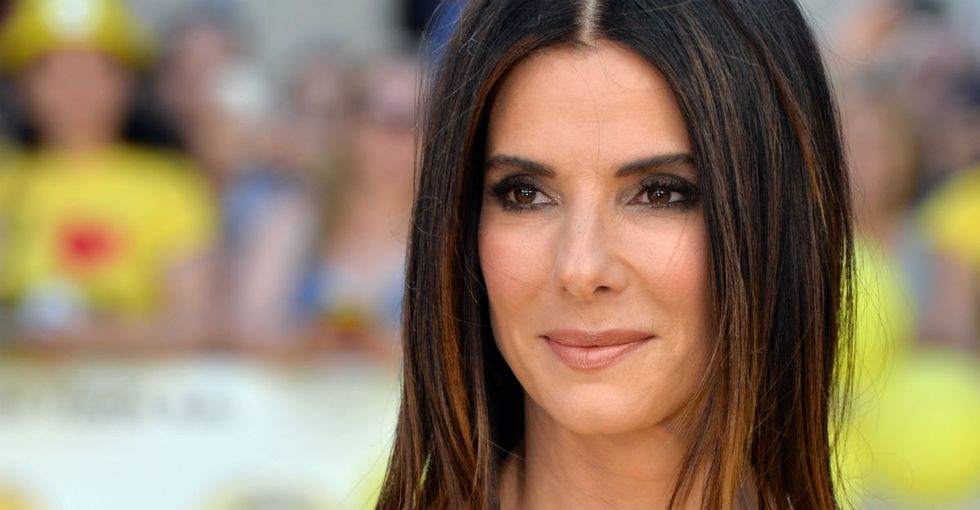 All right, real talk: When's the last time you heard a parent refer to their kid as their "whoops, we forgot to use protection" child? What about their "it took a lot of help from doctors to make this happen" child?

No one talks like that! (OK, other than in a Judd Apatow comedy.) They'd sound ridiculous. Your kids are your kids — regardless of how they became a part of your family. Why do we so often forget to apply that understanding to children who've been adopted?

It's a question actress Sandra Bullock wants people to think about a bit more critically.

Bullock has two kids: 8-year-old Louis and 5-year-old Laila. Louis is the supersensitive one. "I call him my 78-year-old son," she recently told InStyle. And Laila is downright fearless. "She's a fighter, and that's the reason she's here today. She fought to keep her spirit intact."

Bullock adopted Louis in 2010 and Laila, who'd been in foster care, in 2015. When asked by InStyle's Glynis Costin if the overall situation for kids in foster care is improving, the actress got emotional: "Not quickly enough," she answered.

"Look: I'm all for Republican, Democrat, whatever," Bullock continued. "But don't talk to me about what I can or can't do with my body until you've taken care of every child who doesn't have a home or is neglected or abused."

The actress then brought up a great point: Why do we even feel it's necessary to use the term "adopted child"?

"It makes me teary-eyed [wells up]. Let's all just refer to these kids as 'our kids.' Don't say, 'my adopted child.' No one calls their kid their 'IVF child' or their 'Oh, shit, I went to a bar and got knocked-up child.' Let's just say, 'our children.'"

Hearing your kid referred to as an "adopted child" — as if it's crucial to qualify any kid as such — can be a hurtful way of suggesting, albeit unintentionally, that they're somehow less than your own.

It's an issue Upworthy writer Laura Willard explored in 2015: "9 things this adoptive mom would like everyone to know." In the piece, Willard noted how the language we use while speaking about parents who adopt or kids who've been adopted can make a world of difference.

For instance, please don't ask Willard if she plans to "have any kids of [her] own." Her kids are her own.

"It's a wording issue for most adults," Willard explained of the question. "But for kids who are struggling with attachment or working to feel secure in their families, those words matter. When you ask this in front of kids who were adopted, you might be shaking an already unstable foundation the family has worked hard to build."

These might seem like relatively small and inconsequential changes. But to parents and kids alike, they matter!

Families are not made with cookie cutters, after all. They come in all sizes, colors, ages, and genders — and no one construct is more legitimate than any other.

It's important that the language we use acknowledges this reality.

As Bullock told People magazine in 2015: “If a traditional home is one that is filled with lots of love and poop jokes, no sleep, schedule books filled with more kids' social events than adults' and lots of yelling over who touched who first … then I have a very traditional family."

“Seeing a grown man get so excited about Capri Sun is extra wholesome."

'Dee' the delivery guy stoked to get some Doritos.

Recently, one of the Barnetts’ delivery guys, a joyous fellow that we believe is known as Dee, went viral on TikTok because of his positive reaction to receiving some snacks during his deliveries. The snacks are tasty, no doubt. But it’s also wonderful to feel appreciated. After Toni posted the video it received over 100,000 views.

Cat hilariously rats out owner in front of the landlord

Some people, on the other hand, get creative. I once came across a post on social media where someone claimed their pit bull puppy was actually a Silver Labrador. But one woman on TikTok was harboring a secret cat in her rental that had a no pets policy, and either her cat was unaware or he was aware and was simply being a jerk.

His perspective is spot on.

"Time is the one thing we cannot increase.”

Over his seven years as host of “The Daily Show,” Trevor Noah brought us laughter and valuable insights, even with a pandemic and political upheaval. He made such a positive mark that the announcement of his departure from the show came as bittersweet news to fans.

During an interview with Hoda Kotb of “Today,” Trevor Noah gave further explanation to his personal decision to leave, and in typical Noah fashion, it touched on something universal in the process.

Keep ReadingShow less
insightful
Get stories worth sharing delivered to your inbox
By signing up you agree to Upworthy's privacy policy.
popular

"She told me to keep doing something good."

Jacalyn Wetzel
Photo by Kelly Sikkema on Unsplash
woman holding a cup of tea, writing in a notebook

It's no secret that everyone could use a little kindness in their lives and it can come in many forms. Sometimes it's the neighbor cutting your grass when your husband's away and you're too busy to get to it yourself. Other times it's sending a card to the elderly widow down the street.

One woman in Arkansas has taken to spreading kindness through writing letters to strangers. Allison Bond, 25, started writing letters over a year ago during COVID-19 when she couldn't attend school due to her medical condition. Bond has cerebral palsy and is at greater risk for serious illness should she contract the virus. Writing letters was an act of kindness that didn't require a trip out of the house.

Bond began by writing to soldiers and inmates. In fact, the first letter she received back was from a soldier. Bond told 5News, "I have one framed from a soldier. He had all his battle buddies sign it. So I framed it so I could put it up." She's kept every letter she's received.

Keep ReadingShow less
Get stories worth sharing delivered to your inbox
By signing up you agree to Upworthy's privacy policy.
Trending Stories
Culture