14 eye-opening comics about life as a transgender person.

You'll laugh, you'll cry, you'll get a greater understanding of what it's like being trans. 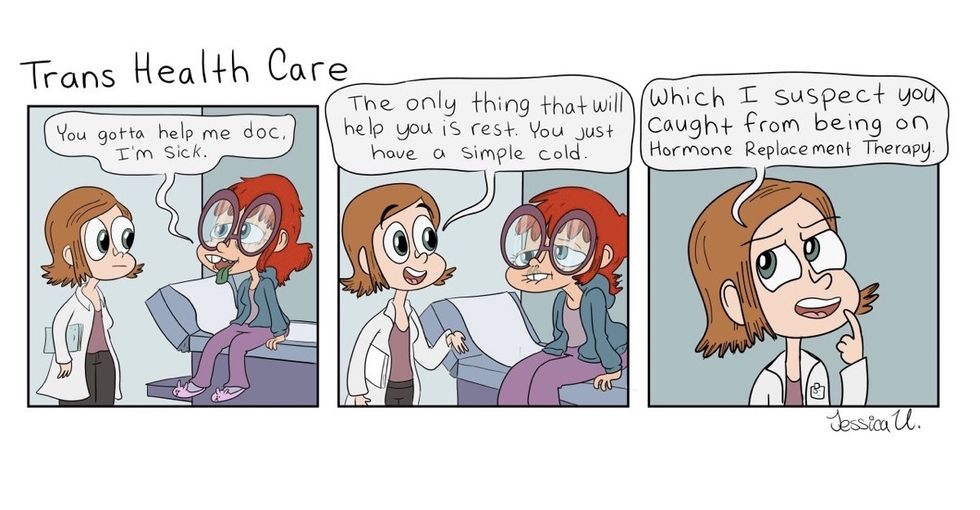 When Seattle-area artist Jessica U. started making comics about her life after coming out as transgender, she never thought she'd get the response she did.

After falling out with some close friends, finding that even family would get very easily annoyed with her, and losing two jobs in a row, she needed some kind of outlet to vent her frustrations.

"Everyone made me feel like it was all my fault, like transphobia inside them simply couldn't exist because they pledged their support for me at one point," she says. "I really started to believe that I turned into the awful person and worker many said I become. But when I started drawing the comics about transphobia, other trans people responded immediately, saying that they've been through a lot of the same stuff."

It's been YEARS. But I still wonder about the friends I used to have who abandoned me after my transition. I'm just… https://t.co/WrS6MAdoDp
— Lollipop Nightmare (@Lollipop Nightmare)1496611454.0

She kept writing, drawing, and finding her audience. While she doesn't necessarily make her comic for people unfamiliar with trans issues, if someone learns something new, that's a great bonus.

Here are 14 of Jessica's best comics about her life as a trans woman.

Maybe you'll get a chuckle out of them or maybe you'll learn something new — or better yet, both!

(Psst: If you're unfamiliar with any of the terms used in these comics, check out this awesome glossary of trans-related words on author Julia Serano's website.)

1. Workplace harassment is real, even if it's not always intentional.

According to a 2015 survey by the National Center for Transgender Equality, 30% of all trans people in the workforce had been fired, denied a promotion, or harassed at work for being trans. There's no federal law that explicitly protects people on the basis of gender identity, though some have argued in court that the ban on sex-based discrimination in the Civil Rights Act should apply. Comic by Manic Pixie Nightmare Girls.

2. If you're an ally, remember to treat trans people as people. Be cool, be kind.

If you want to be a good ally, read this! Comic by Manic Pixie Nightmare Girls.

3. Explaining gender dysphoria is tricky, but think of it this way...

Gender dysphoria — a kind of dissonance between the gender you are and the one you were assigned at birth — can be especially difficult. Comic by Manic Pixie Nightmare Girls.

4. "Trans broken arm syndrome" is real, it's a pain in the butt, and it's also a public health issue.

"Trans broken arm syndrome" is what happens when trans people go to the doctor for something completely and totally unrelated to them being trans (for example, a broken arm) and are told that it's probably the result of their hormone treatments. It's not fun, and it makes actually getting treated for something (a cold, the flu, strep throat, and everything else you can imagine) a lot harder than it needs to be. Comic by Manic Pixie Nightmare Girls.

5. Sometimes people just don't get why what might seem like a minor annoyance is actually a pretty big deal.

Jessica's comic on this subject came out back when a "Caitlyn Jenner" Halloween costume was being marketed to men, and yeah, that was pretty awful. It was about more than just that one costume; it was also the fact that the costume pushed a stereotype about trans women being burly men. Comic by Manic Pixie Nightmare Girls.

6. Singular "they" is perfectly acceptable, and it shouldn't be a big deal if you're asked to use it.

Most people actually use singular "they" all the time in their speech whenever they don't know the gender of the person they're talking about. Comic by Manic Pixie Nightmare Girls.

7. It's not fun when other people try to create criteria for what it means to be a man or a woman.

Jessica's premise — an ally who says that he'll only call a trans woman "she" if she's had gender-confirmation surgery — is super-relatable and messed up for a bunch of reasons. For one, that seems to suggest that people should have to announce what their genitals look like if they want to be called the correct pronouns. Just take people at their word. Comic by Manic Pixie Nightmare Girls.

"What do your genitals look like?" "How do you have sex?" "Can I see a 'before' picture?" "What's your 'real' name?" These are all kind of personal questions that can be really, really uncomfortable to have to address — especially when the person asking is someone you just met. Comic by Manic Pixie Nightmare Girls.

9. Pronouns and names are important.

As a trans person myself, it can be really hard for me to believe that someone truly accepts me for who I am if they continue to refer to me by the wrong name and pronouns behind my back. It gives the impression that the other person doesn't actually accept me but is merely humoring me when I'm around. Comic by Manic Pixie Nightmare Girls.

10. Attacks on trans rights are happening all around us. This is where allies are really needed.

And yes, the situation described in the comic actually happened. North Carolina, Texas, and other states have experienced or are experiencing some pretty intense anti-trans messaging to push for discriminatory laws. The truth is that the common argument that policies protecting trans people's rights to be able to use public restrooms will be exploited by cisgender men "pretending to be trans" to sexually assault women isn't actually backed up by data — so they create situations, which is majorly messed up. Comic by Manic Pixie Nightmare Girls.

11. The "debate" about whether trans people are legitimate finds its way to newspaper opinion pages and TV segments on a frustratingly regular basis.

It seems like just every few weeks a major media outlet in the U.S. or Europe will publish some variation on "What Makes a Woman?" or "Are Trans Activists Going Too Far?" The totally bizarre thing is that these stories tend to use the same arguments over and over and over and — well, you get the idea. It's pretty frustrating to have your existence talked about as an abstract hypothetical when there are so many very important, real things happening in the world. Comic by Manic Pixie Nightmare Girls.

12. Compliments can have a way of taking weird turns — and often aren't compliments at all.

"I would have never guessed" is a common "compliment" people say to trans people, but that's just because there's this idea that trans women and trans men all look "visibly trans." The truth is that trans people are everywhere, and even if you don't think you know a trans person, you probably do. Comic by Manic Pixie Nightmare Girls.

13. There's the whole "Oh no, is my existence going to be the punchline again?" anxiety when it comes to watching, well, anything.

"Ace Ventura," "Silence of the Lambs," "The Crying Game," and more; there's no shortage of less-than-sensitive entertainment that either uses trans people as a surprise twist or a cheap joke. Honestly, it wouldn't be that bad if not for the fact that there really aren't a whole lot of positive portrayals to counter the negative. Comic by Manic Pixie Nightmare Girls.

14. It's difficult to be pigeonholed as "the trans person." People are complex, and not every trans person spends every waking moment thinking about trans-ness in the world.

We're all more than just our gender, trans people included. But seriously, it can be exhausting to constantly have to explain who you are to the world like a sentient encyclopedia of gender. It's just something worth keeping in mind. Comic by Manic Pixie Nightmare Girls.

Check out the rest of Jessica's comics at ManicPixieNightmareGirls.com and visit her Patreon page for more exclusive content.