12 tips for that perfect nature selfie that won't hurt anyone or anything.

Given some recent nature photo and selfie disasters, this is worth saying. 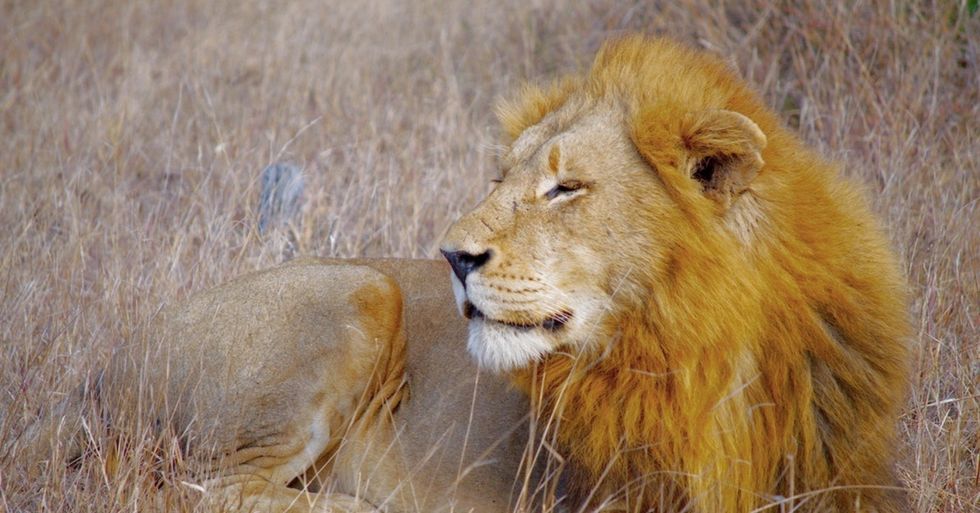 There are some basic things we all know need to be true if you want to elevate a selfie from "cool pic" to "truly epic."

Things like finding good light (nobody wants to see a washed-out ghost), putting your face in the top left or right of the frame (obey the rule of thirds!) and, for Pete's sake, show some emotion! Do you really want your Tinder pic to look like you're the most boring person on Earth?

And of course, if all else fails, get an awesome photo partner or background:

However, there have been some ... upsetting ... examples in the news lately of people taking that last tip too far, especially when it comes to selfies with wild animals in the great outdoors.

So here are a few tips for taking selfies in the wild.

You know, so you can get your sweet profile pic without looking like a jerk on social media and/or accidentally murdering a helpless dolphin.

1. First of all, just don't mess around with wild animals.

800 pounds of leave it alone. Image from Bobisbob/Wikipedia.

Always respect an animal's personal (creatural?) space. Wild animals can be dangerous and unpredictable, but more than that, they are not our pets. They don't want to be touched. They want to be left alone.

Instead of drawing attention to bad behavior, have an adorable little shark. Image from Jeff Kubina/Flickr.

Earlier this week, a Florida man found a shark stuck in the beach surf. Instead of letting it be or helping it return to deeper waters, he grabbed it by the tail and dragged it further up onto the sand for a photo op.

Dude. No. How about you just take a regular picture instead? I mean, it's a shark! It's already interesting without your face in the pictures as well.

3. You should not manhandle a peacock.

Over the weekend, two peacocks died at a China's Yunnan Zoo after visitors picked them up and handled them roughly in their quest for a great photo op. They even plucked out the peacock's feathers as souvenirs! Come on, people! Zoo animals aren't pets! And you can buy a peacock feather at a craft store for like a dollar. Don't yank one out of a living creature.

What you SHOULD do is this: Wait for it to spread out that amazing tail fan and take a selfie with it in the background. Boom. Still you and a peacock in the same selfie, but this way you don't hurt it, and it doesn't hate you and die.

4. For the love of all that is good, leave the f**king dolphins in the water.

La Plata dolphins are so rare, we don't have many good pictures of them not being attacked by beachgoers. Instead, look at this happy bottlenose dolphin. Image from Claudia14/Pixabay.

Last week a group of ahem — asshats — and I call them that because the real term would get me banned from the Internet (yes, the entire Internet) — killed a rare La Plata dolphin in Santa Teresita, Argentina, after removing it from the water and passing it around the beach so people could take selfies with it.

If they really wanted a picture of the rare animal, why not use an underwater camera instead? Or take a photo of it in the water swimming happily?

And it's not just animals that have been treated badly...

5. Sorry, friends, but nature is not improved by your initials or declarations of love.

In fact, carving your name into trees and rocks can land you in a lot of hot water. Actress Vanessa Hudgens ("High School Musical," "Grease: Live") and her boyfriend are being investigated after posting Instagram pictures of their names carved into the rocks of the Coconino National Forest in Arizona.

Pro-tip, Vanessa: Next time you're looking for a way to proclaim your eternal love, do it in a Disney Channel musical rather than by permanently defacing nature.

Don't be like them. And don't be the person who is under investigation for painting random, poorly drawn faces in 10 different national parks, or like the guys who now have to pay fines and restitution after ruining an ancient rock formation (those guys got kicked out of the Boy Scouts, too — that's how serious of an offense this is).

So that's a bunch of don'ts. But what *can* you do to take better selfies in the wild?

6. Be respectful. Take photos from a distance.

The best way to take pictures of wild animals is usually from a distance, which is why real-life wildlife photographers often use long-distance telephoto lenses.

Which, by the way, you can now get for your phone.

Attachments like these add a fish-eye effect, but you can get long-distance lens too. Image from PolicyRocker15/Wikimedia Commons.

7. Make sure you have solid footing and aren't in danger.

You might think this piece of advice is self-explanatory or so obvious it goes without saying. But yet:

This is Hālona Blowhole in Hawaii.

As pretty as it is, it's already killed four people.

The blowhole is totally unpredictable, and the nearby ocean currents are legendarily strong, meaning many people have been swept out to sea while trying to score a sweet vacation snapshot.

No photo is worth dying for.

8. Instead, drink in the sights with your eyes and let Instagram take care of itself for a little while.

9. That way you can appreciate Earth's amazing natural beauty.

10. Without annoying the wildlife or risking your own life.

11. Just remember to take your pics from a safe distance, and when you get home then you can get those sweet, sweet, Facebook likes.

12. And if all else fails, there's always Photoshop.