Worms that can eat plastic could save us from destroying the planet. 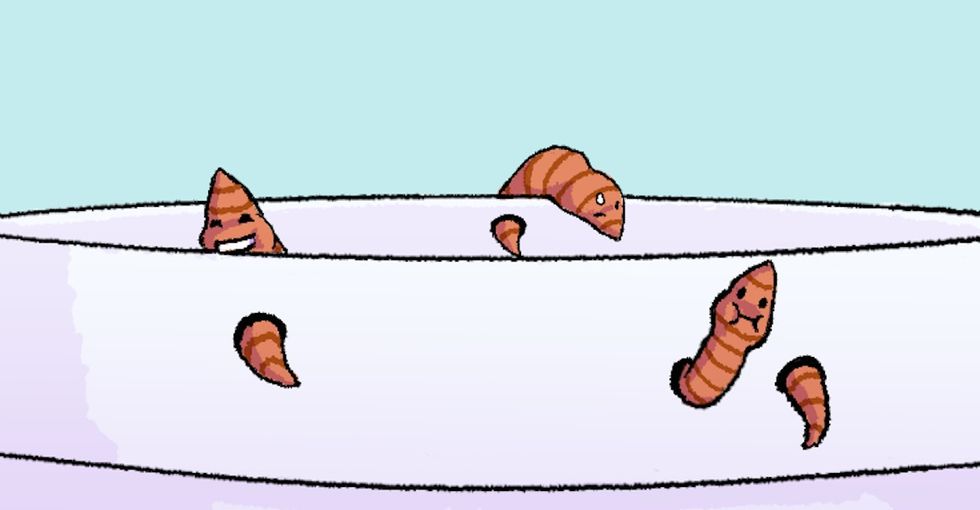 You tell me what's more repulsive: A Styrofoam cup laying on the ground...

...or a pile of slimy, pulsing mealworms?

Wait! Before you answer, what if it was more than just one piece of Styrofoam — like 33 million tons of it?

And what if it wasn't just cups, but Styrofoam packaging, water bottles, and all different kinds of discarded plastic?

And what if it wasn't strewn across the grass, but instead dumped into one massive trench? Or worse, what if a bunch of it was just floating in the ocean, waiting to be swallowed up by some helpless sea creature?

When you put it like that, the answer seems pretty obvious.

But here's something new and surprising: Those wiggly little mealworms might just be the key to fighting plastic pollution all over the world.

Time for us to fess up: We, as a species, are not very good at recycling.

In the United States alone, every year we throw away about 33 million tons of plastic waste (including Styrofoam, which is basically fluffy plastic), with less than 10% of it being recycled properly.

Now, it's not all our fault. Modern recycling techniques have come a long way, but they aren't perfect. According to Popular Mechanics, materials like the ones used to make soda bottles can only be recycled (or "downcycled" into lesser products) so many times.

That means, one way or another, most of it will end up in a landfill eventually, where it could take centuries to biodegrade.

Researchers just discovered that mealworms can eat nothing but Styrofoam, turn it into biodegradable worm poo, and get all the nutrition they need.

A collaborative study between Stanford University and Chinese researchers found that 100 of these mealworms, which are essentially baby beetles, could consume almost 40 milligrams of Styrofoam per day. Now, that's not a lot (it takes 453,592 milligrams to equal one pound), but the implications are much, much larger.

There are plenty of bugs out there that eat plastic, but this is the first time researchers have confirmed that what comes out the, er, other end is, in fact, totally natural. And even better? Eating the stuff doesn't harm the worms in the least.

In other words, something magical is going on inside these mealworms that lets them turn hazardous plastic into harmless organic waste.

Studying the chemical environment inside the mealworms' gut that makes this possible might lead to better recycling techniques.

When I first read about this, I imagined government officials unleashing hoards of mealworms on our landfills for an epic buffet, but unfortunately, that doesn't seem super plausible — remember, they eat really, really slowly.

But what if we could emulate the mechanisms inside their stomachs that break down the plastic? If we could just recreate that environment on a larger scale, we wouldn't have to work so hard melting down bottles and turning them back into new bottles.

We could just transform them into the equivalent of worm poo, which the researchers say can be used as soil and is totally safe for the Earth.

But you know what? None of this will matter if we don't get better at sorting our trash and recycling the things that ought to be recycled.

I never thought I'd say this, but if we work together with the mealworms, we really can make a difference.