Why we really shouldn't laugh at those naked Donald Trump statues. 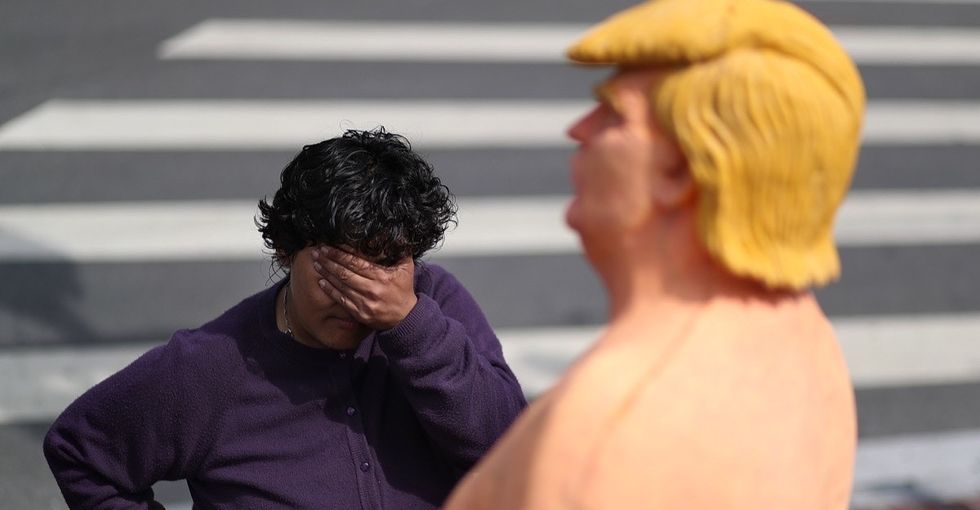 There are a lot — and I mean A LOT — of valid reasons to criticize Donald Trump.

There's the fact that he mocked a disabled reporter. There's when he said that women who have abortions should be "punished." There's his belief that the concept of climate change was "created by and for the Chinese in order to make U.S. manufacturing non-competitive."

There's his insistence that President Obama wasn't born in the U.S. and might be a secret Muslim. There's his long history of misogyny. There's his praise of Saddam Hussein. There's the fact that he has a history of borrowing memes from white supremacists. There's his plan to deport 11 million undocumented immigrants and put a (temporary) ban on Muslims from entering the country.

And, well, you get the idea.

Slate lists 183 things (and counting) Donald Trump has said or done that they believe make him "unfit to be president." In any case, maybe you support him or maybe you don't. The point is that there are some really valid concerns people have about putting the man in the White House.

Huuuuuuge reasons to criticize him. Photo by Chip Somodevilla/Getty Images.

On the morning of Aug. 18, 2016, statues of this potential president-to-be popped up around the country. Naked statues.

Attributed to anarchist art collective, Indecline, the series is titled "The Emperor Has No Balls," a play on Hans Christian Andersen's "The Emperor's New Clothes." As the title suggests, each statue is missing a certain part of its anatomy (and also represents a nearby body part as being on the small side of things).

Bystanders photograph and pose with a statue meant to resemble a naked Donald Trump in Union Square Park in New York. Photo by Spencer Platt/Getty Images.

Even in removing the statue, the New York Parks Department had a bit of fun at Trump's expense. "NYC Parks stands firmly against any unpermitted erection in city parks, no matter how small," said parks spokesman Sam Biederman in a statement.

At first glance, it's pretty funny, right? It takes one of Trump's deepest insecurities and puts it on full display to the world.

This is the man, remember, who used his platform during one of the Republican primary debates to defend the size of his hands.

"Look at those hands, are they small hands?" said Trump in response to a comment by rival Sen. Marco Rubio days earlier. "And, he referred to my hands — 'if they're small, something else must be small.' I guarantee you there's no problem. I guarantee."

"Look at those hands, are they small hands?" Photo by Chip Somodevilla/Getty Images.

While the commotion over the size of Trump's hands began as a joke written in a 1988 issue of the now-defunct Spy magazine (they called him a "short-fingered vulgarian"), it's haunted him ever since. In 2011, seemingly unprompted, he brought the insult up in an interview with the New York Post, saying, "My fingers are long and beautiful, as, it has been well documented, are various other parts of my body."

So clearly this is something that gets to him. As he's someone who has a tendency to attack others for their appearance (he once went on a two-minute rant against Rosie O'Donnell in which he called her "disgusting," "a loser," and repeatedly mocked her weight), it seems like he should be fair game for his own appearance-based criticism, right? Well...

In times like this, It's important to remember the message Michelle Obama delivered during her powerful speech at the 2016 Democratic National Convention.

During a section devoted to how she and her husband set out to raise their daughters, Sasha and Malia, the first lady touched on an important life lesson: how to deal with a bully.

Mocking someone for their appearance? Yeah, that's something a bully would do.

On Facebook, writer Ijeoma Oluo called out the folks who are reveling in Trump's appearance-based public humiliation, echoing that same sentiment. "I hate how often I have to say this, but if we are truly committed to fighting toxic masculinity, cis-hegemony and body-shaming we cannot tie Trump's sexist, racist, ableist, Islamophobic, classist bullshit to his dick size," she writes.

I hate how often I have to say this, but if we are truly committed to fighting toxic masculinity, cis-hegemony and...

Is Donald Trump a bully? Yes, yes he is.

But do we have to stoop to his level in order to criticize him? No, we don't.

"When they go low, we go high." Photo by Justin Sullivan/Getty Images.

Keep Reading Show less
diversity and equality
Get stories worth sharing delivered to your inbox
By signing up you agree to Upworthy's privacy policy.
Trending Stories
skateboarding
Culture