Why protesters at the Supreme Court want you to boycott Dollar General. 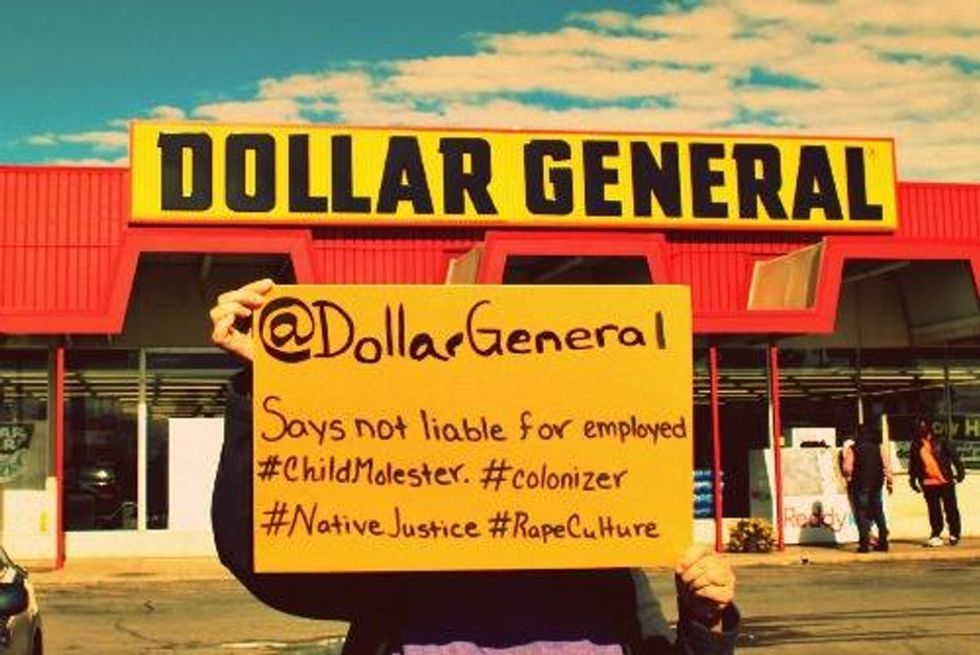 In 2003, a teenage boy accused his manager at a Dollar General store of sexually assaulting him at work.

The boy, who is known as John Doe to protect his identity, is a member of the Mississippi Band of Choctaw Indians.

After the U.S. attorney's office declined to press charges against Dollar General, John Doe and his family ended up suing Dollar General, as the Indian Country Today Media Network reports.

It's no secret the United States has a rather unjust legacy when it comes to Native Americans.

And, lest we think it's a legacy left in the past, John Doe's case of Dollar General v. Mississippi Band of Choctaw Indians, heard by the Supreme Court today, is a reminder that it continues in the present.

Dollar General has argued that Native American tribes do not have civil jurisdiction over an outside corporation doing business on tribal land. Basically, this means that if the Supreme Court rules in favor of Dollar General, outside businesses may be able to commit other crimes on tribal land without fear of a lawsuit.

For the Mississippi Band of Choctaw Indians, the SCOTUS ruling could undermine its ability to protect tribe members.

Sexual assault happens to native women at higher rates than any other racial group in the United States. According to the National Congress of American Indians, native women are at least two times as likely to be sexually assaulted or raped compared with all other races.

The Maynard Media Center on Structural Inequality discusses how such high rates show just how underserved native women are when it comes to sexual and domestic violence and how underreported these crimes are. The same is likely even more true for native men.

Supporters gathered outside the Supreme Court in December 2015 to show solidarity with John Doe and his tribe.

“When survivors have little to no access to justice, then sexual violence goes through the roof. And that's what's happening in Indian country," Rebecca Nagle, from the organization Force: Upsetting Rape Culture, told Upworthy.

As a result, 86% of Native American victims of sexual violence report their perpetrators as non-Native American, according to the National Congress of American Indians.

Along with other Native American tribes, Force: Upsetting Rape Culture is leading much of the activist effort supporting John Doe's case. The group demonstrated in front of the Supreme Court the morning the case was heard with The Monument Quilt, a project similar to the AIDS quilt, that spans the entire United States. Rape and abuse survivors and allies of any gender can contribute squares to the quilt.


The monument quilt stops in Baltimore in August 2014. Photo by Rebecca Eisenberg/Upworthy.

Giles and 75 other people added squares to the quilt in advance of the protest, she told Upworthy over the phone.

“It's healing. It's very cathartic to put it down there and say my story's being told and being carried along with all these other stories and all these other supporters of people who say, 'You know what? You're not alone, and we're here to support you,'" Giles said.

"People need to know about [this case] and express outrage," Nagle said about the little media coverage that John Doe's case has gotten.

The fate of the country's Native American reservations is currently in the hands of Supreme Court, yet Nagle and Giles think the public at large can help.

Giles implores people to boycott Dollar General: "Don't give them the opportunity to continue to stay in business, basically paying for a perpetrator, for a child molester, to be protected by a big corporation."

Those wishing to express their support cand o so under the #shameondollargeneral hashtag on Twitter. Force: Upsetting Rape Culture has a guide on how to do that.