Why a small-town radio show gets call-ins from across the country every Monday night.

The best of hip-hop and the sounds of home, straight through prison walls. 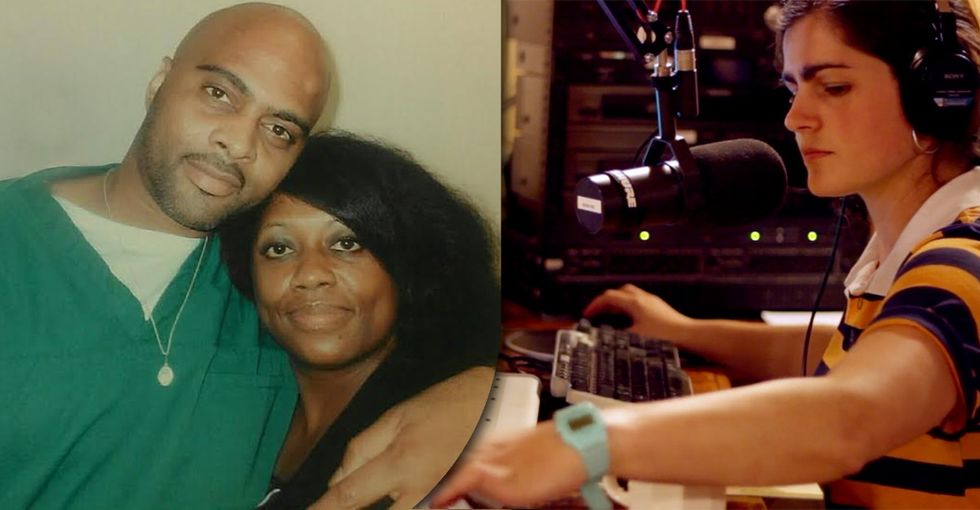 William Griffin was a teenager when he had his first run-in with the law. Now in his mid-40s, he's been in prison for a quarter-century.

Michelle Hudson was a childhood friend of Griffin's, but the pair lost touch when her father's military job relocated her family. Returning to Virginia decades later, she learned about the mistakes that landed Griffin in prison.

"It was just street life, hanging out, doing the wrong thing," says Hudson, describing the unfortunate events that led Griffin from "street life" to "sentenced to life."

Griffin's crimes weren't the fatal ones we typically associate with a life sentence, but he'd made one too many mistakes for the Commonwealth of Virginia. Between the state's three strikes law and an unsympathetic judge on the bench, he was ordered the maximum punishment.

For Hudson, a casual inquiry about an old friend became a mission to help him. What she didn't predict was that mission blossoming into mutual love and eventually an engagement — despite the challenges and uncertainty his life in prison presented.

In the beginning, Griffin and Hudson reconnected with help from "Calls From Home," a radio show broadcasting out of the small mountain town of Whitesburg, Kentucky.

Every Monday night after their nightly hip-hop program, WMMT-FM invites audiences to record messages of encouragement for their listeners in over a dozen prisons throughout Central Appalachia.  The station records calls from 7-9 p.m. local time to be aired during the one-hour show at 9 p.m.‌‌

Though Whitesburg is small enough that you may be reading about it for the first time, believe it or not, the radio station never has a shortage of calls. In fact, former co-host Sylvia Ryerson wrote, as more prisoners tuned in, they started receiving calls from all over the country. Here's why:

The majority of U.S. prisons are built in remote regions like eastern Kentucky or upstate New York, which makes visitation a challenge for many families.

Griffin, for example, spent the first 23 years of his sentence at Wallens Ridge State Prison in Big Stone Gap, Virginia, an hour south of Whitesburg and hundreds of miles from Hudson and the rest of his family.

In 2016, he was transferred to a prison closer to home, where after decades of isolation he finally enjoys weekly visitation. But during his time "in the mountains," Griffin says he was lucky to see a family member once a month.

‌"He said it was like 'dialing to his heart,'" Hudson said about Griffin's reaction to her first "Call From Home" in 2012. Photo via Michelle Hudson, used with permission.‌

"Over time, we start to think we don't even exist, that nobody cares what we're going through or the change we're trying to make," he says. "I deserved corrections. I deserved punishment. But I didn't deserve to lose my life."

For prisoners like Griffin, the inflated outgoing call rates, prospect of mail interception, and restrictive visitation rules are barriers enough. But the distance courts create by sending them to far-off facilities present often insurmountable financial hurdles for their families to visit.

Regular visitation between prisoners and their families can help reduce the likelihood of criminal offenses after they are released.

A 2011 study by the Minnesota Department of Corrections found that "visitation in general significantly decreased the risk of recidivism."

And according to the Centre for Justice and Reconciliation, more "visitor-friendly" policies could be a boon to public safety by establishing for offenders "a continuum of social support from prison to the community."

But since existing policies don't make regular visitation easy, "Calls From Home" has helped fill that void for 17 years, becoming a lifeline of sorts for its incarcerated listeners.

"I'm always amazed at the persistence and love that comes in every Monday night," says co-host Elizabeth Sanders. "Some days are harder than others. Sometimes you end up crying. Sometimes you laugh with them. But everyone is just so thankful for the chance to shout out to their loved ones."

Though the messages they record are usually directed at specific individuals on the inside, Ryerson believes sharing their families' stories can help change public perceptions about people with criminal backgrounds.

"When you air voices from their children, their grandmothers, their church pastors, it allows them to be seen as whole human beings that have families and communities that love them and want them to come home."

Ryerson has expanded on "Calls From Home" with a new project called "Restorative Radio: Audio Postcards."

In this longer-form radio series, she collaborates with family members to create immersive audio experiences that transport prisoners into their families' lives while also revealing to audiences the fundamental humanity beneath their criminal records.

Hudson was one of Ryerson's first participants, recording over 10 hours of her life and interactions — cooking, chatting with family and friends, visiting the local swimming pool with her kids, attending her daughter's dance recital — that ultimately became a one-hour "postcard" to Griffin.

"These are not the love sounds he gets to hear every day," says Hudson. "He hears chains, prison guards, and prison doors slamming shut, which can make a person very cold. We wanted to warm his heart, bring that humanity back to him, because they try so hard to take that away from them."

Hudson explained how making the postcard became a form of healing not just for Griffin, but also for the people she recorded. "It brought him closer to his family and his family closer to him," she says, noting how it reunited him with his brother and even the son he never knew.

Griffin's story shows how even in the direst circumstances, a little bit of family contact can go a long way toward prisoner rehabilitation.

"I believe something good is going to happen for me. The show helped my wife come into my life and open the door for me to believe in myself again. Now I want to help other people," he says, adding that he hopes to one day be a guide for at-risk youth. "I have a testimony, and I want to bring it to people who want to do better."