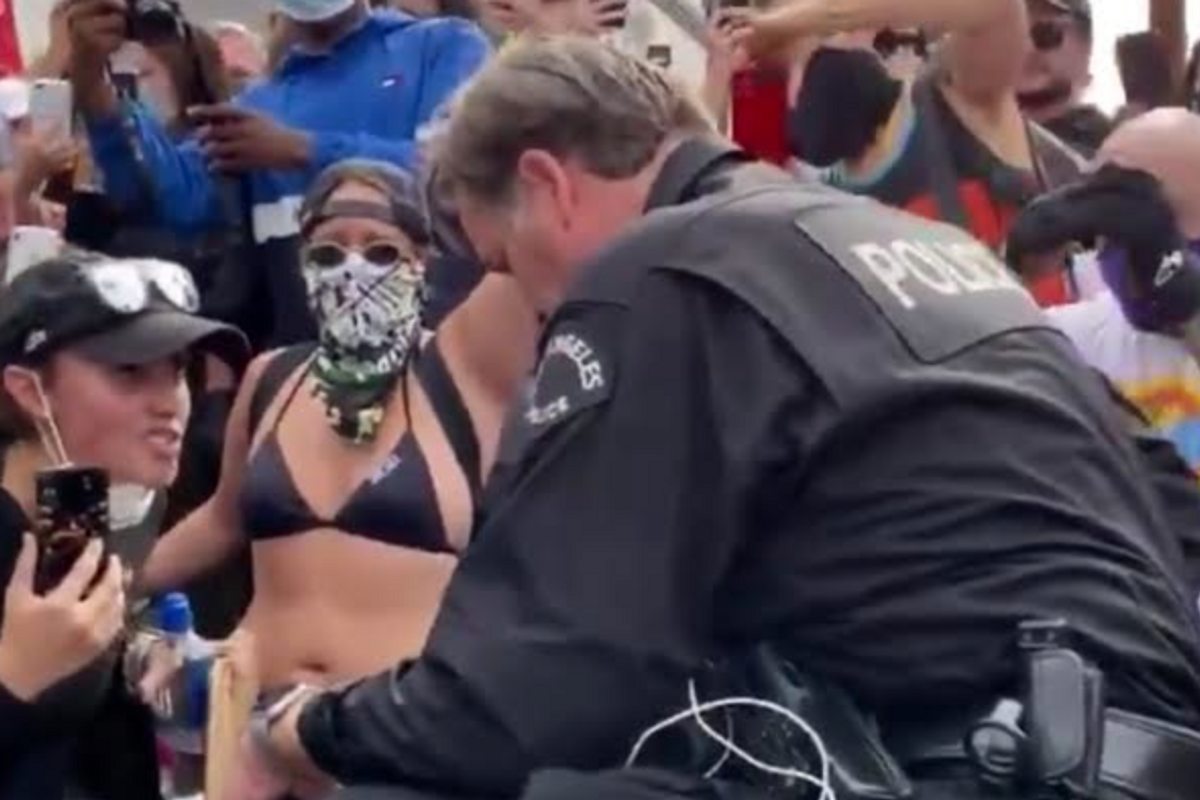 Commander Cory Palka marches through hundreds of protestors on Sunset Boulevard in West Hollywood, as they form around him in a circle. On his uniform, there's a sticker with a peace sign drawn in black marker. As he begins to speak, the leader of the protest hands him a megaphone. The crowd falls silent and he addresses them: "We do not want enemies. We do not want to go against you. I will acknowledge the tragedies that have occurred throughout this country regarding racism and the police. I'm trying to express my heartfelt pain that you feel. Please listen to my heart. We do not want to come in here and be aggressive and firm," he says. "We want you to peacefully protest."

As he looks into a crowd united by anger, Officer Palka explains that he doesn't want to invoke fear, throw tear gas or shoot rubber bullets. He claims he reads all the protest signs and feels the pain that everyone is feeling right now. Many protesters have been peaceful, but there have been tense confrontations with police over the past six days, and according to the LA Times, resulting in 700 arrests.

"We want to allow you to engage in your first amendment rights. We owe that to you. I want to give that to you. At the same time, I don't want a rock thrown at my head. I don't want to put a baton to any of you. I do not want any of you hurt. I want you to be upset, frustrated, voice your frustrations and express your heart and express the pain you feel for George Floyd."

He begs the protestors to collaborate with him. "Let's do it together. Let us protect you. I see beautiful children in front of me. We need to show these kids we can go through our pain together. As a team, we can do it together. I want you to continue doing what you are doing. I want you to express your freedom. I've been doing this for 34 years and I have great relationships with all races and all sexes. Let's celebrate your frustration, let's be angry and upset. It's not our intent to shoot and it's not our intent to harm you."

Officer Palka's eyes dart from building to building. He pauses, reflecting on the beautiful city around him, begging others not to destroy it. He encourages people not to loot, but rather come together and protest in peace. He holds up his helmet. "If I take a knee with you guys, will you give me your verbal acknowledgement that this is a peaceful rally?" he asks the protestors.

Everyone cheered "Take a knee, take a knee."

He put one knee to the ground, bowing his head. Some protestors reached out to shake his hand. The first one was black. "We stand in this together," Officer Cory says, holding up the megaphone with his right hand as the crowd cheers louder.

Veteran Nathaniel Johnson, a protester in full military armor, a gas mask wrapped around his neck and bullet proof vest, stands with a sign that reads: "I swore to protect Americans + Freedom. Not harm them. Vets 4 #BLM." He's been protesting for a few days but this was the first time he went out with his uniform. He wanted to send a loud message. "Before I came out as just a person in normal clothes. I tried to talk to the police, human being to human being and they looked through me. They didn't see me. Now that I'm in uniform, they have no choice but to look at me," he says. "I'm a solider. I'm not part of the looting, I don't condone that. But I'm on the opposing side. I'm here to speak for you guys, for all of us."

Veteran Johnson claims that on Friday night in Downtown Los Angeles, he was peacefully protesting with his girlfriend and a few friends. While their hands were in the air, he claims the police officers tear gassed and shot rubber rounds at them, severely injuring his girlfriend, who is now having surgery in the hospital. A swat team even tried to run them over with an armored vehicle. He heard one officer say, "Get him," as he started shooting Johnson with a shotgun. Quickly, Johnson retaliated, throwing a smoke grenade to get out of harm's way.

"It's disgusting what happened," Johnson continued. "I'm very skeptical of the message [Cory's] sending. Listen, the last messages they have been sending me is they don't care. My dad is black and my mom is white. I'm a bi-product of America. I've been discriminated against as an African American. I know what the police do. I get it. I'm not going to agitate the police, but when they start shooting people, I'm out here saving lives with my trauma kits. I'm exhausted. I haven't slept in three days. But I'm here."

As the protests continued, Devion Coleman, a young black man, found inspiration in Officer Palka taking a knee. "There are going to be people who dislike it, but you can't please everybody. He made an effort," he says. "As long as there is police violence and as long as there is injustice, inequality and racism, you can protest it peacefully. I think it's absolutely necessary. This was a very peaceful and very good day. I think it showed solidarity. They are listening and giving us some time of peace and I think it's really good. Now it's about reform and real justice."

Around curfew time, protestors chanted three words that George Floyd said before he died: "I can't breathe." They marched away, their posters clenched in their hands, as the sun set. Actor and writer Brahmanleen Collins holds the sign "We Matter" while thanking another black police officer for his service. "I captured the moment. I was thanking him for his service and feeling in my heart that we would never see him in a video like the one we are protesting. That goes for all the officers out here. They matter too."

Robert Hayes, who filmed Collins thanking the officer, says that he's always been a person of action and thinks there's more to be done. "I'm grateful for people who are standing up for the black people, the people of color, standing up for me," he says. He's also glad people are using their platform and voice to speak out against racism and bigotry.

He believes, right now, all emotions are valid, but channeling them in a positive way would likely ignite change. "I have never been a promoter of wreaking havoc, that's what's been going on, but I will not invalidate the way people choose to express their emotion. It's been going on far too long," he continued.

"But being more positive will allow us to reap benefits short and long term. We are hurt and we are in pain. I think we need to strategize and mobilize accordingly, so that we won't tear down the communities we love and live in and that we are building for our children and our grandchildren."

Hayes pauses a moment, slowly pulling down his mask, sharing the times he felt fearful or discriminated against. He looks up, a smile on his face and continues, "But, you know, I think that officer taking a knee is exactly what we need."