When this blonde famous woman reaches for her hair, I'm *really glad* it's all a joke.

Satire does a good job of showing just how weird it gets for people of color talking about their art. Caitlin FitzGerald (star of Showtime's "Masters of Sex") and Nana Mensah (star of "An African City" webseries) have made this satire to show just that. Laugh and cringe and maybe catch that contagious feeling of ... what is it? Ahhhh, empathy. 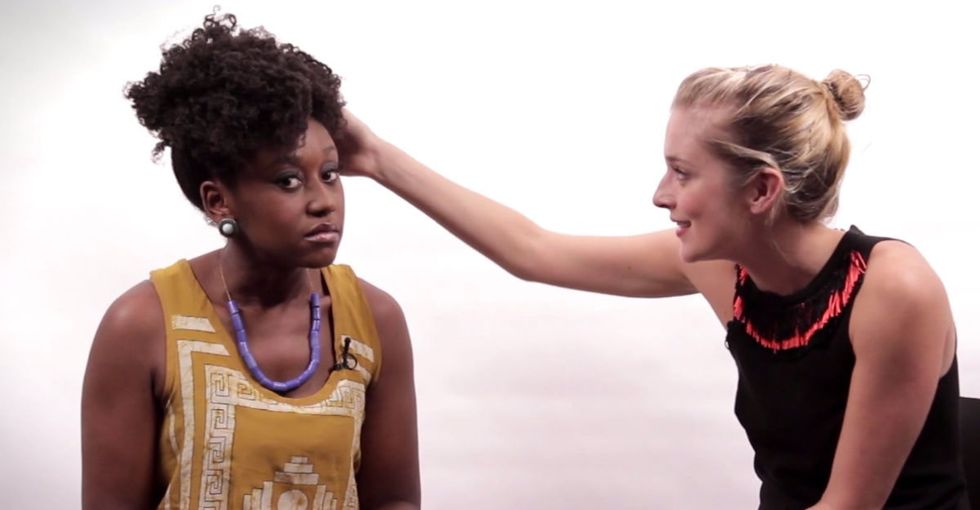 Are you ready to go from zero to Jay-Z in under a minute?

So, it gets weird out there for people of color talking about their art.

"QUIT WHINING! ALL ART IS HARD TO DO!" — a voice inside of you

Why is this something to care about? Because stereotypes. They mess with all of us. And movies help fight them, but they also help support them. What to do!?

A good place to start is to make fun of them. Mock them! Take them DOWN.

And that's what filmmaker, Nana Mensah ...

... and her friend Caitlin FitzGerald ...

... set out to do in this satirical short.

Stereotypes that Deserve to Be Mocked

2. Who are "your people" exactly? You'd better know!

3. Be prepared to speak for everyone who looks like you.

4. And get ready for random pats on the head.

5. Also, be ready to talk about your interests like they're something really deep because you're DEFYING stereotypes NOW because now that's an important thing because you've been so intensely pigeonholed, you try to talk your way out of it using random interests!!!!!

Why is it so easy to make a silly video about these things happening? Because they do happen.

And you wanna know a big reason why?

Lack of diversity in film.

So how do we change that?

It's the stereotypes that cause the reactions they're satirizing in the vid. Stereotypes are the enemy here.

Sure, ridding the world of stereotypes is not as easy as a jazzy Paul Rudd karate chop, but it *is* as easy as paying attention and getting to know each other.

Then before we know it ... we think differently.

And frankly, the more you see of other types of people (like IN MOVIES!), the more likely you are to be chill and accepting of other people. That means the same for your kids! For you!

Pretty soon, we look at people who don't LOOK like us and instead of seeing the stereotype, we see ourselves.

And it looks pretty cool.

How to begin? Laugh those stereotypes right off of our screens (and out of our lives):

We'll just be over here, being chill and accepting.