We couldn't prove that women are good at math. Here's why that's OK.

Turns out we were asking the wrong question. 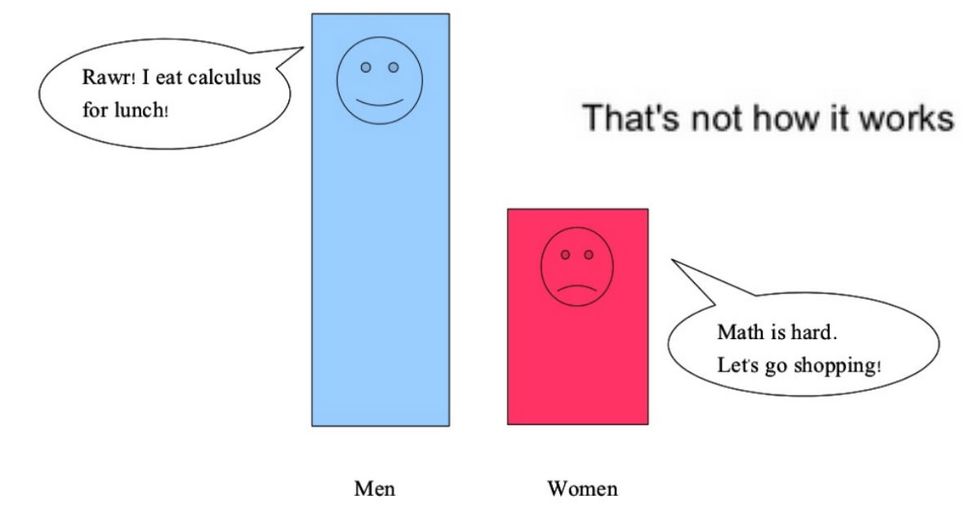 Many people think men are better than women at math. Computer science researcher and feminist Terri Oda has suggested graphically that this is what people think the male-female math ability scale looks like:

Well, I'm a woman, so I wanted to test this theory.

So I corralled my coworker Eric.

And we both just tried to solve this math problem:

We both got it wrong. Miserably wrong.

If you follow the logic of that blue and pink chart up there, Eric should've gotten it right. He's a man, after all. Grrrr. Sports. Beef jerky.

But that chart is also super wrong. Miserably wrong.

What does the correct chart look like? Terri shows us.

This chart reflects a study that shows both men and women are about equal in skill when it comes to math. And both are, well, equally as bad.

And it took us both a little bit of time to understand that because we're both equally bad at reading mathy charts. But we figured that it meant if women aren't good at math, men aren't either.

So the question is if men and women are both equally bad at math, then why are men doing so much of it?

Because our brains, which we have proven are bad at logical reasoning, think like this:

The problem isn't how we do math, it's how society has made us think about math.

A male who's bad at math? An exception to the rule. A woman bad at math? Well what do you expect?! This way of thinking is wrong. It discourages girls from pursuing mathier futures, and it makes boys who struggle with math feel like very exceptional weirdos. That's not good for anyone.

Everyone — men and women alike — have the potential to get good at math. After we all agree on that, push our sexist lens to the side, and create our own math-judgment-free zone, the possibilities open WAY up.

Because here's the fun:

You know, in those mathy fields that are usually overwhelmingly male? If society and our silly notions about math and gender would get out of the way, I bet even more women would be in STEM careers making mic-dropping slides like this from Terri Oda:

Equality is a beautiful thing.