Watch this gorilla use sign language to warn humans about their impact on the earth. 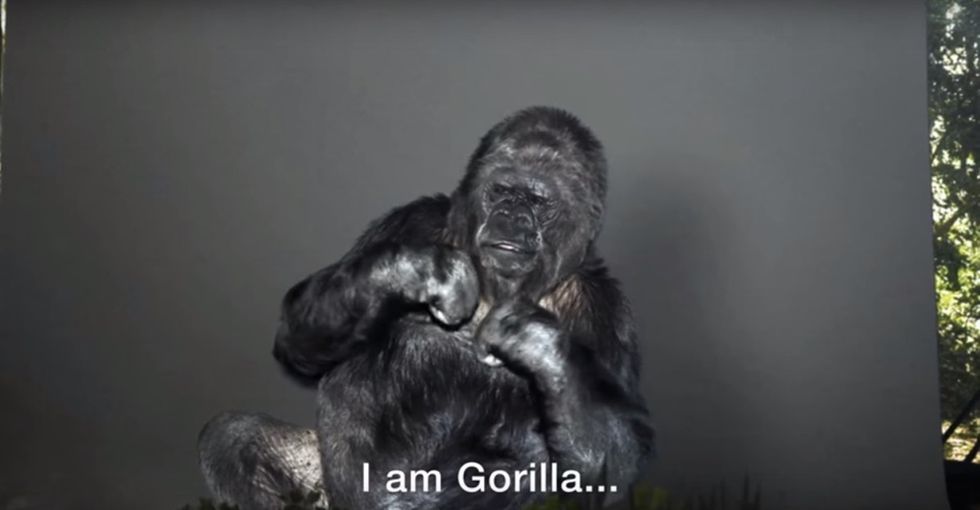 You remember Koko the gorilla, right?

Koko was born in the '70s at the San Francisco Zoo. Francine (Penny) Patterson, then a Ph.D. candidate at Stanford, started studying young Koko's linguistics capabilities and eventually taught her a rudimentary version of sign language.

Over the years, Koko has become a gorilla celebrity and spokes-ape for global conservation efforts. She adopted a kitten (several, actually), helped sell an award-winning children's book, befriended a ton of celebrities, and Dr. Patterson went on to start the Gorilla Foundation.

At 44 years old, Koko is still thriving. And spokes-ape-ing.

In this video compilation created by Noé Conservation and produced for the 2015 COP21 climate change meeting outside Paris, Koko is shown signing directly to the public. (Note: Koko was coached for this and followed a script, and the video is heavily edited to portray her as able to comprehend these issues. While she may be extraordinarily intelligent and talented, gorillas do not understand environmentalism.)

In the video, Koko tells us she loves people, and she loves the Earth.

All GIFs via Noé ONG/YouTube.

But then the tone of her message changes.

But, Koko! I thought we were friends...

And Koko ends her message with a gorilla-sized request.

Here is this gorilla — kind, tender, and clearly intelligent — asking not just her handlers, but all of us to clean up our act. Whether it's protecting biodiversity (like rare gorilla species), stopping poachers, limiting deforestation, or any of the myriad of issues gorillas and other endangered species face.

Koko would do it herself, but she can't ... at least not until the (increasingly likely) gorilla uprising happens. So, for now, she's doing what good friends (human and gorilla alike) do best: Call each other out on their b.s.

196 nations adopted an agreement that set the ambitious goal of curbing the world's rise in average temperature to below 2 degrees Celsius. Since studies show we may already be halfway there, this agreement couldn't have come at a better time.

Each country's government still needs to seal the deal. But if they don't, they'll have to deal with millions of angry citizens, and one gorilla who's had it up to here with their inaction.

What's the sign for, "Finish the job or sleep with one eye open, world leaders?"

Got a minute? Watch Koko's message in its entirety.