This viral video is the universal dose of baby joy magic we all need right now. 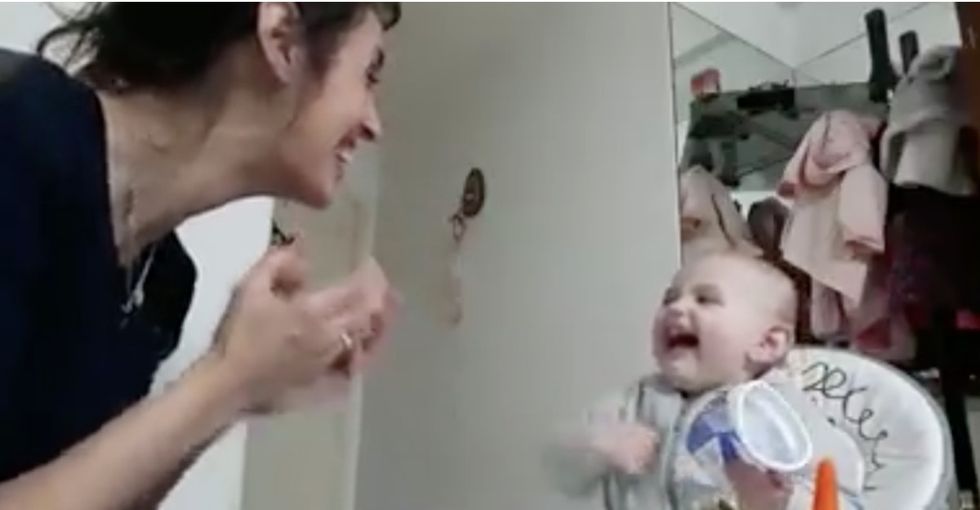 There's nothing like an adorable baby to make us forget all our woes—even just momentarily.

It's a simple video—just a mom and a baby sitting at a table having a chat about dinner. The mom is speaking to her daughter, Angelina, in Spanish (an Argentinian dialect, according to my South American friends), and Angelina responds in the universal language of baby babble.

Angelina appears to be about a year old, at least physically. But her hand gestures and voice inflections as she "argues" with her mama about the foods she will and will not eat make her seem so much older, and the effect is just too freaking adorable.

You don't have to understand a word of Spanish to enjoy every bit of it.

The video has been viewed almost 9 million times on Facebook by people around the globe. I've watched it myself half a dozen times, and it's nothing but joy every time. From Angelina waving her hand to her tilting her head and smiling when she notices the camera, it's nonstop cuteness.

I don't speak a lick of Spanish, but it doesn't matter. Baby awesomeness is universal. In fact, this video almost makes me want to have another one. (Calm down, ovaries. I said almost.)

The best part is how Angelina's mama talks like her daughter understands everything she's saying and can respond in kind. Chances are, Angelina does actually understand; she just doesn't have the verbal ability to converse in full sentences (or even more coherent words than BA-NA-NA). But her body language and intonation are spot on, which makes for a hilarious "conversation."

No matter how ugly the world gets or how society seems to be spiraling, babies remind us of humanity's potential.

My mom tells a story of a La Leche League conference she went to decades ago where a speaker told the audience that if we really want to end war we should put all the world's leaders together in a room together with a 5-month-old baby sitting in front of each of them.

It's hard to resist the wonder and charm of a new human, and the instinct to protect them from harm is palpable. If a precious baby doesn't motivate you to want to make the world a better place, you need to get your cold, dead heart to therapy (or at least watch "How the Grinch Stole Christmas" a few more times).

Thank you, Angelina and Angelina's mama for bringing such simple, unbridled joy into our day. We needed it.