This professional football team is challenging assumptions about women in sports. 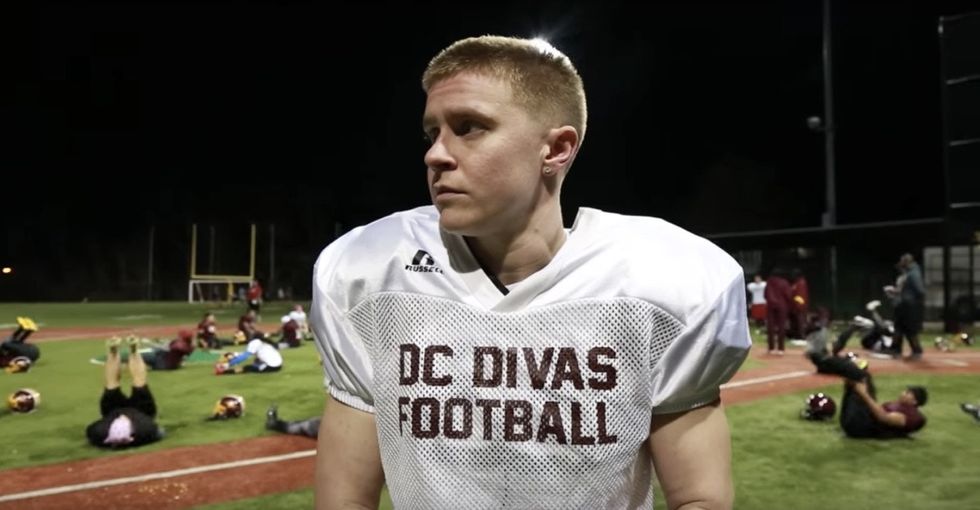 It may be spring, but there's one football league already back on the gridiron.

The teams are athletic.

All images and GIFs via Upworthy/YouTube.

The runs are epic.

And the players are women.

Don't worry, that's a look Callie Brownson is all too familiar with.

It's the face she gets when she tells people she plays women's professional football. Most people don't expect it, but Callie and her teammates hope to change that.

Callie Brownson gets ready to take the field.

Callie is a wide receiver for the D.C. Divas, a team in the Women's Football Alliance.

The professional league includes 45 teams, divided into two conferences and four divisions, similar to the NFL. The teams play an eight-game season, followed by intense conference playoffs and a national championship.

Despite their prowess on the field, some people still have their doubts.

A women's football league challenges many outdated notions of femininity, athleticism, and strength. No matter how popular women's sports get, the athletes remain hyper-sexualized and undercut at every turn — like this piece last year from FIFA about soccer forward and children's book author Alex Morgan, calling her "a talented goalscorer with a style that is very easy on the eye and good looks to match."

The athletes in the Women's Football Alliance are playing a game they love, and they compete with ferocity. The blocks are hard and loud, the passes are on point, the games are just as competitive and fast-paced as any other semi-pro league, and none of the women have time for your hangups.

Or as Callie put it:

She doesn't let that stop her. It only drives her to play harder.

Because it's not just about her. It's about the kids who see Callie and her teammates as role models.

The next generation of athletes — maybe even football players — watch the D.C. Divas' every move on and off the field. It's a responsibility the players don't take lightly.

A future Diva keeps an eye on practice.

You can join the good fight by checking out a women's football game (or any women's sport, for that matter) in your area.

Bring your family, go with friends, and make a day of it. Just take some time to support the athletes and competitors who don't always get the accolades or attention they deserve. Your presence and your ticket dollars can go a long way toward keeping opportunities like this around for years to come.

Watch Callie tell her story and see the D.C. Divas in action in this Upworthy Original video.