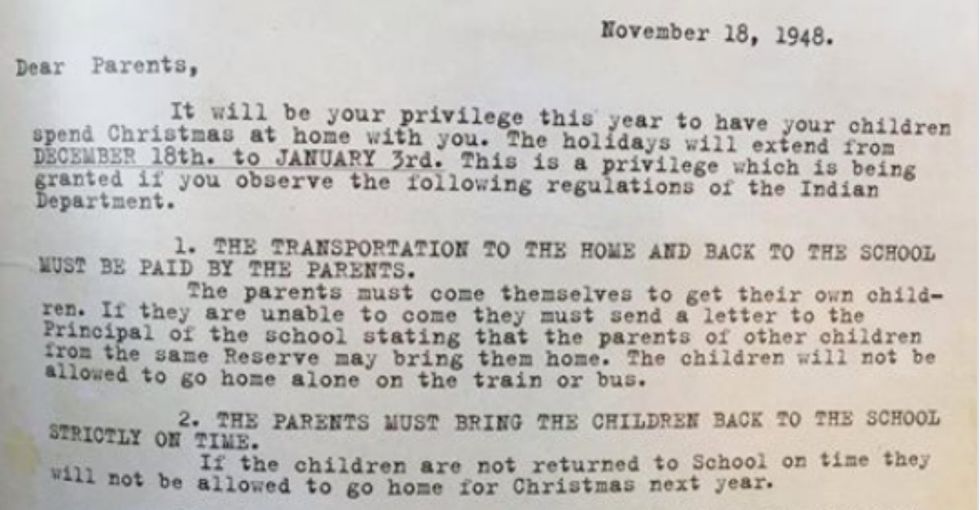 It’s a chapter of U.S. and Canadian history that many prefer to forget—and that many of us never even learned.

Either absent from many textbooks or given a mere nod in a sentence or two, the forcible, systematic removal of Native children from their families is one of the most shameful episodes in our history. Starting in the 19th century and continuing through the majority of the 20th, both the U.S. and Canadian governments created boarding schools, or residential schools, in which Native children were forced to “assimilate.”

What “assimilate” meant could be summed up in the words of U.S. cavalry captain Richard Henry Pratt, who opened the first Indian boarding school in Carlisle, Pennsylvania: “Kill the Indian in him, and save the man.”

Children were taken from their families to live at these schools, forced to speak English and practice Christianity, and punished for speaking their own languages or practicing their own customs. For decades, tens of thousands of Native children endured the cultural genocide the schools were designed to carry out, in addition to the emotional, physical, and sexual abuses that turned out to be all too common in such schools.

Some may think this is ancient history. But it wasn’t until the Indian Child Welfare Act passed in 1978 that Native parents in the U.S. gained the legal right to keep their own children from these schools. That's right. 1978.

A Christmas letter to Indian parents from a Canadian residential school highlights the arrogant racism inherent in the system.

Imagine someone stealing your children so they can indoctrinate and abuse them until everything you and your family has taught them is destroyed. Then imagine getting this letter from them in the mail:

Can you imagine? Some of our Parents, Grandparents, Uncles, Aunts, Cousins, Brothers, Sisters went through this...

It will be your privilege this year to have your children spend Christmas at home with you. The holidays will extend from DECEMBER 18th to JANUARY 3rd. This is a privilege which is being granted if you observe the following regulations of the Indian Department.

Imagine having your kids forcibly taken from you, then being told that seeing them for the holidays was “a privilege.”

The reverend used the word "privilege" three times to describe parents simply getting to see their own children at their own expense. He threatens to hold their children hostage next Christmas if they don't return them on time. Then he repeatedly tells them what "a joy" it will be for them to get to see each other, as if he's issuing some kind of happiness edict. Gross.

Add in the fact that many of the Native parents receiving this letter didn't speak or read English, nor did they celebrate Christmas, and the arrogance and condescension in the letter grow even greater.

In fact, the whole thing reads like something President Snow in "The Hunger Games" would write. How nauseating is it to realize that the dystopian stories we eagerly consume as entertainment have been the lived reality of thousands of Native and First Nations people for so much of our history?

And again, this is modern history. My mom was a child when this letter was written, and I was born before Native parents in my own country had the legal right to say no to the government stealing their children. There are thousands of people living with the aftermath of these policies and practices, right here, right now.

Let's add this to the list of human atrocities we vow to #NeverForget.