This awesome band is creating inclusive concert spaces for Muslims and other music fans. 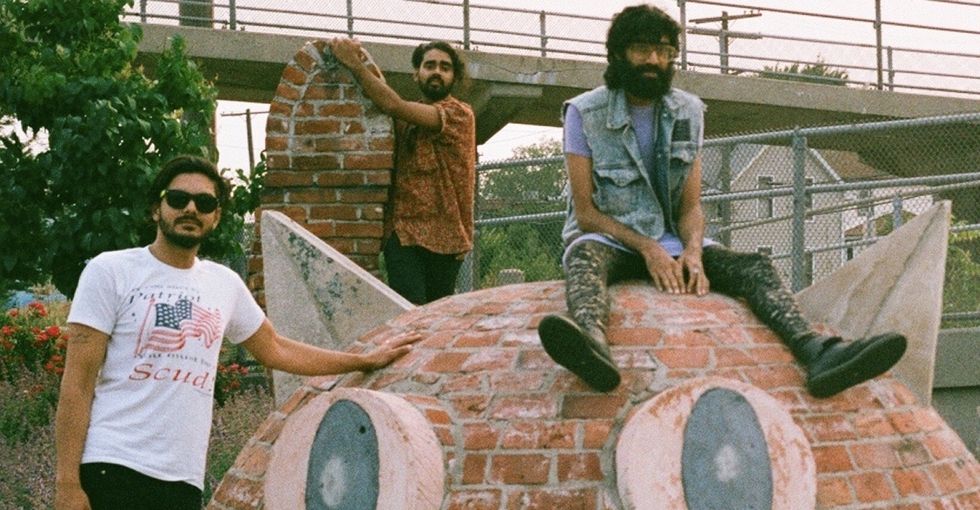 After more than a decade of performing, the Kominas were getting tired.

They weren't tired of playing music, though — that remained the best part of their days. Instead, the punk rock band was exhausted by always having to explain, identify, and defend themselves as Americans of South Asian descent in a mostly white punk rock scene.

"In our early days, we definitely coexisted with a lot of local, very white punk bands. But even then, I felt like we were some kind of fetish," said guitarist Shahjehan Khan, in a band interview with Spencer Shannon. According to Khan, even bands that they were friends with still couldn't tell the members of the Kominas apart sometimes.

They released a new record in 2015, appropriately titled "Stereotype," and they wanted to go on tour to promote it. But as brown-skinned dudes in America, they didn't feel very safe.

Somehow, things for South Asian Americans — including Pakistanis, Muslims, Sikhs, and many other groups — were looking even worse than when the band first formed a few years after 9/11.

"The climate in America right now, with all the shit going on politically and with the election ... every day is like there’s new shit happening and it’s so hard to keep up. You get kind of numb to it and not really dealing with it," said guitarist/vocalist Sunny Ali.

"But our shows have been getting more and more [people-of-color] majority ... and it’s just cool to have a place that everybody can get together in that way, and just potentially be like moshing with each other, then picking each other up if someone fell," he added. "Even just physically being that close to like-minded people can be therapeutic."

In the summer of 2016, the band decided to pack up their gear and embark on a "Rock Therapy" tour across the United States.

They'd play music on the tour, of course. The 10,000-mile, monthlong tour would take them to 20 cities, from Cambridge, Massachusetts, to Houston, to Olympia, Washington. But most importantly, it would be all about inclusiveness.

This trek might sound scary at a time when the cringeworthy xenophobia of "Ban Muslims!" is so central to the zeitgeist. But that's why the Kominas are making an effort to perform at inclusive cultural centers and music venues with other like-minded artists and musicians.

"It’s not just a rock therapy tour. It’s like a 'Magic School Bus' education," explained vocalist/bassist Basim Usmani. "It's us going through the USA and saying, 'What is this place?' Then being able to look around and say, 'Honey, you’re home' and ... get that positive feeling of, 'Yeah, I was born in this country, and I love it.'"

Their tour kicked off at the Lilypad in Cambridge in July.

100 eager fans crammed into the small gallery space that night. Gutter punks and hipsters danced alongside dolled-up young professionals. There were even a few older parents who showed up ready to rock. Most of the crowd had brown skin, and some wore dastaars or kameez or saris. At one point in the evening, the audience let out a collective chuckle when the opening band's Bengali-American singer joked that the drummer could pronounce Sanskrit better than she could.

The show was easily one of the warmest and most inviting rock 'n' roll shows I'd ever been a part of, and I was immediately struck by the bonds that were apparent even between strangers — just because they all felt comfortable in the space.

One fan, Sara Hussain, said she felt right at home watching the Kominas. "I'm a South Asian girl, and it’s the first time I’ve seen artists that have made their name that are South Asian artists," she told Upworthy. "They wear our clothing, they say the words that we understand, they share our languages. That’s how we connect to them. You really can’t see yourself represented in the world unless you actually see yourself up there, or people like you, right?"

Every band that played that night had some kind of South Asian influence bleeding through their sound. But at the same time, the bands were just your average American indie rock bands, too.

"Rock Therapy might be kind of healing those wounds that are created by people who are prejudiced against those Pakistani Americans or Muslim Americans or Desi," said Levi Ali, a musician and longtime Kominas fan who was in the audience that night, in an interview with Upworthy. "You have to go and support everyone who’s doing that because that’s how you start a movement. ... It’s showing that we are something in this country, we’re here too, and we’re doing cool stuff."

"When you try to represent your culture which is largely ignored, any kind of symbol becomes huge."

All too often, minorities in America are saddled with the responsibility of being the spokespeople for their entire group.

There is obviously a vibrant South Asian rock music community in America, as evidenced by the Kominas tour. But even in the earliest days of their success, they were forced to act both in press and at concerts as some kind of monolithic archetypal stand-in for all South Asian Americans who like rock music, which has been incredibly difficult.

"A large portion of our fanbase is people of color," drummer Karna Ray explained to Shannon. "Hopefully with this [new tour], we can create small spaces where people are alleviated of having that responsibility" of always having to explain and identify themselves.

Case in point: The Kominas are frequently referred to as a "Muslim punk band" even though they're not all Muslim.

But they are all Americans.

Sure, they embrace and poke fun at their experiences as South Asian Americans in songs like "See Something, Say Something," the "Friends"-inspired "4 White Guys," and "Sharia Law in the USA." But it's not the only thing that defines them.

"Our songs critique the world around us, but a lot of people can read whatever paternal, like, 'They’re trying to reform their savage culture!' bullcrap they want," said Usmani. "That makes what we’re doing feel really gross. We’re not, like, 'one of the good ones.'"

"It’s difficult because a lot of other bands, they’re just going through it. They’re not even saddled with an identity," he added. "No one’s like, 'Wow, a white band’s playing tonight!'"

That's why it's so important that bands like the Kominas are using the power of community to create safe spaces for all types of Americans.

If you ask the Kominas directly about what they want audiences to take away from their music and performances, they probably won't talk to you about inclusiveness alone. No, instead they'd all tell you the exact same thing in unison: "Buy our T-shirts!"

It's a silly and moving reminder that they're still just another great American rock 'n' roll band trying to make a living by doing what they love — even if that does involve a little rock therapy.

But tours like these still make a huge difference for South Asian Americans in particular, especially at a time when many of them could use the support. But that doesn't mean the rest of us are left out of the fun, either — we can all listen to their music and enjoy their shows (and, yes, laugh at their hilarious music videos), while also reminding ourselves that America's strength lies in diversity, not exclusion.