Feelings: Everybody has 'em. Even superheroes. 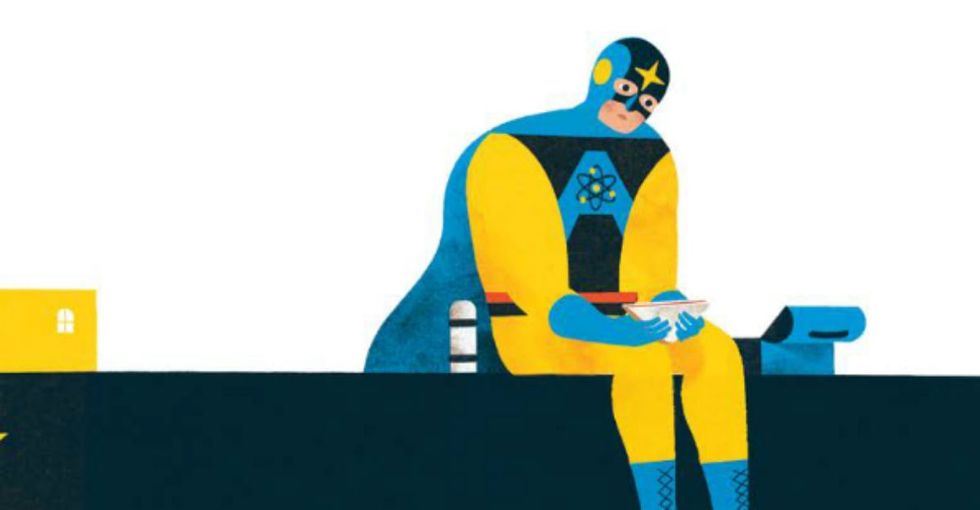 As his young son grew older, a deep-rooted concern began nagging at Keith Negley — an anxiety many parents can probably relate to.

When something would embarrass or upset Negley's son, Parker — on the playground or the soccer field, for instance — Parker would grapple with how to show his feelings.

Sometimes, his emotions would manifest as anger or hostility. Other times, "he'd just shut down altogether," Negley explained to Upworthy.

This was troubling because — coming from a long line of "emotionally repressed" men himself — Negley understood that bottling up your feelings won't do any good.

He decided to poke around a bit to see if there were any books out there to show his son that it's totally normal to feel sad or upset or disappointed at times.

As Negley looked around, he saw no shortage of triumphant books about spacemen, tales of fearless ninjas, and stories about cowboys who saved the day.

But Negley, an award-winning editorial and children's book illustrator, couldn't find too many options that explored what these heroic characters must feel when things don't go their way.

All images via "Tough Guys (Have Feelings Too)" and Flying Eye Books, used with permission.

So Negley decided to create his own.

"Tough Guys (Have Feelings Too)" is a kids' book aimed at teaching boys that it's perfectly OK (and healthy!) to express their emotions.

The book features a wide range of larger-than-life male characters experiencing things we don't often see. Like a pirate, who is frustrated he can't find his treasure.

Or a race car driver, crying after he fails to finish first.

There's even a superhero who's super lonely eating lunch without his friends.

By teaching boys that it's OK to express their emotions, then "they're going to grow up having much deeper relationships," Negley hopes.

And that's true for kids and astronauts who miss their families from afar.

"Tough Guys (Have Feelings Too)" might only feature fellas, but that's just the focus of this particular book — it's not a knock on all the tough girls out there.

As a big believer in combating gender roles in children's literature, Negley said he contemplated featuring some tough women as characters. But at the end of the day, he didn't want to dilute the book's underlying message of showing boys it's OK to get the feels sometimes.

Seeing as research suggests we could be doing a whole lot better at getting this idea across to young males, it's definitely a goal worth pursuing.

Besides, “moms and daughters can read this book and get a lot out of it" too, Negley noted.

But it's all the sons and fathers out there who were really the inspiration behind his work.

"This book is just as much for the dads as it is for their boys," Negley said. "The idea of a dad reading this book to their son is really important to me."

Because sometimes the toughest thing any one of us can do — kids and grown-ups alike — is be OK with shedding a brave tear.