They Finally Did It. Some Women Had Enough Of Creepy Men's Crap And Documented Their Experiences.

If you've ever endured standing in line waiting to pay for your Chinese food while trying desperately not to make eye contact with the dude aggressively staring you down with all the confidence of knowing there's nothing you can do about it (like I had to last week), you'll understand what I mean. Leah Beckmann and Mark Lotto from Matter gave us their blessing to republish this eye-opening breakdown of street harassment documented by women the world over. Each brand of harassment listed is completely unacceptable. 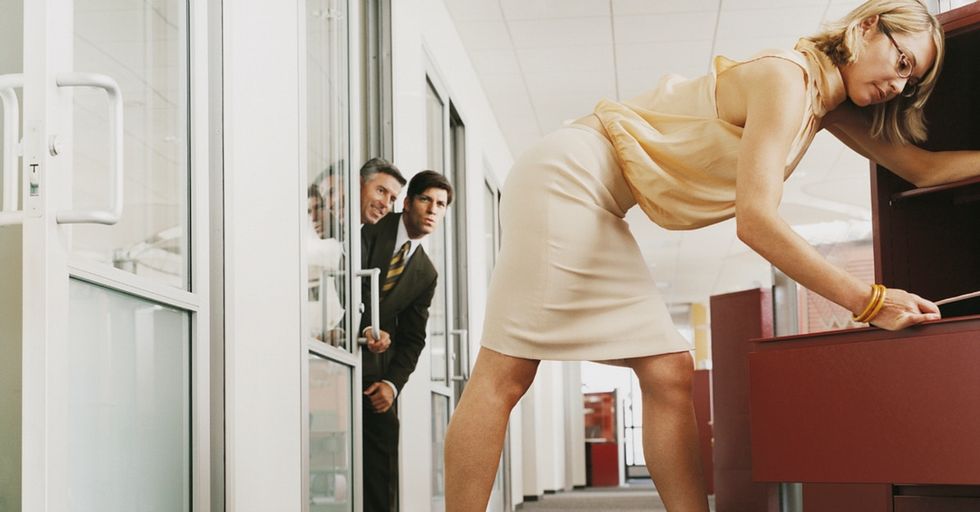 We asked 10 women in nine countries to record every instance of street harassment—every catcall, every ass-ogle, every creepy look—for an entire week. The results? A strong argument for just becoming a shut-in.

Catcalling—a cute name that uses the image of a soft mammal on a telephone to stand in for some super rude behavior—is something women experience everywhere, in every city and country, all the time.

Some women think it’s a compliment; that a stroll down Confidence Avenue is not only healthy, but that hearing the opinions of male strangers, usually shouted from streetcorners or a moving car—Can’t stop! Too many other girls to catcall!—is “validating.” This is…a questionable argument to make. For most of us, catcalling is mortifying at best; at worst, it makes you want to pull out someone’s eyeballs with your bare hands.

For one full week in September, we asked women from 10 different cities around the globe to keep a diary record of any kind of unwanted attention they received, including every untoward advance from a stranger, every leering stare and smile and “Hey baby” directed their way.

Here’s what we learned:

Based on the individual experiences of these 10 women, Mexico City was the worst of the group—with 29 catcalls in a single week. San Francisco and Nairobi were basically tied for second, with 17 and 16 respectively. Tel Aviv and Occidental College in L.A. had the least, with only two. (For our college correspondent, both of those happened off campus, so you could count Occidental as zero.)

Italy wins for Most True To Its Cultural Stereotype. Short of screaming out, “Mama mia, when the moon hits your eye I’m a pepperoni pizza,” the men of Rome, Sicily, and Le Cinque Terre couldn’t have been more on the nose if they tried. A sample from our Italy correspondent:

As soon as I got off the plane in Sicily’s Cantania airport, I dragged myself to the first coffee shop in sight, half-asleep. The young waiter — a slender young man, aged between 25 and 30, with blond hair and blue eyes, wearing his black uniform as a waiter at a coffee bar — had a welcoming smile for all clients who were having their croissants and cappuccinos. He took my order, served me my double espresso and croissant, and moved on to the German woman standing next to me. “Could you possibly have a prosciutto sandwich before 9am?” he asked me in Italian, knowing the German lady wouldn’t probably understand. I lifted my eyes up from my espresso and he muttered, “Are you an American movie star?” I must have looked perplexed. “OK, maybe not. I just meant to say that we could turn off the lights here, now that you and your eyes walked in.” Buongiorno, Sicily!

There are two kinds of catcallers in this world. Those who are annoying as hell but feign politeness:

And those who are annoying as hell but have adopted an IDGAF attitude toward politeness:

In Mexico City, our correspondent encountered behavior so aggressive, she began to wonder what she had with her that would work as a weapon.

“I was walking faster now, and started thinking about what I could use to hit him if I had to, and I thought about using a water bottle if he came too close.”

And when she called police:

“These were the two cops I’d called, one female and one male. They were talking to me about my complaint, but kept staring at my hip tattoos. I pulled up my pants but they still kept trying to see them.”—Debora Poo Soto, Mexico City

Women almost always experienced catcalls when they were alone.

Men, on the other hand, often catcall when they are with other men. They do it a lot when they’re alone too. Men catcall all the time, constantly, always. Men, you are never not catcalling. Women’s sole purpose in this world is being a thing at which you can catcall.


And now a scene from Singapore, and also every other place in the world:

Man, violating the laws of physics, already at the next table of women: Hey girl. Can I buy you a drink?

Several of the cities found that catcallers are very preoccupied with the smiles of the women around them. The most common catcall our contributors experienced was some variation of, “Can I get a smile?” or “Hey girl, did you forget how to smile?”

Kati Krause, Berlin’s correspondent: “Sexism is much more insidious here (so much so that I sometimes miss the more overt type in Spain).” From her diary:

“Two sleazy-looking middle-aged men in suits were smoking outside the opening of a cinema-turned-art space and shooting looks at the young women around them. ‘You can forget about the art, but the in-crowd, the in-crowd is here,’ one of them said.”

Catcalling usually occurred while women were commuting, probably because this is the time when women are most often alone. It is also one of the many times of day when there are men.

Catcalling doesn’t always happen on street corners and from moving cars; it happens up close, in, for instance, grocery store checkout lines.

“The man in line behind me belched a hot stench of vodka’ed breath in my direction. The hairs on the back of my neck stand on end.” — Anonymous, Ulan Bator, Mongolia

…which is an incredibly offensive insult in Swahili. It is best translated as, “Come and sell sex for us.”

Men often—like, often—stare at women’s boobs and butts and the rest of their bodies. One of the most common “themes” of the diaries was an intense Leg Stare our contributors received when walking. There were 7 total incidences involving legs—in New York, San Francisco, Nairobi, and Ulan Bator, Mongolia—along with the comment, “You have beautiful legs, eyes…”

It’s not just the construction worker cliches that apply. Here’s Sarah Emerson, from New York, on a Monday morning encounter in a Whole Foods:

I was standing in line to pay for my lunch at Whole Foods, chatting with a coworker. Clutching my shitty array of terrible salad bar items, I noticed that a guy in the neighboring check-out lane seemed to creepily catch my glance every time I looked in his general direction.

He was older, maybe in his forties, and sported a sleek man-bun. Holding onto a container of sushi and a bottle of kombucha, he gave me an obvious once-over. Ugh.

There’s a feeling you get in your gut when you realize you’re being leered at by a strange man. Imagine someone running their hands along your body without your consent. The reaction is like an urge to puke coupled with a strong desire to rip their eyeballs out. Yeah, that sounds dramatic and violent (Scout’s Honor, I have never ripped anyone’s eyeballs out), but unwelcome looks can be just as violating as other forms of sexual harassment.

It’s difficult to reject an obscene glance. It’s embarrassing to say “stop looking at me.” It’s impossible to prevent someone from eye-fucking you.

Short of stealing my food, there was nothing I could do to evade his gaze, so I waited in line until it was over.

However, all of the cliches also apply:

Catcallers are everywhere. Even in your church in Nairobi. Blessings.

So: What does this all mean? It means that we should take a good hard look at the world around us. I mean physically, right now, take your eyes and peer into that bush over there. Is there a man in it? Because here is one thing we know for sure: No matter where we are in this big wide world of ours, wherever there is a woman walking to work, or buying her high heels and tampons at a grocery store, or loudly singing to a Taylor Swift song in her Jetta, or standing, literally just standing anywhere on terra firma, there you will find a pervy man demanding proof that this lady remembers how to smile.

Please read the full diaries. (Really, do it. They’re great.):