These photos were taken at just the right moment. And the results are stunning. 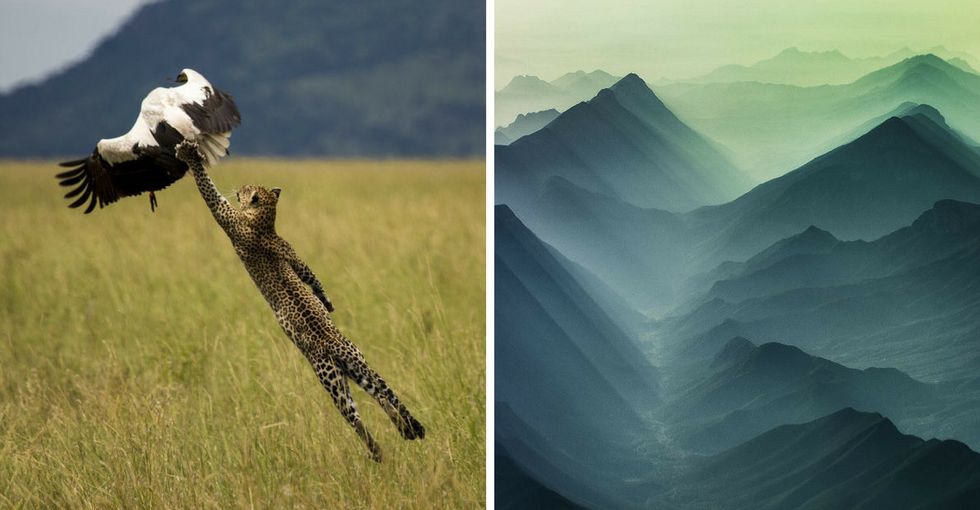 Most times, our cameras miss the glorious moments brought to us by Mother Earth.

The rainbow fades behind the trees before we can find our phones. The buck strutting through the backyard gets spooked and darts off. That incredible magenta sun disappears behind the horizon in the blink of an eye.

Other times, though, we're lucky enough to capture the magic through our lens — and the photographic evidence is worth more than a thousand words.

National Geographic has shared a handful of stunning shots submitted in the Nature category of its 2018 Travel Photographer of the Year contest. Many of the pics — revealing breathtaking landscapes and gorgeous creatures —  reveal why timing truly is everything when it comes to photography.

1. Like when this polar bear cub glanced over at just the right time while trailing his mama along the ice sheets.

"We spotted this mama and her two cubs swimming along the ice sheets in search of food."

2. Or when this stork moved a tad too slowly and ... whoops.

"One shot capture. I watched the leopard stalking the stork. I only had time to focus at 400mm — no time to change to high speed. I watched the stork and as soon as it flapped its wings, I shot one shot."

3. This otherworldly sunrise in the Andes may never be captured again, according to the photog.

"After this shot, I have been traveling the same route several times. I [never saw] the landscape I saw when I shot this picture again. That morning, the light and shadows over the Coordillera were just perfect. The moment I had to shoot this series will remain in my memory as a special gift from nature."

4. And this lizard peeking out from a leaf to say hello certainly isn't something most people see every day.

"A lizard hiding behind a large leaf."

5. These crocs must have listened to Beyoncé. Because they got in formation at precisely the right time.

"When we arrived at the Rio Tarcoles in Costa Rica and I saw what a fantastic formation the sharp-mouthed crocodiles [were in], I could not help myself. I started my drone and begun to photograph them from the air. My heart was beating like crazy because I was incredibly excited. On the one hand, I was a bit scared for the drone, on the other hand I was so happy about the unique moment."

6. These gray clouds were giving way to the green of Italy's mountaintops right as the camera clicked.

"Sea of Clouds." Photo and caption by Guillaume Flandre/National Geographic Travel Photographer of the Year Contest.

"Hiking in South Tyrol is a one-of-a-kind experience. It was the first time I was walking so close to the edge of a mountain, almost surrounded by clouds. Nature's power in these situations remind us that we're only guests on this planet."

7.  And this tired giraffe basically side-eyed the photographer for interrupting its R&R hour. (Can you blame them?)

"Upon leaving Ngorongoro Crater [and heading] towards the Serengeti, we came across a hillside full of giraffes. After a little coaxing by me, our driver guide, 'James Bond,' took us off-road and drove us right to them. I had always heard that giraffes don't sit, so this photo debunks that myth."

Are you experiencing some serious wanderlust right now?

Even if we can't drop everything and hike an Italian mountain, book an African safari, or go swim among the bears, we can check our weather apps, grab our cameras (or don't!), and take a day trip to an outdoor escape nearby. What do you say?

National Geographic's 2018 Travel Photographer of the Year contest remains open for submissions through 12 p.m. EST on May 31, 2018! The photos above are all in the Nature category, but the publication is also accepting entries for its People and Cities categories as well. The grand prize winner will receive $10,000. Learn more about the contest here.