These photos of North Carolina's '100-year flood' will stop you in your tracks. 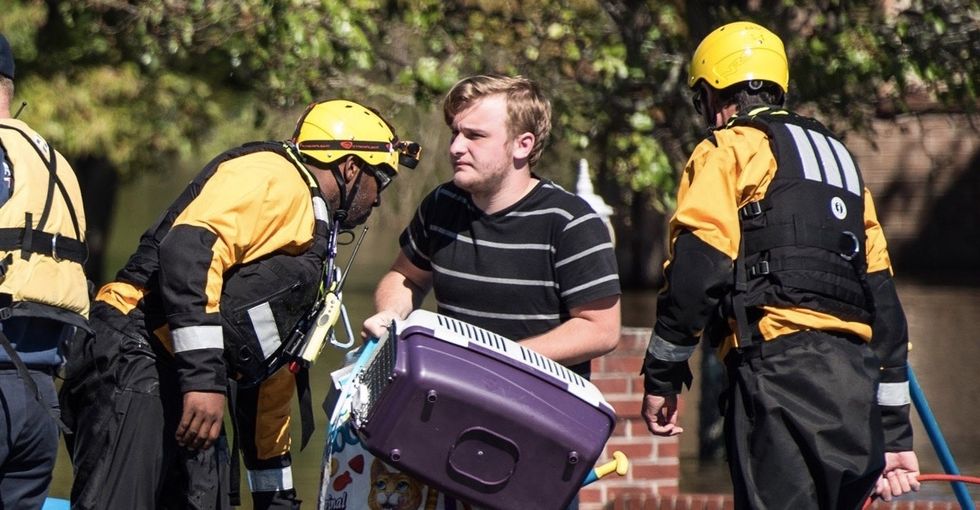 Parts of North Carolina are underwater, thanks to Hurricane Matthew.

Over the weekend, Hurricane Matthew passed the coast of North Carolina. The storm has killed at least 1,000 people in Haiti and 22 in the United States. While hurricanes can be extremely damaging to the communities they hit, even farther away their effects are felt.

In North Carolina, Hurricane Matthew dumped as much as 18 inches of rain into rivers and streams already waterlogged from heavy September rainfall. The storm has since dissipated, but communities will be dealing with its effects for a long time.

Getty Images photographer Sean Rayford visited one community that was affected by the storm, and this is what he saw:

The town is Lumberton, North Carolina.

Lumberton is a small city of about 22,000 people in southern North Carolina. It's about 80 miles from the ocean.

The rivers in Lumberton are overflowing their banks.

Some of North Carolina's rivers are expected to reach record levels. The local Lumber River reached four feet above its previous record, and it's not expected to go down soon.

A lot of people have lost their properties altogether.

Those are cars. Photo by Sean Rayford/Getty Images.

Many major roads have been closed off as well.

Even the Interstate was closed down. Obama declared a state of emergency for the affected areas.

Meanwhile, residents have had to make do, like these folks boating over a front yard.

Lumberton isn't alone. The Guardian reported that nearly 1 million people were without power in North and South Carolina.

Boats and helicopters have been able to save a lot of people.

Rescue workers outside a house in Lumberton. Photo by Sean Rayford/Getty Images.

These rescue workers, for instance, helped get a resident and his pet to dry land.

Some people have compared it to Hurricane Floyd, which hit in 1999 and resulted in a "100-year flood."

The Guardian quoted Blake Griswold, who was watching a creek spill over its banks, as saying: "That was a 100-year flood. It's been 16 years, and we have another one."

This is important. 100-year storms might become more common in the future.

Climate change may cause storms like Matthew to become stronger and more frequent, and to come with riskier storm surges. Instead of seeing a flood or storm like this once every hundred years, we might start seeing them every 15 to 20 years instead.

This flood begs a bigger question: Are we ready for more storms like this?

We've all heard about climate change by now, so it's not like we don't know about it. But people often don't take action because we don't see how it'll benefit us; or we think that one person can't do very much; or we don't want to give up our lifestyles.

But honestly, there are a few super-easy things we can do. Most important, we can remember North Carolina this November and vote for congressional and presidential candidates who support carbon control or who will invest in infrastructure like dams and levees.

And the benefits? Well, for one, maybe we can push 100-year storms back closer to what they used to be.