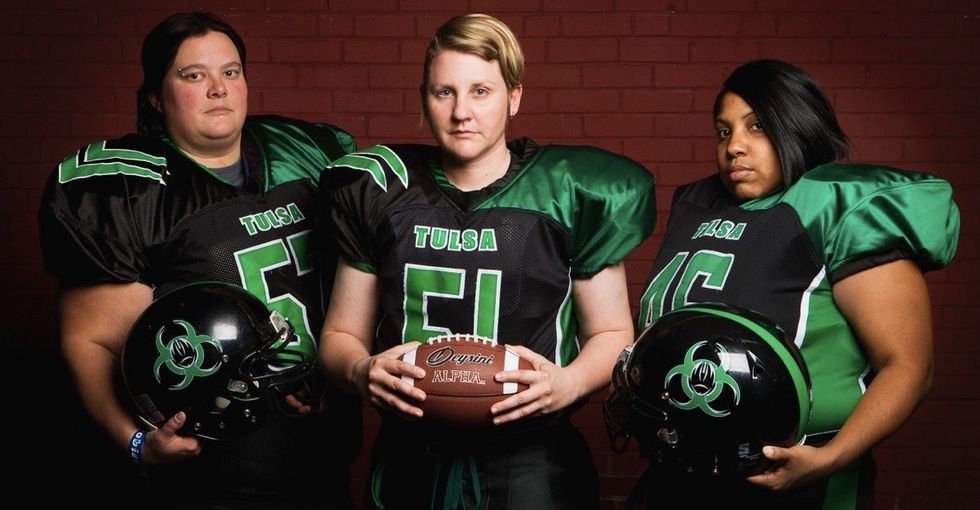 The 36-year-old specializes in criminal investigations, focusing mainly on crimes that take place in Tulsa’s biggest jail, the David L. Moss Criminal Justice Center, which she describes as "a city within itself."

To unwind from her day job, she needs hobbies: the St. Louis Cardinals, her friends and family, her Belgian Malinois, and Baxy — an old partner from when she was on the K-9 unit.

And then she has football.

Munson is a football player for the Tulsa Threat — Oklahoma's only all-women tackle football team.

Yes, it’s tackle football. No, these women do not play in their lingerie.

Munson is among the more than two dozen women ages 18 to 40 on the Tulsa Threat, which has recently joined the Independent Women’s Football League.

On the side, they — like hundreds of women across the nation — play their hearts out at the highest level of football women can play, all while virtually no one watches. This means the women often need to buy their own pads and cleats, pay their own way for travel games, and pitch in to help rent high school football fields for weekend games.

Despite the challenges, women like Munson continue to play for a number of reasons — including the example they set for the next generation.

"It’s cool to show some of the young girls that there’s something for them to play when they’re older," Munson said. "And when you put those pads on, you feel like you have a responsibility to those young girls watching."

Although they still have small followings, the fan base seems committed. According to the National Federation of State High School Associations, the number of young girls participating in high school tackle football saw about a 17% increase from 2007 to 2011, with 1,561 girls participating. While that growth rate seems to have stalled (the NFSHSA shows about the same number of female football players last year), it’s hard not to see women’s tackle football getting bigger and more popular in the coming years based on growth to date.

But at this point, there’s no real prospect to make a career out of it. So what’s the motivation?

This is why these seven women play football. (Hint: It’s not the money.)

"I started because I had friends who played, and I grew up playing soccer. I missed playing on a team, and I wanted to learn something new and challenging. They practice for hours at a time, multiple days a week. They get sore, pull muscles, tear tendons, bleed, and break bones for this game and often still have to work and live their lives.

I have the utmost respect for not only my teammates, but any woman who puts pads and a helmet on and walks out on that field to do their part to further this sport. We also get to change the way little boys and girls see women's athletics. It's a wonderful feeling and worth the risk."

"I will admit, in my first couple years, I played for myself and to fulfill my needs. But as I grew up and grew in the sport, I realized the doors that we could open for women and little girls. If I have a daughter someday, I don't want her to feel like in order to be a woman in sports, education, or in her career she has to exploit herself physically, but rather be judged by the person or athlete she truly is. Playing women's football has created that trail to blaze, where we have the opportunity to tweak society's views of a 'powerful female.' This is not a feminist movement or a 'men think they're better than women' movement — but rather an opportunity to seek equality."

Brownson, 26, is from Mount Vernon, Virginia, and has played six seasons with the D.C. Divas and one season with Team USA in Finland (which won a gold medal).

"I’ve played tackle football for 13 years. I started playing when I was in law school at Villanova, as an outlet. I continue to play to set an example for those small girls like Sam Gordon, who may one day get the chance to play in high school and college. These days I’m co-owning because I know how tough it is to provide opportunities for women. I'm lending my professional experience to help out my passion."

Brickhouse, 36, is an attorney and former athletic administrator for the Big East Conference. She is currently the COO of Boston Women’s Football, LLC, and co-owner of the Boston Renegades.

"I play football because this is what I’ve been sent to Earth to do. It is my gift, and I love doing it. I love the contact, the camaraderie, the lessons to be taught. I love everything about the game of football. How a new ball feels, the smell of autumn, which means it’s football season, the sheer fact that football is the most complete team sport on the planet. I love it all.

These days, I play for the Acadiana Zydeco in Louisiana, and my goal is to bring women’s football to the world. One day, we will pack stadiums and people will pay good money to see us play. That day will come. It is inevitable, and I will be right in the midst of it all."

Jackson, 27, is from Baton Rouge, Louisiana, and is working on a masters in business administration at Louisiana State University. She currently works as a personal trainer.

"Football is by far my favorite sport, but throughout my career, I have experienced pushback and adversity. For obvious reasons: I am female.

Constantly hearing those typical sayings: 'Girls don’t play football; it’s a man’s sport,' 'Girls are not physically capable of playing football,' 'Girls should be on the sideline in a skirt.' The criticisms go on and on.

But my women’s tackle football experience has been one of the most influential and remarkable endeavors of my life. Today, I’m surrounded by 50 empowered women, willing to sacrifice time, money, family, and jobs for the sport they love. We are making history, changing minds, and giving hope to a younger generation!"


Bushman currently plays for the Dallas Elite. She is a four-time All-American and was a member of Team USA in 2013. She is also an eighth-grade science teacher and an assistant coach for the varsity basketball team.

However, it does make me sad and a little bit discouraged that countless others and myself go out 10 Saturdays out of the year and play like there's no tomorrow only to hope and pray that someone watches."

Johns, 27, from Shelby, Mississippi, is a biological science aid for the U.S. Department of Agriculture. She lives two and a half hours away from where the Wildcats play but has said would never miss a game.

"You would never know how much fun it is getting hit or hitting somebody else until you get out there and play. There’s just something about putting on the pads, uniforms, and cleats that gets you excited. Another reason why I play is to show the boys that I can beat them playing their game. It gives me great satisfaction to beat them and gloat a little bit afterwards.

One of the biggest obstacles in women’s football is getting fans and getting our game out in public. Most people don't know that there are women teams around the country, even overseas.

I also play because I want to inspire younger girls that you can do anything you put your mind to. Don't let gender roles get in your way. Just be yourself and do what you feel in your heart. Don't let anybody tell you can't."


Collins, 26, is a detention officer and also a referee. This has been her third season with the Legacy. She also travels two and half hours from Mississippi to play in home games and go to practice.

Will the leagues catch on? It’s hard to say. But the effort matters.

In our modern world of Abby Wambachs and Ronda Rouseys, surely women’s professional tackle football playing on ESPN isn’t so difficult to imagine?

Let’s hope these women can inspire a movement, or at least open people’s minds to the idea.