I was driving through the South with my family recently, and we happened through the town of Tuskegee, Alabama. Two things popped into my mind: The Tuskegee Airmen and some experiment with syphilis. Wait, what?! Somehow, my brain was not able to sort those two very different things out, so I had to do a bit of research. What I found was bittersweet because one story is so damned horrifying and the other so inspiring. 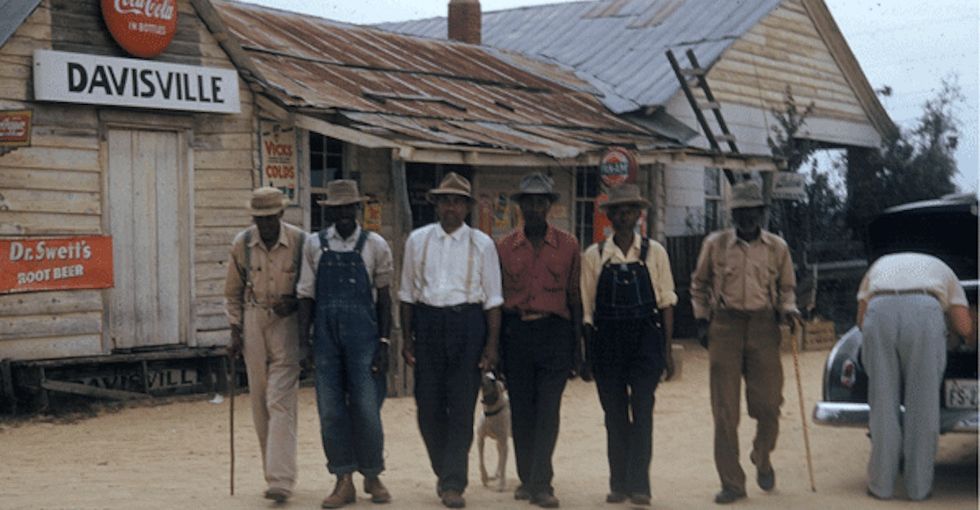 Two distinctly different social experiments happened in Tuskegee during the last century. One was the World War II Tuskegee Airmen program — African-American fighter and bomber pilots, mechanics, instructors, crew chiefs, nurses, cooks, and other support personnel for the pilots. The first of its kind, it made heroes of them in the eyes of many, including many African-Americans who at the time were largely prevented from even voting because of Jim Crow laws.

The second? A bizarre and terrifying result of people thinking that African-Americans were somehow “other" or “less than." Stretching a span of 40 years (from 1932 to 1972), it involved 600 African-American sharecroppers.

The U.S Public Health Service began the study in 1932 with the help of the Tuskegee Institute, a local college. 600 poor, largely illiterate sharecroppers were enrolled in the program, and 399 of them already had syphilis. They were given free medical care, meals, and free burial insurance for being a part of the study. But while the people studying them knew they had syphilis, the men themselves did not; they knew it as “bad blood," which could be anything from chronic fatigue-like symptoms to anemia and syphilis. It was officially dubbed "The Tuskegee Study of Untreated Syphilis in the Negro Male."

In 1947, medical researchers figured out that there was a simple cure for the disease: penicillin. However (and this is where things really went off the rails), those in charge of the study decided not to treat any of the patients, and prevented any of them from accessing other successful syphilis treatment programs in the area. This despite the fact that every major textbook at the time strongly advocated treating syphilis at any and all stages. If that had actually been the guidepost for the “research" team in charge of this study, it might have ended quickly. Instead, hundreds died painful deaths from the disease and infected spouses and children (through congenital syphilis).

Why did this study continue despite all of that? Very simple. At the time, there was a narrative among many in the white academic and medical communities about African-American people, and specifically men: that they were sexually promiscuous and reluctant to seek treatment.

Basically, the study assumed that black men would never seek treatment for the disease anyway, so it was much better to let it run its course and study them rather than offer offer a treatment like antibiotics that was widely available by the early 1950s and would have worked.

This continued throughout the 1950s and '60s. Ultimately, the study was terminated in 1972 when someone leaked it to the press. Since then, it's been known as “The Infamous Syphilis Study," and it led to rule changes for informing participants in scientific studies.

On the other end of the “Treating people like humans and equals" scale in Tuskegee was the Tuskegee Airmen.

The WWII Fighter and Bomber Squadrons

Before the Tuskegee Airmen, no African-American had been a U.S. military pilot. But in the two decades leading up to World War II, a number of groups and individuals, including the NAACP and labor union leader A. Philip Randolph pushed for legislation to fund training for African-American men to become pilots. It was successful. And though they had to work in segregated units, they formed the 99th Pursuit Squadron in 1941, later named the 332nd Fighter Group. A bomber squadron was added later, the 477th Bombardment Group. Some also served as support personnel for the units.

Because of enforced segregation, it was referred to as the Tuskegee Experiment. Pilots believed it was called an "experiment" because it was designed to fail. However, it did not.

(It's worth noting that the infamous syphilis experiment above is basically the entire first two pages of search results when you Google "Tuskegee Experiment," though that was officially referred to as a study, rather than an experiment.)

There were only 124 African-American pilots in the entire nation at the time this experiment began, so there was skepticism about getting enough pilots. Eventually, so many applied and met the stringent qualifications that over 996 airmen entered the service, as well as 10,000 support personnel. They were trained at Tuskegee Institute — ironically, the same school that was, at the same time, conducting the syphilis experiment.

Training had been going for just five months when First Lady Eleanor Roosevelt decided to drop in on March 21, 1941, and have the chief instructor, an African-American named C. Alfred "Chief" Anderson, fly her around a bit. He had been a pilot since 1929 and had trained thousands of rookie pilots. The demo flight went very well, and it got the media talking.

As training progressed and the skills became more technical, in some cases integrating the white and black pilots was the only way to train them. Out of necessity, this began to break down the segregation that the experiment began with.

The Tuskegee Airmen's main job was to fly fighter planes to accompany bomber missions and keep enemy aircraft from shooting down the much larger, more cumbersome bombers that their white colleagues flew.

The pilots did combat duty in Europe, North Africa, and the Mediterranean. In the end, the squadron was very well decorated:

The experiment dispelled a U.S. Army War College study of black troops from World War I, which concluded that black soldiers were "subservient," "mentally inferior," and "barely fit for combat."

The Tuskegee Airmen proved, to those who still doubted it, that African-Americans were every bit as capable as anybody else in getting the job done. And it gave young kids who grew up with very few choices the hope that they could aspire to greatness.

Here's a quick clip on one of the battles, as relived by a pilot who was there. If you want to see the entire 45-minute version, a link to it is below.

Now my mind is much clearer on what happened in Tuskegee. The next time we go through that part of the country, I think I'll explore some history in person.