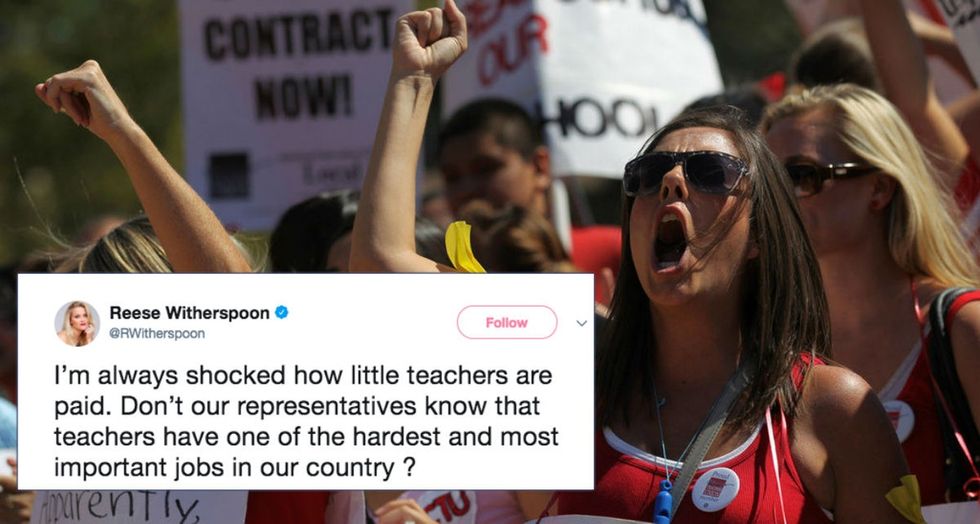 On the morning of Tuesday, Feb. 27, public schools across West Virginia were closed for the fourth consecutive day.

Nearly 20,000 classroom teachers are taking part in West Virginia's first statewide strike, affecting more than 277,000 students across all 55 counties. The strike began on Feb. 22, a day after Gov. Jim Justice approved a 2% raise for teachers.

"We certainly recognize our teachers are underpaid and this is a step in the right direction to addressing their pay issue," Justice said.

However, teachers say that gesture falls far short of expectations, and they plan to continue their strike until Justice agrees to meet with them in person.

Thousands of West Virginia teachers and school service personnel are back out at the WV Capitol on day 3 of the sta… https://t.co/PoJLYi2zce
— Jatara McGee WLWT (@Jatara McGee WLWT)1519657820.0

Teachers in the state are some of the most underpaid in America.

Only two states pay their teachers less than West Virginia. Educators there earn an average annual salary of $45,622 compared to the national average of $58,353. And the strike is about more than just pay: Teachers say they've had to rely on federal aid to cover shortages in health care and other regular expenses not covered under their current state contracts.

"There were a lot of times where we got to choose between groceries and health coverage for my family," art teacher Jacob Fertig said.

These issues have led a number of people to speak out on their behalf, including Reese Witherspoon.

I’m always shocked how little teachers are paid. Don’t our representatives know that teachers have one of the harde… https://t.co/h9cqyXk9En
— Reese Witherspoon (@Reese Witherspoon)1519666454.0

@MorriseyWV I am an intelligent, strong-willed teacher who will not be threatened by injunction from the attorney g… https://t.co/x7vaAFjBRf
— Meredith (@Meredith)1519251471.0

Critics say the strike isn't technically legal — and they actually have a point.

On the other side of the debate, West Virginia Attorney General Patrick Morrisey stirred up controversy when he wrote in a tweet that the teachers strike was "unlawful."

It turns out he has a point, technically speaking. The last time West Virginia teachers tried striking (in 1990), the state's then-Democratic attorney general ruled that it was unlawful for state employees to strike against the state, except in rare cases.

However, legal experts say the current strike isn't a crime; it's just that such actions aren't legally protected under the state's laws. That means teachers could face "disciplinary action" for their efforts if the state chooses to go that route.

The teachers strike isn't just about the money.

Like teachers everywhere, those in West Virginia do so much more than run classrooms. Nearly a quarter of all children in the state live in poverty. Before the strike officially began, teacher volunteers gathered to prepare thousands of packed lunches for students who rely on free or reduced-cost lunches for their meals.

"Before they made the decision to strike, they wanted to make sure their students' needs were taken care of," said Jennifer Wood, a spokesperson for the American Federation of Teachers union in West Virginia.

The teachers say they are striking to improve the lives of everyone in the educational system, including the students. And with teachers being asked to do more than ever, it doesn't seem like too much to meet with them and discuss how the state can ensure they have the pay and benefits they need to put food on their own dinner tables.