'We can virtually eliminate the virus any time we decide to.' Andy Slavitt explains how 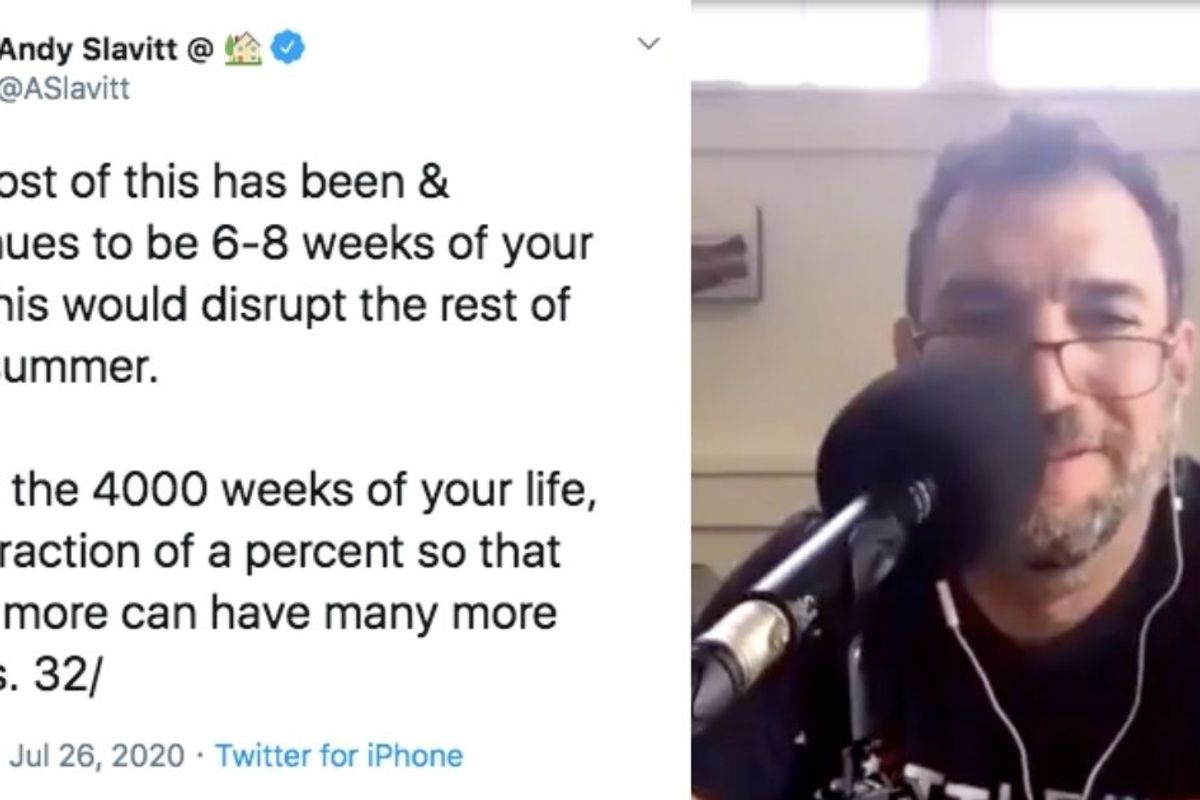 The U.S. is an outlier among developed nations in our handling of the coronavirus pandemic. While other countries have gone through rough outbreaks, none have the sustained growth in cases that the U.S. is seeing. Rather than try to control the outbreak so we can somewhat resume normal life, Americans seem to have decided to continue with normal life during a pandemic that's already killed close to 150,000 Americans and given at least a million more long-term health problems. From conspiracy theories to partisan bickering to "the gov't can't tell me what to do" individualism, the U.S. is a hot mess on the pandemic front, and the coronavirus is thriving off of our disunity.

But it doesn't have to be this way. Other countries have proven that it is possible to get a hold of this thing and keep it from running rampant. As former Acting Administrator of the Centers for Medicare and Medicaid Services and Senior Adviser to the Bipartisan Policy Center Andy Slavitt explains, we could nip the pandemic in the bud in a matter of weeks if we can just agree to do it.

"COVID Update July 26: We can virtually eliminate the virus any time we decide to. We can be back to a reasonably normal existence: schools, travel, job growth, safer nursing homes & other settings. And we could do it in a matter of weeks. If we want to."

He pointed out that New Zealand managed to completely eliminate the virus with its decisive, unified approach. And for those who would say that's easier to do on an island, he also pointed to Germany, which had an outbreak for a bit, but got it under control.

"But don't tell me the U.S. can't take action if we want to," he wrote. "And we can't face the families of 150,000 people who didn't have to die & tell them this had to happen. And I think it's why our national political leaders won't go near these families & the grieving process."

Then he offered the good news: "We are always 4-6 weeks from being able to do what countries around the world have done."

1. Start with universal mask wearing. We didn't do this in Mar-April and let's chalk it up to faulty instructions. But we know better now.

4. Prohibit travel into the country (no one will let us into their country so that shouldn't be hard).

5. Have hotels set up to allow people with symptoms to isolate from their families at no cost.

Naturally, that would mean things would be tight and tough for a few weeks. We'd need the government to help bridge the financial gap. But we could do it.

As Slavitt pointed out, "Our grandparents who lived through a decade long depression, a 6 year world war, or whatever hardship they faced in their country would tell us we would make it."

Slavitt explained how we could even form "friend & family bubbles" like the NBA has successfully done.

And because of that, the "COVID truthers would have a field day, tweeting every day the same routine" about how the lockdown wasn't working and the government is fascist and the numbers are skewed. "But if someone took Trump's phone, it would help," he added.

This is the exponential math that is a hallmark of epidemiology. The idea isn't to get to zero, but to get cases down low enough to be able to implement the testing, contact tracing, and isolating that keeps spread low even during a reopening—but which can only be done when numbers are low enough. The U.S. in general has not had numbers low enough to do that since the beginning of the pandemic because we were too slow and too all over the place to take the necessary steps toward that goal.

With fewer cases, we wouldn't need to do as much testing, which would allow our testing capacity to build to a level where we could actually test everyone we need to.

We could also catch up on PPE production, and keep the mental health crises that go along with an uncontrolled pandemic limited to a couple of months instead of the ongoing nightmare we're in right now.

As Larry Brilliant, the epidemiologist who helped find the cure for smallpox, points out, we are smarter than this virus. "If it was just our science and the goodwill of American people, absent bad governance, we would have defeated it already. I don't mean we would have eradicated it, but we would have been much further along into kicking it into the dustbin of history."

Slavitt pointed out that even in countries that are now seeing an uptick in cases after having gotten numbers very low, the recent daily peaks are in the hundreds, not the tens of thousands that we're seeing in the U.S.

Think about what that would mean for us. For our medical workers. For the scientists trying to get a vaccine safely on the market. We've already started to get used to social distancing norms during the pandemic, but if we could get the virus under control, those measures would be a lot more effective.

Yes, it would mean 6 to 8 weeks of disruption. But in the big scheme of things, that's not that long. And we're already suffering through months of disruption anyway because we took a haphazard, disunified approach, which is harming us economically, emotionally, and epidemiologically.

And since we don't know yet if a vaccine will be the be all end all for this pandemic, we have to figure out how to manage without one for now.

Of course, as Slavitt points out, "The major objection to all this? People who think this infringes on their 'rights.'"

But we all give up some "rights" simply by living in a civilized society. There are rule and laws we all have to follow. We can't just do whatever we want—not when what we want to do puts others in harm's way. And during a pandemic, public health measures are designed to protect people, in the same way that food handling regulations and road safety laws do.

What about herd immunity? We don't know enough about how immunity with this virus works yet. Also, any attempt at reaching herd immunity means a mass number of casualties—not only hundreds of thousands of deaths, but millions upon millions of chronically ill people. Not ideal, especially when we actually can get this thing under control with a serious short-term strategy.

We all saw the Florida and Texas and Arizona outbreaks coming as governors tossed aside public health advice and citizens flaunted their "freedom" to gather in crowds, not wear a mask, and not do what needed to be done.

Really, it boils down to what it has always boiled down to—listening to the majority of epidemiologists who have prepared their whole careers for this moment and taking decisive, unified action that lines up with the science. The more we keep pretending that the virus isn't real, or isn't that bad, or is some kind of hoax or conspiracy that the entire world is somehow in on, the longer we're going to suffer.

Let's hit the reset button here—shut down for 6 weeks, pay everyone to stay home, and get our numbers down to a manageable level so we can keep them there. Let's be proactive instead of reactive. Let's stop being the world's poster child for what not to do in a pandemic. We may not be able to lead the world in a crisis at this point, but we could at least attempt not to embarrass ourselves any further.