The Senate's longest-serving Republican is standing up for Democrats — for a smart reason.

Sen. Orrin Hatch wants to save the filibuster. 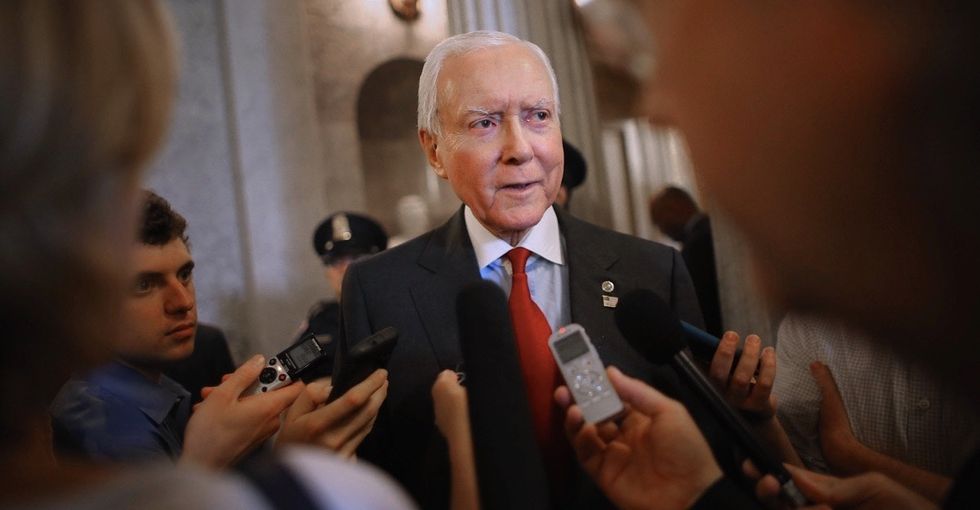 In recent years, the filibuster has become an increasingly important part of how our government operates (or, when used to the extreme, how it doesn't operate).

Right now, in the wake of the election, there's an important battle about the filibuster beginning to form that could help shape the future of our country for decades to come.

The filibuster is an old parliamentary tool that allows the minority party to band together to block or delay a piece of legislation. When the results rolled in on election night and the Republican party found itself holding the majority of all three branches of government, there was talk of trying to weaken the filibuster rules. Doing so would make it nearly impossible for Democrats in Congress to outvote their Republican colleagues or get enough votes to get their own bills passed.

Make no mistake: This is something the Republican Party could do if it wanted, when it sets the new set of standing rules in the Senate come January. All it takes is a simple majority of 51 votes (there will be 51 Republican senators at the start of the new session). There's even the so called "nuclear option," which would eliminate the filibuster altogether. But it likely won't, and what makes this interesting is who is resisting weakening the filibuster rules and what they're arguing for.

Sen. Orrin Hatch, the chamber's longest-serving Republican, is standing up for ... Senate Democrats.

Hatch, who has served nearly 40 years in the Senate, knows a thing or two about the importance of minority powers as a form of checks and balances.

Republicans will take control of the White House, the House of Representatives, and the Senate in January — something that's only been the case for four years of Hatch's tenure. It's a unique position to be in, for sure — one that many of his Republican colleagues are surely thrilled about.

Hatch thinks that eliminating the filibuster would be a very bad idea, and he's probably right.

The only thing standing in the way of enacting Republicans' plans — which could include everything from repealing health care reform to making crucial changes to Social Security and Medicare — is the filibuster. Without it, there's barely a reason for the Democratic minority to show up to work in the morning, and there's no incentive for Republicans to seek compromise.

That, in part, is why Hatch thinks we need to leave the filibuster as is.

Yes, the party in power should (and will) control the congressional agenda. That doesn't mean it should cut others out of the process entirely.

When the party in the minority abuses the filibuster and uses it to stop everything being pushed through by the majority party, it's easy to see why some would want to do away with it (especially those in the majority). When they were in power, Democrats vented their frustrations about the Republicans' tendency to use the filibuster to block everything from pieces of legislation to federal judgeships.

Politics works best when those participating do so with a sense of compromise in their approach.

In 2013, Senate Democrats criticized Republicans' use of the filibuster. Photo by Drew Angerer/Getty Images.

In January, as the Senate convenes for a new session, they'll vote on a new set of rules to determine whether or not to keep the filibuster.

Sure, wiping it out would clear the way for Republicans to get what they want right now. But as Hatch said, he knows what it's like being in the minority party. Come 2018, 2020, 2022, or 2024, the Democrats might regain control of Congress. There's no such thing as a permanent majority in U.S. politics.

Hatch, at 82 years old, is thinking to the future, even if it makes him a little less popular with his party in the present. Here's hoping his colleagues follow his lead, as some have already signaled they will.