The internet loves Miss Iceland for quitting a beauty contest after getting fat-shamed. 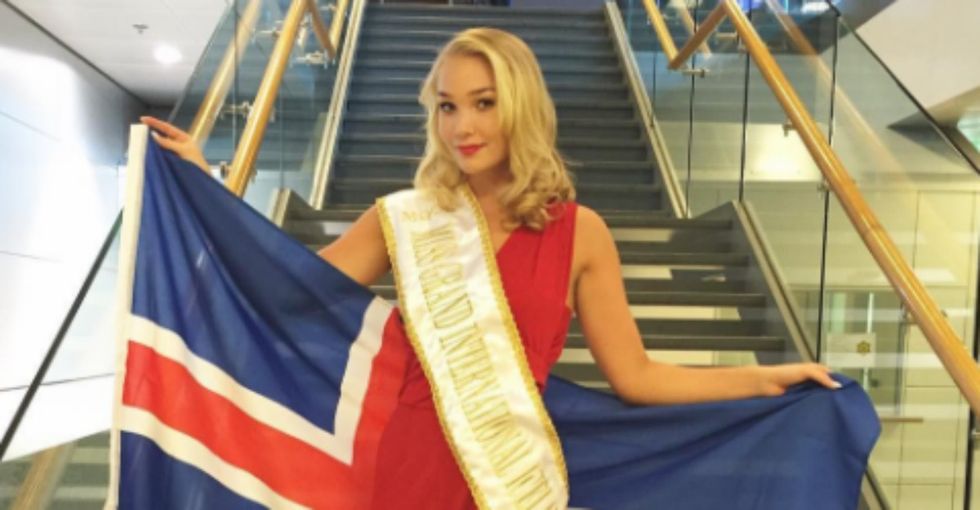 "We maybe don't understand each other," she once said of ending injustices, "but there is one language we all understand and should speak to stop the violence in this world — that's the language of understanding, kindness, and love."

Jónsdóttir was in the running for Miss Grand International, a world-famous beauty contest being held in Las Vegas.

But she just dropped out of the competition.

According to Jónsdóttir, she was body-shamed by the contest's owner.

And she's having none of it. Nawat Itsaragrisil, who owns the Miss Grand International contest, allegedly told Jónsdóttir that she was too fat to win, encouraging her to skip breakfast each day leading up to the competition, and to only eat salads and drink water to get by.

“I intend to stand up for myself, women everywhere, and the Icelandic people," she wrote. "I will not let them tell me I am too fat to look good on stage. I have quit. I will not be taking part in Miss Grand In­ternati­onal.”

“I am coming home a winner and the proudest Icelander in the world," her post concludes.

Jónsdóttir has gotten a lot of applause from people agreeing with her decision to quit.

“It’s a big disgrace how they [treated] you, not only for you, but to a lot of other younger girls," wrote one fan, The Daily Beast reported. "Wrong signal. You’re beautiful and please never change! We love you just like you are."

Not everyone was impressed by Jónsdóttir, though.

"Wait," wrote one Redditor. "She competes in international beauty contests, but this is where she draws the line against normative beauty standards?"

"So you're okay with being in a contest where you're solely judged on your looks," wrote another, "but only so long as they say nice things about you?"

Comments like that, however, forget that each of us have the authority to draw our own line when it comes to our personal comfort level, especially when it comes to the absurdity of beauty standards — after all, to some degree, we're all guilty of conforming to flawed cultural expectations around physical appearance.

One Redditor wrote in response to the critics:

"As much as you'd like to pretend that [everyday people] have no beauty standards, when you woke up today, you did some form of grooming, or hygiene. You showered or shaved or did something that conforms to a standard which was influenced by things you saw in the media and in the culture around you."

The GOP presidential nominee, who called Machado "Miss Piggy" about two decades ago, put immense pressure on her to diet and exercise after she gained weight following her 1996 pageant victory. He even had news reporters show up with cameras to document her fitness regimen.

The psychological burden on Machado — who was a teenager at the time — allegedly contributed to her years-long battle with anorexia and bulimia.

“Over the past 20 years, I’ve gone to a lot of psychologists to combat this," Machado said of the traumatic experience.

In Jónsdóttir's case, she has no qualms with saying goodbye to a pageant that won't accept her the way she is.

"If the owner of the contest really wants me to lose weight and doesn’t like me the way I am, then he doesn’t deserve to have me," Jónsdóttir said of the body-shaming, noting that she's proud of her broad shoulders because they reflect her time as an athlete.

As far as her plans to enjoy Las Vegas, now that she's in town anyway?