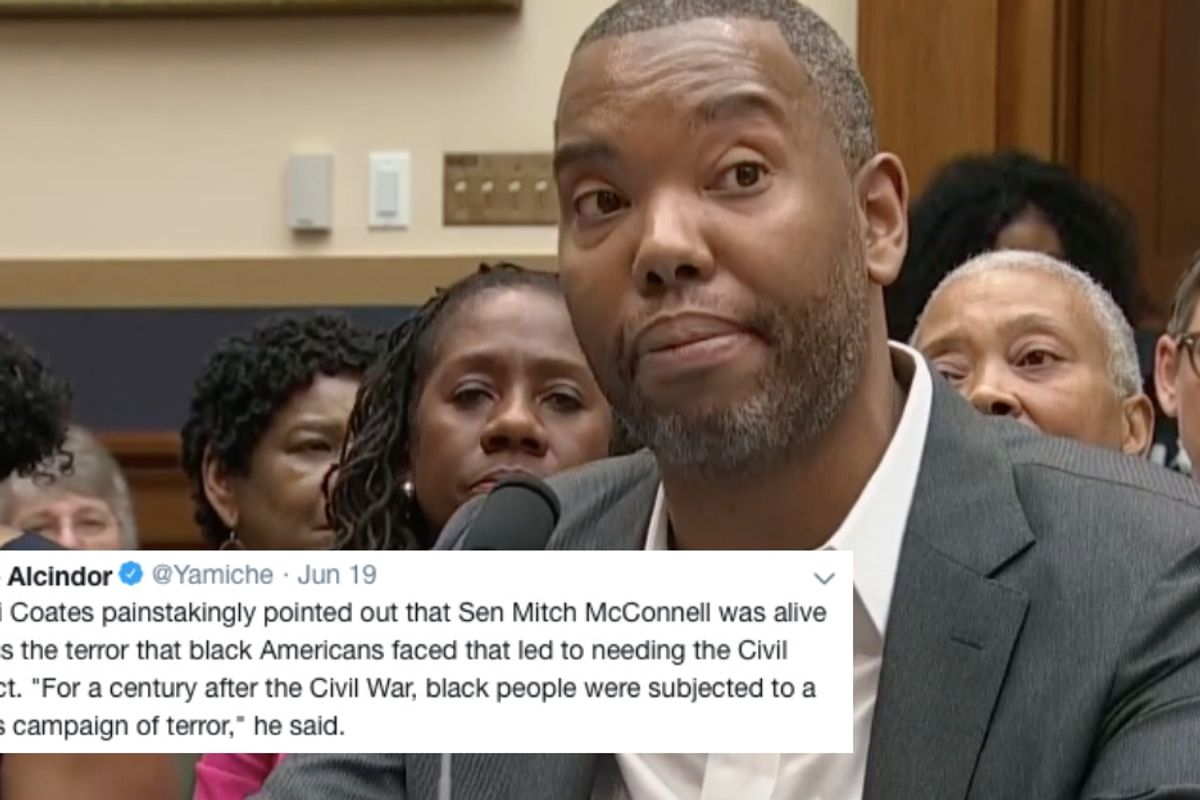 Senate Majority Leader Mitch McConnell (R-KY) said he doesn't believe in reparations because "no one alive was responsible" for slavery. If you agree, keep reading.

It's a common argument whenever slavery or the history of racial injustice in America is brought up:

"Slavery ended 150 years ago. None of us alive today owned slaves or were slaves. Lots of people have been mistreated throughout history, but's that's the past. Time to move on."

But we're all the same now, right? We all have the same legal rights on paper, so why keep looking to the past?

The problem with that argument is that it completely ignores the fact that the end of slavery was not the end of the systematic oppression of black people in America. Not even close. Even if it had been—even if true equality had miraculously occurred overnight—there still would have been ongoing generational effects from 250+ years of dehumanization and abuse worthy of exploring. But it wasn't the end.

Emancipation didn't eliminate oppression. Not only did the U.S. abandon the promise of "40 acres and a mule" after the Civil War, there were also still 100+ more years of blatant, legal and illegal discrimination against black people that followed it. Segregation, lynchings, Jim Crow laws, Black Codes, sundown towns, redlining, mass incarceration, and the list goes on. The Civil Rights Act solved some of the legal discrimination issues, but it didn't end the racism and legacy of white supremacy that has permeated U.S. history.

And neither emancipation nor the Civil Rights Act made up for the ongoing economic impact of hundreds of years of political, social, and economic oppression.

McConnell seems to believe that that doesn't matter, though. Answering whether or not he believes in reparations, he said,

"I don't think reparations for something that happened 150 years ago for whom none of us currently living are responsible is a good idea. We've tried to deal with our original sin of slavery by fighting a Civil War and passing landmark civil rights legislation. We've elected an African-American president. I think we're always a work in progress in this country, but no one currently alive was responsible for that. And I don't think we should be trying to figure out how to compensate for it.

Ta-Nehisi Coates offered a counter to McConnell's argument that is a brilliant must-watch.

In a House Judiciary Committee hearing on reparations June 19, Coates responded directly to McConnell's "no one today is responsible" argument, and in typical Coates fashion, it's brilliant.

Yesterday, when asked about reparations, Senate Majority Leader Mitch McConnell offered a familiar reply: America should not be held liable for something that happened 150 years ago, since none of us currently alive are responsible.

This rebuttal proffers a strange theory of governance, that American accounts are somehow bound by the lifetime of its generations. But well into this century, the United States was still paying out pensions to the heirs of Civil War soldiers. We honor treaties that date back some 200 years, despite no one being alive who signed those treaties. Many of us would love to be taxed for the things we are solely and individually responsible for. But we are American citizens, and thus bound to a collective enterprise that extends beyond our individual and personal reach. It would seem ridiculous to dispute invocations of the Founders, or the Greatest Generation, on the basis of a lack of membership in either group. We recognize our lineage as a generational trust, as inheritance. And the real dilemma posed by reparations is just that: a dilemma of inheritance.

It is impossible to imagine America without the inheritance of slavery. As historian Ed Baptist has written, enslavement, quote, "shaped every crucial aspect of the economy and politics" of America, so that by 1836 more than $600 million, or almost half of the economic activity in the United States, derived directly or indirectly from the cotton produced by the million-odd slaves. By the time the enslaved were emancipated, they comprised the largest single asset in America — $3 billion in 1860 dollars, more than all the other assets in the country combined.
The method of cultivating this asset was neither gentle cajoling nor persuasion, but torture, rape and child trafficking. Enslavement reigned for 250 years on these shores. When it ended, this country could have extended its hallowed principles — life, liberty and the pursuit of happiness — to all, regardless of color. But America had other principles in mind. And so, for a century after the Civil War, black people were subjected to a relentless campaign of terror, a campaign that extended well into the lifetime of Majority Leader McConnell.

It is tempting to divorce this modern campaign of terror, of plunder, from enslavement. But the logic of enslavement, of white supremacy, respects no such borders, and the god of bondage was lustful and begat many heirs — coup d'états and convict leasing. vagrancy laws and debt peonage, redlining and racist G.I. bills, poll taxes and state-sponsored terrorism.

What they know, what this committee must know, is that while emancipation dead-bolted the door against the bandits of America, Jim Crow wedged the windows wide open. And that is the thing about Senator McConnell's "something." It was 150 years ago. And it was right now.

The typical black family in this country has one-tenth the wealth of the typical white family. Black women die in childbirth at four times the rate of white women. And there is, of course, the shame of this land of the free boasting the largest prison population on the planet, of which the descendants of the enslaved make up the largest share.
The matter of reparations is one of making amends and direct redress, but it is also a question of citizenship. In H.R. 40, this body has a chance to both make good on its 2009 apology for enslavement and reject fair-weather patriotism, to say that a nation is both its credits and its debits, that if Thomas Jefferson matters, so does Sally Hemings, that if D-Day matters, so does Black Wall Street, that if Valley Forge matters, so does Fort Pillow, because the question really is not whether we will be tied to the somethings of our past, but whether we are courageous enough to be tied to the whole of them. Thank you.

Emancipation and the Civil Rights Act were ways in which the U.S. stopped directly harming black Americans. But they did nothing to repair the damage already done.

The word "reparation" literally means "to repair." That's all people are asking for. Not an unearned handout. Not an unjust advantage. Simply an attempt to repair some of the damage caused by racial oppression over the centuries and to repay families for the economic advantages the U.S. has enjoyed that stem directly from the institution of slavery.

The country as a whole benefited economically from slavery—that is indisputable—and the wealth it generated was never passed along to those who did the work. Our country's prosperity was literally built with black people's labor, and that prosperity was never shared with them. White slaveowners passed their wealth on to their descendants, white Americans were given the higher paying jobs, the better loans, the better schools, all while black Americans fought their way through additional obstacles after emancipation.

Our country owes the descendants of slaves an inheritance that is rightly theirs. At the very least, it owes black Americans a thoughtful conversation about what that might entail.