Student Body Armor is a joke, but gun violence isn't. 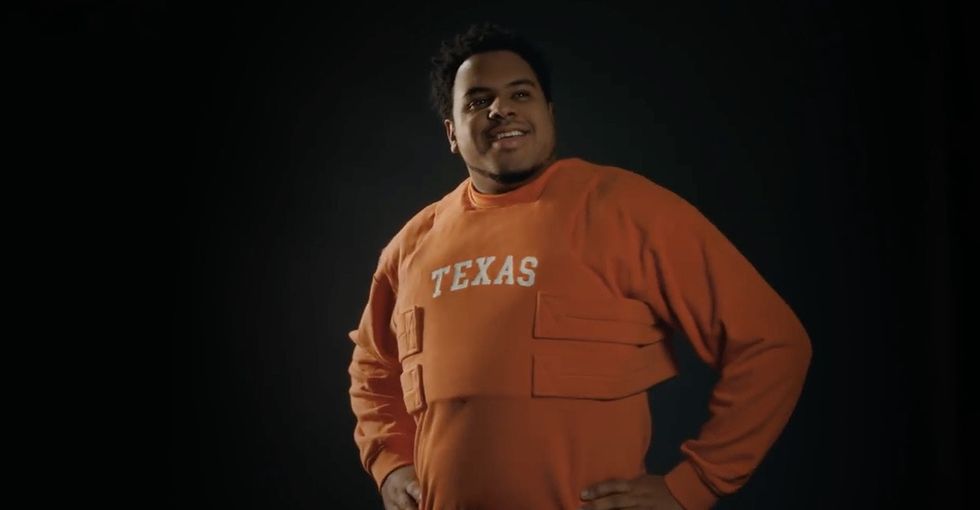 Did you know that in several states, pretty much anyone can stroll into their 9 a.m. freshman economics class armed to the teeth?

In September 2016, professors at the University of Texas-Austin found empty bullet casings around campus along with menacing notes meant to mock anti-gun advocates, reading "Triggered?" and "In the land of the pigs, the butcher is king. Oink... Oink... Oink." That same month, at another Texas college, one student accidentally fired a gun in one of the dorms.

Not only are there questions about whether these campus carry laws actually work in the "the only thing that can stop a bad guy with a gun is a good guy with a gun" sense, but there's also an intellectual cost to life on campus where you never know when what started as a healthy debate could turn deadly.

The brilliant minds behind the viral "cocks not glocks" protest have released a funny new video addressing their concerns with campus carry.

Hawking "Student Body Armor," a (fake) new product with safety and school spirit in mind, the video takes a tongue-in-cheek approach to fighting back against laws that would allow weapons on college campuses.

According to Cocks Not Glocks founder Jessica Jin in an interview with The Guardian, the goal of Student Body Armor is to use "absurd branding that makes people just slow down for a second and question what they value as acceptable in day-to-day life."

In that case: mission accomplished.

There are two things each of us can do right now to push back on the spread of campus carry laws.

The first is to get in touch with state legislators and voice concern about campus carry. Campus carry laws already exist in Arkansas, Colorado, Idaho, Kansas, Mississippi, Oregon, Texas, Utah, and Wisconsin. If calling from one of those states, push your legislators to seek repeal. If elsewhere, urge them to oppose those laws moving forward.

The second thing you can do, if you're a high schooler or anyone else considering where to attend college and you decide against a particular school because of the school or state's gun policy, is let the school's admissions office know why you didn't choose their school.

Because you shouldn't have to wear student body armor just to feel safe when you're going to class.