‘SNL’ star Pete Davidson’s apology to this war veteran turned into a moving call for unity. 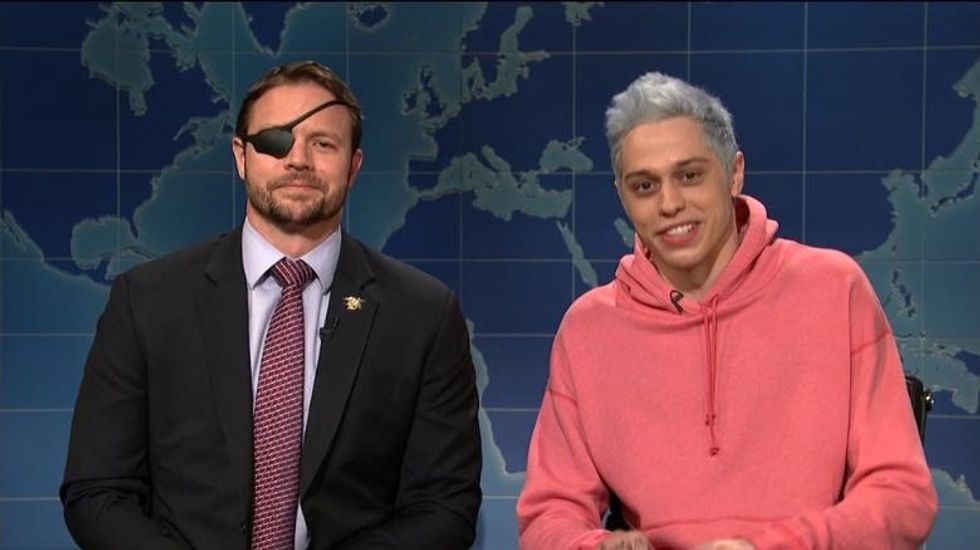 Crenshaw wears an eye-patch and only has partial vision in his other eye due to injuries sustained from an IED in Afghanistan while serving his third tour of duty as a Navy SEAL. It wasn’t so much the jokes that offended people (they were pretty mild) but that Davidson followed them up by saving, "I'm sorry. I know he lost his eye in war -- or whatever."

That stirred an angry reaction from the left and the right. So, in response, ‘SNL’ did what it does best and invited Crenshaw to appear on this past weekend’s episode. First, Davidson gave what sounded like a sincere, if mildly self-centered apology:

"I mean this from the bottom of my heart. It was a poor choice of words. The man is a war hero, and he deserves all the respect in the world,” Davidson said. "And if any good came of this, maybe it was that for one day, the left and the right finally came together to agree on something. That I'm a dick."

Crenshaw got in some delightful zingers at Davidson’s expense, making fun of his appearance and his recent breakup with Ariana Grande. And knowing his audience, Crenshaw, who will be heading to Congress in January, quipped:

“Thanks for making a Republican look good.”

After Crenshaw accepted Davidson’s apology, an Ariana Grande song suddenly began blaring to which he quipped, “Sorry, sounds like my phone’s ringing,” and adding, “Do you know her?”

But after all the barbs were thrown, Crenshaw shared some moving words about political unity, even making a heartfelt tribute to Davidson’s father, a firefighter who was killed in the attacks of September 11, 2001:

"There's a lot of lessons to learn here. Not just that the left and right can still agree on some things," Crenshaw said. "But also, this: Americans can forgive one another. We can remember what brings us together as a country and still see the good in each other. This is Veteran's Day weekend, which means that it's a good time for every American to connect with a veteran."

Crenshaw then offered some powerful advice for Americans interacting with military veterans.

"Maybe say thanks for your service. But I would actually encourage  you to maybe say something else. Tell a veteran: Never forget. When you say 'never forget to a veteran, you are implying that as an American, you are in it with them. Not separated by some imaginary barrier between civilians and veterans but connected as grateful fellow Americans."

"And never forget those we lost on 9/11, heroes like Pete's father."