She started fighting injustice as a kid. Now she's helping other kids be brilliant at it. 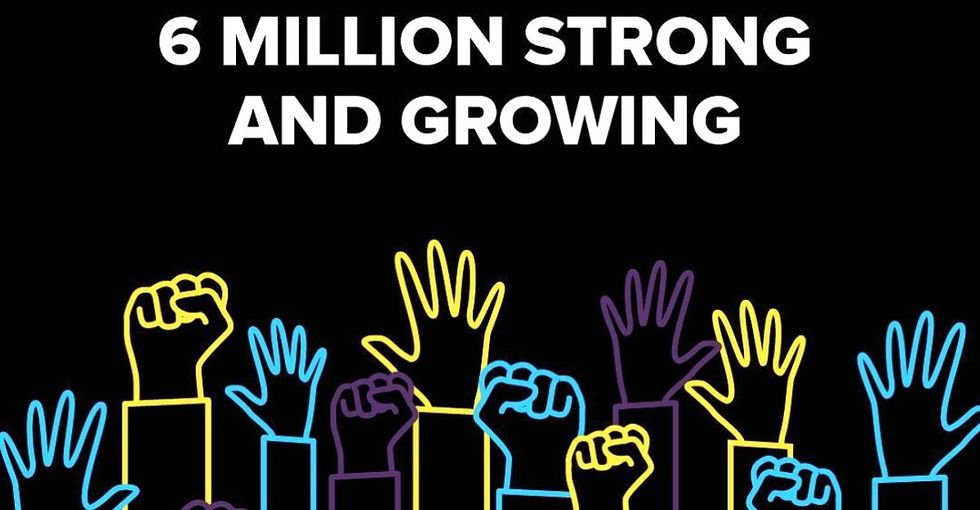 For as long as she can remember, Aria Finger has fought against social injustice wherever she's found it. Even when that fight ruffled some feathers.

For example, in a high school social studies presentation, way before she'd made social justice her career with DoSomething.org, she proposed this rather logical solution to the absurdly wide wage gap in America: the maximum wage shouldn't be greater than 40 times the minimum wage. Soon after, she found the word "communist" scrawled on her locker.

While no doubt jarring, it didn't deter her from her mission of advocating for those unheard voices.

"My parents instilled a deep sense of fairness in me, pointing out discrimination in all its forms," Aria writes in an email.

And this activism streak only grew stronger as she came into adulthood.

Thankfully, when she graduated from college and was looking for job in 2005, she came across a nonprofit that shared her personal mission.

DoSomething is a social change platform that works to inspire young people to get out there and make an impact on a cause they care about. At the time, the whole organization was just six people. It was also before social media tools like Facebook where widely available, so everyone was literally pounding the pavement to get the word out.

Obviously today, the way the organization operates looks much different, but the mission remains the same. The internet just made it a bit easier to reach the younger generations and vice versa.

Here's how you can get involved in one of their many social good campaigns:

You become a member by telling DoSomething what you're passionate about, how much time you have to devote to it, and what skills you have to contribute. You're then matched with a campaign (or several), which offers instructions on how to take action. Once you get started, you're invited to share photos of your progress with friends/fellow members to inspire others to get involved as well.

That's it. It's that simple.

OK-- let's give a double tap for all of this card making. 👏 Click the link in our bio to make a Valentine's Day card that'll make a senior feel loved! ❤️

Their mission spoke to young people in a big way. In just 13 years, DoSomething grew from under 100,000 members to 6 million.

It was just about fanning the fire of social consciousness that teens and young adults already possess.

"We’re standing by their side giving them the tools, resources, knowledge, and power to unlock their inner activist," writes Aria.

Of course, she also had a lot to do with this exponential growth. In 2013, Aria founded the DoSomething Strategic, an arm of Do Something that works with brands on reaching young people through various initiatives that live in the social good realm.

For example, they're currently partnered with Garnier's Rinse Recycle Repeat campaign, which is educating the younger generations about how to recycle their beauty products the right way. Half of Americans don't recycle them at all which is part of why beauty and personal care products make up approximately one-third of the trash in landfills. This campaign is working to shrink those statistics.

When your Rinse, Recycle, Repeat photo submission is so big it doesn’t fit on Instagram. 😂 This #DSMemberMonday shoutout goes to Victoria, who created 9 recycling bins! (Not all pictured here!) ♻️ 📦 “This campaign is important to me because we can make a HUGE impact with such a small change. Recycling helps our world, today and tomorrow!” 🌎 Want to join us and @garnierusa in saving the planet one recyclable beauty product at a time? Click the link in our bio! ☝️

And now, as the CEOs of DoSomething, she has a guiding hand in every aspect of the organization, which is perfect for an activist who could never pick just one area of social good to focus all her passion.

Aria talking to a colleague in the Do Something offices. All photos via DoSomething.org. Used with permission.

So, as you might imagine, it's almost impossible for Aria to choose just one social good campaign of her organization's to highlight. That said, here's one she loves that's started three months ago:

In honor of Ramadan, Sincerely Us is a campaign that encourages Do Something members to make homemade Happy Ramadan cards. All members have to do is send the cards in to DoSomething and they'll deliver them to every single mosque in America. The goal is to show members of the Muslim community that the younger generation sees them and supports them.

A DoSomething.org member with a Happy Ramadan card.

Another notable one, Teens for Jeans, calls on young people to donate their gentle used jeans, because it's the number one requested item from younger homeless people. According to DoSomething, there are approximately 1.7 million homeless teens in America. After the campaign was live for just five weeks, they'd collected enough jeans to clothe half of them.

But it's not just about finding solutions to the problems of today. DoSomething is also committed to getting young people to focus their activism on tomorrow, too.

Case in point, their partnership with Garnier is helping young people and adults alike clean up their recycling act so that the world is cleaner and healthier for future generations.

And again, it's a very simple mission — all you have to do is collect your empty beauty products. Once you've accumulated 10 pounds, mail them to TerraCycle — Garnier's other partner in this campaign.

DoSomething is also sharing photos of members completing the mission on social media to inspire others to join the movement.

Reduce Waste to Make a Better Place #empties! This #DSMemberMonday, we are so proud of Aiyana, who decorated 5 bins for Rinse, Recycle, Repeat. 💆‍♀️ “There is so much waste that goes on everyday. If just one person can recycle their goods, that can help impact the earth in a powerful way.” 🌎 Want to keep your beauty routine eco-friendly? Join Rinse, Recycle, Repeat with us and @garnierusa! Link in the bio!

None of this is to say activism is easy. It involves a lot of hard work. But as long as idealistic, passionate young people are taking initiative, no social good mission is too big.

That said, access to tools of engagement, like the internet, is keeping some of them from getting involved. It's Aria's ultimate goal to see every young person who wants to do good working on a DoSomething campaign, or something like it in the not-too-distant future.

"I want every young person, regardless of income, geography, race, etc. to have the opportunity to volunteer, lead, and make change," she writes. "Nothing makes you feel more powerful and confident than seeing that you can make the world a better place for your fellow humans."