She found the perfect place for all of your discarded toys: in the hands of kids in need. 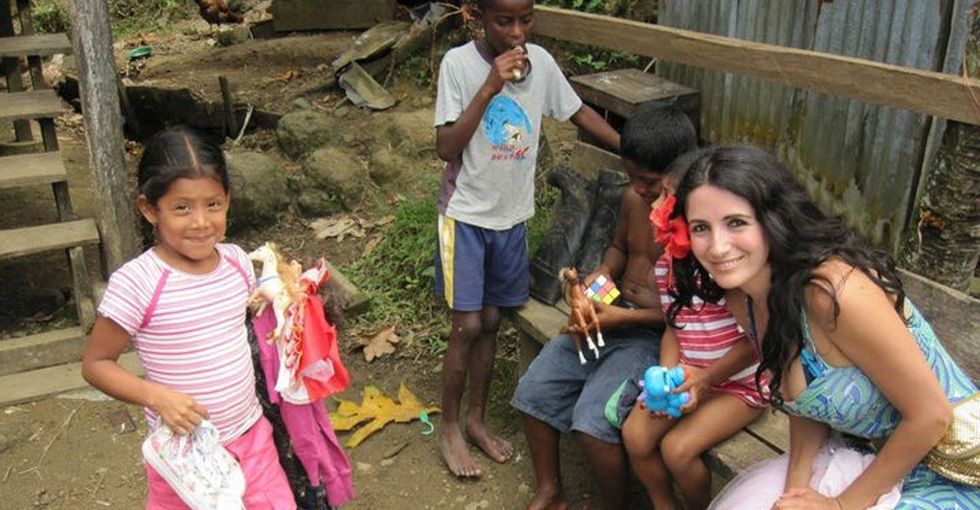 She doesn't like to compare herself to Santa Claus, but for hundreds of children, she's been just that.

All photos courtesy of Rina Fernandez, used with permission.

Meet Rina Fernandez, a 40-year-old living in Van Nuys, California. To fully understand her mission, it's essential to know where she came from.

Rina experienced poverty while growing up in Venezuela. She remembers how much she loved toys as a kid, even though she didn't receive them often.

"If I was lucky, I'd get a toy or two a year," Rina told me. "Looking back on it now, the toys weren't very nice at all, but back then, I thought they were the most amazing things ever."

Her father greatly influenced how she thought about toys, particularly when she saw his generosity.

A young Rina (smiling, wearing blue shorts) with her family.

"Even though I grew up in poverty, my dad had a good job as a carpenter, and we were better off than the majority of people in my neighborhood," Rina recalled. "But one thing I noticed about my dad is he would use what little free money he had to buy toys for the other kids in my apartment complex who were less fortunate than we were. To see the joy on those kids' faces is what started my journey to give."

Rina wanted to see more smiles from children, so she decided to do something about it.

A few years after relocating to America, Rina met the love of her life, Jared, a supply officer in the United States Navy. They married when she was 19 and they're still happily together two decades later.

Shortly after tying the knot with Jared, Rina decided to act on her strong desire to give back to children growing up in poverty like she did.

Her idea: find a way to give toys to children in need.

In 1996, she planned her first trip to bring toys to poor children in Venezuela. The budget was $10,000, which was the maximum spending limit on the family's credit card, and it was used to pay for food, travel, lodging, and all the toys.

At first, Jared was a little skeptical due to the amount of money going into the project, but it didn't take long for him to get on board. "She's all about making the world a better place by making others happy," Jared told me. "How could I not support that?"

First, Rina visits secondhand stores and buys as many toys and dolls as she can afford. She mentions that she's "not very popular" there because many customers just assume she's a greedy person who's reselling the toys for a profit.

Of course, that couldn't be further from the truth.

Rina stuffs her cart with as many used toys as possible.

Next, she cleans the toys thoroughly. She also does what she can to fix the ones that are damaged. This task often takes hours out of her day, but she doesn't mind. "These children have dignity," Rina said. "I'm not going to give them dirty or broken toys. I want them to be the highest quality possible."

"I'm not going to give them dirty or broken toys," Rina said.

And finally, she packs the toys into as many bags as she possibly can and takes them to impoverished countries.

She usually depends on the help of her friends and family members to assist with the expenses. Jared, their 18-year-old son Jared Jr., and other friends often come along.

Bags upon bags filled with toys to deliver to impoverished children.

Seeing the joy on the faces of these poverty-stricken children is what she lives for.

The happy little boy below is one of five children being raised by a single mom in Oviedo, a small town on the southwest coast of the Dominican Republic. When Rina arrived, the children were completely naked, found in a shack with no electricity or running water. Within minutes of providing toys and clothes to the family, other neighbors stopped by to witness the event.

According to Rina, he couldn't stop smiling.

This is one happy little boy. GIFs from "One Toy at a Time."

Rina and her small team have visited 22 countries in the past 18 years to deliver small gifts throughout the world.

She's reached hundreds of children. But why focus on toys? Why not just donate money instead?

For starters, toys help to create a child's sense of imagination and ownership. "These kids have nothing," Rina told me. "Often I have to spend time with the children convincing them that the toy is theirs. They can protect it, feed it, bathe it, negotiate with it, or do whatever. Something as simple as that is something they rarely experience. It's powerful and special."

Toys help kids learn. According to Peter Grey, a research professor at Boston College*: "Toys help children to explore possibilities of different characters and worlds. Doing so requires a great deal of intellectual effort and helps to exercise social abilities."

She's skeptical of donating. "The reason I don't just donate money is because I don't know where it goes," Rina told me. "Will the people who need the money actually get it? At least when I visit these places, I know they'll get something because I'm the one handing it to them."

Rina and Jared are not wealthy. Far from it, actually. Jared works for the U.S. Department of Defense as a contract administrator and is also in the Navy Reserve. Rina is an actress who works in commercials, a career that doesn't always provide a steady income. Currently they live in a modest trailer in Van Nuys, a neighborhood in the San Fernando Valley region of Los Angeles.

Would they love to donate thousands of iPads instead of secondhand dolls and clothes? Would they love to combat poverty at a systemic level? Maybe. But they're doing what they can with the means afforded to them. During a good year, they're lucky to bring home a combined $70,000 in salary. That's pretty good in today's world, but once you factor in that this project now has a yearly price tag of $35,000 to execute, it changes things.

"We don't have a big house, cable television, fancy restaurant dinners, or the newest computers," Rina says. "But I have the greatest husband in the world, a wonderful son, and a great mission. When I look at those children smiling, I know that we are truly making a difference."

In a world of armchair activists where everyone has an opinion on how someone chooses to improve the world, I hope people will look at Rina and be thankful that she's doing something. In this instance, the "something" she's doing is extremely valuable.

Rina is always hard at work.

Although Rina is a very happy woman overall, there is one thing that brings her to tears.

The painful reality that she can't do it alone.

No matter how hard she tries, and no matter how many toys she brings, there's no way that every child will receive one. That absolutely crushes her.

After keeping the project in relative stealth mode for almost two decades, she knew it was time for a change, so she and Jared began reaching out to the public.

Rina and Jared admit to not having the time or expertise to manage a full-blown nonprofit, so they've partnered with an organization that receives 5% of the contributions to cover administrative and management costs, letting the couple focus on delivering toys and smiles.

"I didn't want the attention before, but now I know we need help," Rina told me. "I feel like I've done a lot, but there is only so much I can do."

You can't put a price on the happiness of a child.

Rina and her team are going to make their final trip of 2015 to Nicaragua before Christmas. Even though many view her as Santa Claus, she shrugs off any comparisons. She just wants to see more kids grow up to be happy.

"Happiness is measured in smiles. If these toys can help more kids smile and learn, they will hopefully become happy adults."

Speaking of smiles, this little girl below has a beautiful one. Her mother worked long hours selling coconuts near Santiago, the second-largest city in the Dominican Republic. The doll Rina provided moved the mother to tears and gave this little lady one of the happiest moments of her life.

Another happy child, thanks to Rina.

Sometimes it takes a toy and a smile to realize how great we have it.